Andrea Belotti dedicated Italy's 2-0 win over Poland to Roberto Mancini, who continues to self-isolate after testing positive for COVID-19. 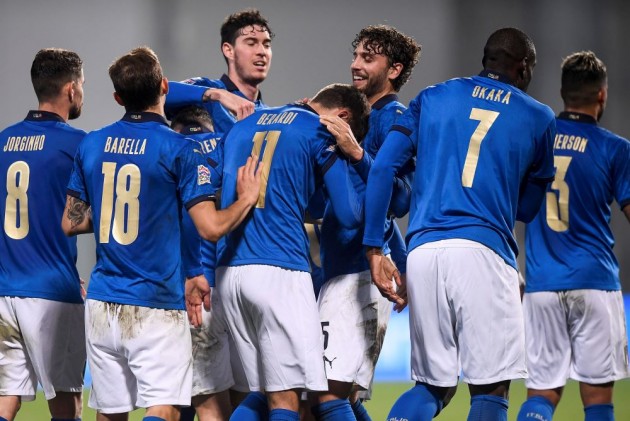 A Jorginho penalty and Domenico Berardi's late strike secured a comfortable victory for Italy on Sunday, taking them to the top of Nations League Group A1 with one match remaining.

Another win against already relegated Bosnia–Herzegovina on Wednesday will guarantee Italy a spot in next year's finals of the tournament, while a point would be enough should Poland draw with the Netherlands.

Mancini is in isolation at his home in Rome but Torino striker Belotti – who won the spot-kick from which Jorginho opened the scoring and also drew two fouls which saw Jacek Goralski receive a red card – hailed the spirit in Italy's squad.

"We are like a family, so coming back here is like a father embracing his son," Belotti told RAI Sport.

"That's how we all feel when we come on international duty, we just need to look each other in the eyes to know what we're doing.

"We dedicate this win to the coach, and also to everyone else who is self-isolating at this moment.

"We heard from him before the game, knew how sad he felt not to be here, so the dedication is for him."

30 - Domenico Berardi's goal came after 30 passes, the longest sequence before a goal scored in a Nations League match. Tiqui-taca.#ItalyPoland pic.twitter.com/6EA8Pz9TTk

Italy dominated from the off, amassing 19 attempts on Poland's goal in total, with the visitors failing to test Gianluigi Donnarumma at the other end.

Jorginho's penalty meant that, for the first time since Opta began recording such data in 2008, Italy have converted three successive spot-kicks, while Berardi's effort came at the culmination of a 30-pass move – the longest sequence leading to a goal in a Nations League match.

"It's what I asked of these lads before the game and they were extraordinary, we stand by the attacking principles of football and Roberto has been working on them for two years.

"When you stick with it, in the long run, you are rewarded. I spoke to him [Mancini] at half-time, he said we deserved a few more goals, so we need to be a little more efficient upfront, but the overall performance was good."