The ceremonial installation of the sacred flag mast had begun today at 11.50 am. 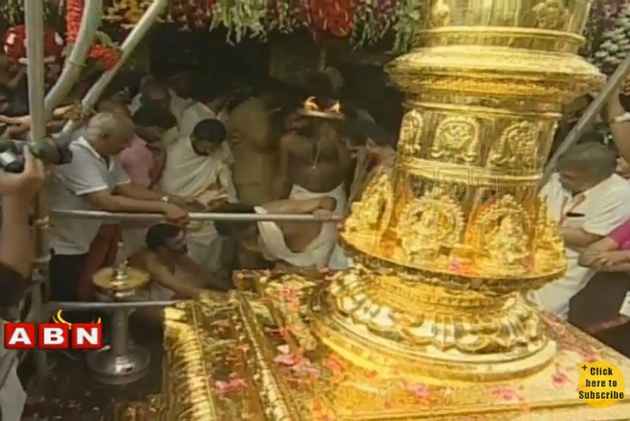 The newly installed golden mast at the Sabarimala temple in Kerala has been allegedly damaged by pouring mercury by unknown persons. The police have arrested three men, suspectedly hailing from Andhra Pradesh, in this connection, reported Malayalam television channels.

Sabarimala is one of the largest and most famous Hindu pilgrimage centres.  It is located at the Periyar Tiger Reserve in the Western Ghat mountain ranges of Pathanamthitta district.

The ceremonial installation of the sacred flag mast began today at 11.50 am. It was a three year effort to make the new gold plated temple flag mast for the Sabarimala Sanidhanam. On June 18, a devaprasnam (an astrological ritual done to interpret the will of Gods) was conducted and it was found that the old flag mast must be replaced.

According to Mathrubhumi, the damage was caused due to alleged pouring of mercury on the panjavarga thara of the mast. The gold in that portion has been diminished, the report adds.

Terming the incident as “serious”, Kerala Devaswom board minister Kadakampally Surendran told Asianet News that the incident might have happened due to dispute or rivalry between groups involved in the installation of the flag post.

The report says CCTV camera images obtained by the police show three persons pouring something on the panjavarga thara.

According to a report in The Hindu, the 12-metre-long, finely chiselled, teakwood mast was specially prepared by immersing it in medicated oil for one year. A team of master craftsmen from Parumala had made the cylindrical copper coverings (chembu-para) kept around the teakwood. All the cylindrical pieces and the small idols kept on the temple mast are covered with gold plates. A total of 130 kg of gold had been used, the report adds.

On September 16, 2015, a 64-year-old ideal teak tree, was cut without letting it touch the ground. It was taken to Pampa where the wood was covered with turmeric and camphor and kept for curing. Then on October 2016 it was further covered with special mixture of herbs in the Pampa auditorium.  On February 17, the old flag mast was removed.

On May 1, the teak wood which was kept securely was taken out and wrapped in a cloth. On April 9 the gold works began. On May 22, nearly 2000 devotees carried the wood without letting it touch the ground to the top of the Sabarimala hill. On May 26, the new flag mast was placed in the sacred spot and on June 19 the rituals for the purification of the flag mast began.

(With inputs from Kerala)