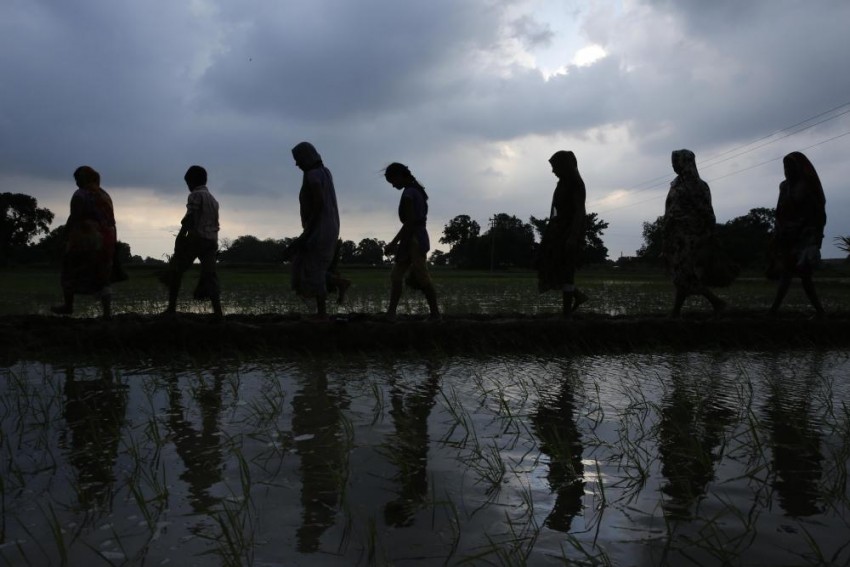 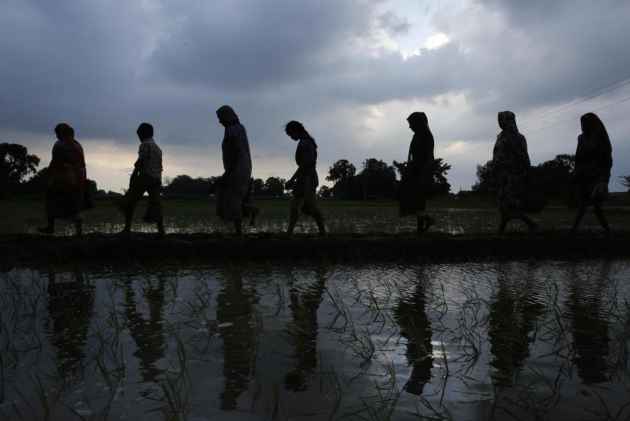 Debt trapped Vijesh Chaturvedi of Rewa district in the state is toiling at a construction site in Bhopal. "I had run up a debt of Rs 1,60,000 and there was no way I could have repaid it, staying back in my village," Chaturvedi says. He is among thousands of people who have migrated to escape worsening situation in his village. By his estimate around 40 per cent of people in his and nearby villages have migrated to towns in search of jobs.

In fact, innumerable migrants from several other states are also trying to eke out a living in Bhopal like Guttu Bai of village Purushottampur of Saharsa district of Bihar with her four children and husband or Muru Bai and her husband from Chhattisgarh.

A common thread of erratic monsoon, failing crops, rising debt and no jobs over the last two years has driven them to Bhopal to earn enough to repay debts as there has been no relief forthcoming from the government.

Muru Bai, 35, is happy that they are able to make around Rs. 5,000 per month, which, she says, is "much more" than what they were earning in their village. Owing to a series of natural disasters including scanty rainfall and excessive rainfall in different places, frost, hailstorm and attack of hitherto unknown pests, crops were ruined in various parts of the state at different times.

Though the state government has distributed upwards of Rs 5000 crores as relief to the farmers it has not sufficed to help the farmers, many working on leased land, to make up their loses. The growing indebtedness has sent rural economy into a downward spiral which has resulted in increasing migration.

What is however surprising is that for the last four years Madhya Pradesh has been consistently winning the krishi karman award instituted by the union government for highest growth in food grain production among big states. Opposition says that if the food production is actually growing, why did the government distribute relief to the farmers? And if the crops have been destroyed, how can the production rise? They allege that the government has fudged figures to win the award. Government also does not have an answer to the very obvious question that when it is distributing thousands of crores of rupees as relief to farmers for crop loses, how can the production data show a rise?

From being known as the 'Soya State' of India just a decade back, over last two years, the soyabean production in Madhya Pradesh has been showing a downtrend. In August-September 2014 the Soyabean crops were affected because of excessive rains. This year, soyabean was sown on around 58 lakh hectares of land, of which 18 lakh hectares has been destroyed due to a pest called Yellow Mosaic Virus. Last year, the soyabean production dropped from 84 lakh MT to 63 lakh MT and this year, it is expected to be even lower – much lower than the government's target of 78 MT.

In October last year, Murat, a tribal farmer of Basinda village in Betul district of Madhya Pradesh, committed suicide after his crop on one-and-half acres of land was destroyed for two consecutive years. He had no way of repaying Rs 95,000 owed to a bank though two of his sons had left for Gujarat in search of job.

Social activists working among the tribal and farmers say that there is nothing new about migration of workers in search of jobs. However, till a couple of years back, it was confined to migration to the district headquarters town.  "What, however, has changed is that now the farmers and agricultural labourers are increasingly migrating to other states,” says Anurag Modi of 'Shramik Adviasi Sangathan'. This translates into language problems for the unlettered labourers, who are unable to approach the local authorities in times of need. Moreover, the labour contractors ensure that they never have enough money to return home.

Another distinct change is that unlike earlier, now even tribal farmers are in distress. For the first time in the history of the State, last year, six tribal farmers committed suicide in the Betul district of the State, says Anurag Modi. "The tribal farmers were never wholly dependent on farming. A major part of their income came from collecting and selling minor forest produce. However, with the fruit-bearing trees giving way to timber trees like Sal and Teak, the tribal can no longer bank on forests for filling their stomachs", adds Modi. .

Another activist Ashif Shaikh Director Jan Sahas, who has been working among farmers and farm labourers in the Malwa region for more than a decade now, says that mechanisation of agriculture and road construction has deprived the labourers of a major source of employment. Riddled by corruption, favouratism and administrative lethargy, even the rural employment scheme NREGA has failed to provide the much-needed succor to the unskilled labourers looking for a job. "Figures are fine but the implementation at the ground level is dismal," stresses Ashif.