India perceives South Africa to be vulnerable in this area and would now be further emboldened. Ironically, it was not the spinners who precipitated the crisis. It was Irfan Pathan. 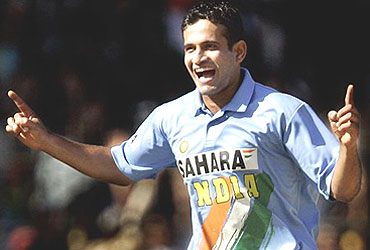 It was no secret that spinners would matter in the match, perhaps in the series. India perceives South Africa to be vulnerable in this area and would now be further emboldened. But there is also the danger they could overplay the card.

South Africa is not as bad against slow bowlers though different conditions tend to complicate matters of footwork. The pitches in the two countries bear little resemblance in pace or bounce. We would see if the remaining week of the series is enough to come to terms with these conditions.

Ironically, it was not the spinners who precipitated the crisis. It was Irfan Pathan. South Africa would like to hold him up as the culprit.

I am very impressed how quickly he assesses the conditions and opponents. There is a sense of plan in his methods.

I have noticed pacemen in these conditions tend to bowl straighter and slower around the seam. If you have the control and shape the red cherry well, you are on your way. He did it with Graeme Smith and later another fine example of it was served by Shaun Pollock.

In the sub-continent, pulling back your pace could be decisive.

So spinners actually did not wreak the damage; they merely picked up the spoils. In one-dayers, it is very difficult to come back if you lose early wickets.

India made a good start and built on the advantage as the innings wore on. South Africa could not have risked too much and it made the spinners' job easy. I wonder if it would still have been the same if South Africa were 50 for no loss.

There is no mistaking the merits of Smith's men. It has many match-winners with depth in batting and bowling. Justin Kemp's name is quick to recall though Jacques Kallis could as effortlessly shift gears and is an excellent finisher of a game.

It still would have served this team greatly had Jonty Rhodes been around. Besides his other values, he was an exciting player of spin. Somebody needs to put up his hand and cast himself in Jonty's mould.

I have been told Indians are backing themselves to snare Smith in the spin trap. Much of this is evident in the manner he bats and the way he throws his bat at the ball. But Smith has a fantastic record and is still improving.

For all the spotlight on him, he is still only 23. He will start to get better and his range would expand.

As it is, he is very good in giving the team a good and quick start and his 50s and 60s are often the platform for others to hit their 100s. In this heady year when South Africa has won everything and lost only an odd game or two, Smith has been the key. Over 800 runs at 48-plus point to his influence.

Hopefully on a tour such as this, Smith would learn to play quality spinners better. He has got to put together a plan to come good on slower wickets.

I have noticed that batsmen coming from South Africa to slower wickets tend to fall over in their strokes. The key is to keep their balance and wait for their shots longer.

There was a contest within this match-up which I had looked forward to and it did not take place. Pollock and Makhaya Ntini operating against Virender Sehwag and Sachin Tendulkar could be a classic duel. Both pairs work well in tandem and have been enormously successful with their methods in one-day cricket. South Africa have not seen the best of Tendulkar and they hope it stays that way!

The South African pace attack is not to be trifled with. Pollock and Ntini have a pool of experience which they have shared with Andre Nel. They know the importance of line and length and variations in this part of the world. It is hostility by other means.

It is also evident the Indians have improved as a fielding unit. Come to think of it, all teams in international cricket have made strides in the field. It is now accorded an importance similar to batting and bowling.

The Indians have also drawn notice on a few of their youngsters but such is the length and breadth of the country and the uncommon passion for the game that a few exciting talents are always waiting in the block.

It appears to me an evenly matched series between two units who would not like to retard the progress of recent months. Both have a number of match-winners.

The challenge is greater for South Africa because of alien conditions but India cannot drop their guard for a moment.

The strife for booty has begun in earnest.