Monsoon 2017 is making a slow advancement upcountry even as the earth is moist in the capital, where a three-concert evening saw a couple of monsoon ragas rendered this week. What all make the classical tunes stimulating? 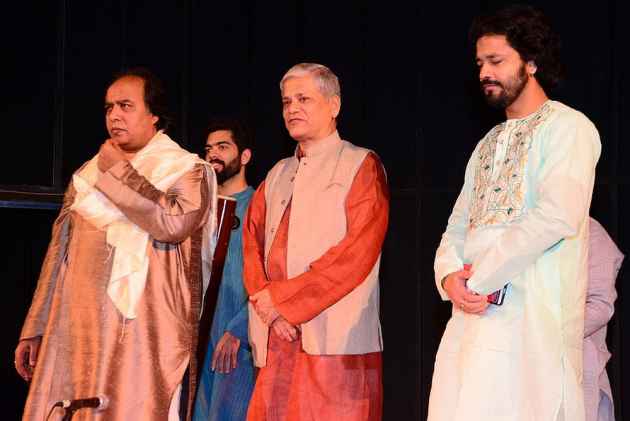 The little boy is seen running away from the camera along a narrow path amid shrubbery down to what contrastingly pops up as sprawling paddy field. The sky above the siblings is overcast; the trembling nature around seems readying for the first shower of the season. “Durgaa…’” calls their mother, as she hurriedly collects the washed clothes spread across the line that sways in the wind. The loud plea makes no impact on the early-teen daughter and her younger brother, who venture into the drizzle and play gay abandon even as the showers thicken.

It’s a pioneering monsoon scene from a landmark Indian film. The 1955-made Pather Panchali is the first in the iconic Apu trilogy by Satyajit Ray. The globally-renowned director (1921-92) was also knowledgeable about music, including Indian classical. Interestingly, the suave Calcuttan chose to settle for Desh, a Hindustani raga that is more associated in modern times with patriotism than rains. Admitted, the music in the 125-minute movie was by sitar legend Pt Ravi Shankar, but then a finicky filmmaker like Ray also would have had his bit of opinion on the matter before the work was released for audiences.

In short, it is not that the ‘enlisted’ monsoon ragas alone can bring in the mood of rains. In films, it depends primarily on the mood generated by the visuals, while the viewer’s reaction itself is a very subjective matter. If the north Indian classical music system primarily brackets the famed ragas of the Malhar family as those associated with the country’s monsoon, the picture that its notes sketch in the listener’s mind may range from brooding loneliness to group celebration.

That is why Brindavani is widely associated with afternoon—warm, vacant and lazy—and, say a raga like Megh Melhar, whose notes aren’t too distant from the former’s, is invariably related with peak monsoons. After all, both the melody-types are a derivation of the same Thaat (parent scale): Kafi. Down the country’s peninsula, the Carnatic stream has Kharaharapriya as the equivalent of Kafi. Presumably, a raga like Brindavana Saranga in the Deccan sounds very proximate if not identical to Brindavani. (Some say both are same.)

This closeness in the tunes and yet the contrasting moods they are expected to generate is one kind of musical piquancy that has an equally amusing pattern on the ground as well. For, monsoon doesn’t hit the whole of India the same time. It is basically a moisture-laden wind that travels across the chunk of the country after hitting base at the southern tip of Kanyakumari, typically in early June. The rain-distributing journey trundles its way up the peninsula to enter east and central India and eventually enter the northern plains, by when the rains would be far milder what with lesser moisture the winds carry.

Which means during early monsoon time, parts of the country would be drenched in rains, while there could be vast swathes of parched land waiting for the first drop of solace from heaven. As is the case now. That makes it the best time to deliver ragas from the Malhar family (comprising no less than 36 members) for the first lot and those wistful afternoon tunes like Gorakh Kalyan or Madhmad Sarang…

This week, amid sporadic but longish rains Delhi got ahead of the monsoon, the metropolis saw two rain ragas unfolding at a three-concert evening of Hindustani classical on Thursday. Megh on a vintage instrument and Miyan ki Malhar in vocals lent the seasons’ flavour at the monthly event organised in the national capital by the Jaipur-based Ustad Imamuddin Khan Dagar Music Art & Culture Society. Surbahar maestro’s Pushpraj Koshti Megh was succeeded by Drupad musician Wasifuddin Dagar’s Miyan ki Malhar at the 24th Gunijan Sabha, which began with a vocal Khayal rendition by 36-year-old Amjad Ali Khan who delivered evening raga Puriya Kalyan steeped in the Kirana gharana aesthetics. Incidentally, the March episode of the sabha saw senior vocalist Gokulotsavji Maharaj’s lecture-demonstration referring to Sarang’s emergence from ‘Megh’.

All said and done, south Indian classical counts Amritavarshini is the rain raga (though it’s another matter present-day Tamil Nadu, where Carnatic music grew has always been a monsoon-shadow region). Amrithavarshini’s symmetric pentatonic scale makes it sound close to the major raga called Kalyani, which has the night-hour Yaman as its Hindustani counterpart. That is for another column this rainy season.

Back to the rain scene in Pather Panchali, it is on a middle-ager’s bald head that a drop falls from heaven, waking him to fact that the monsoon has set in. Perhaps, ragas for Indian seasons are matters of intellectual stimulation as well.