Like Hindutva, Ram Mandir and Yoga, the national language has ended up as a self-aggrandisement tool for Prime Minister Narendra Modi and his party. 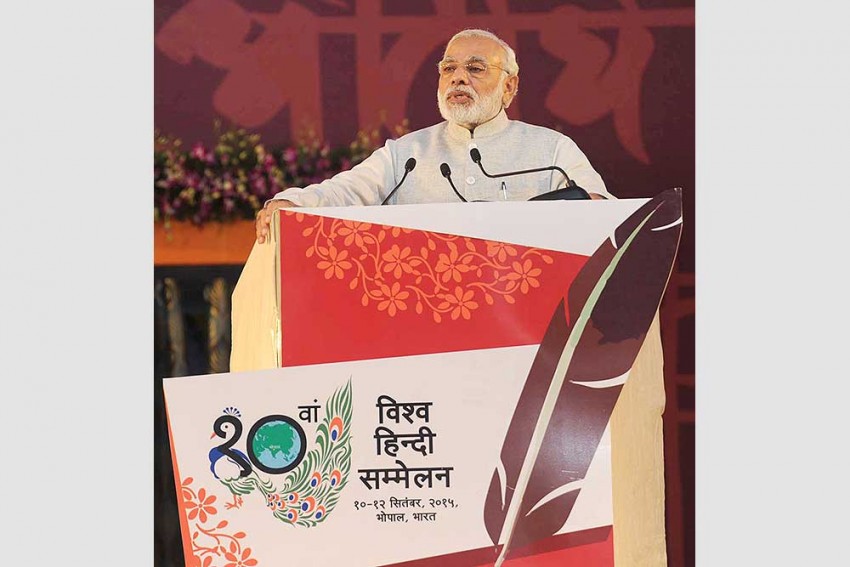 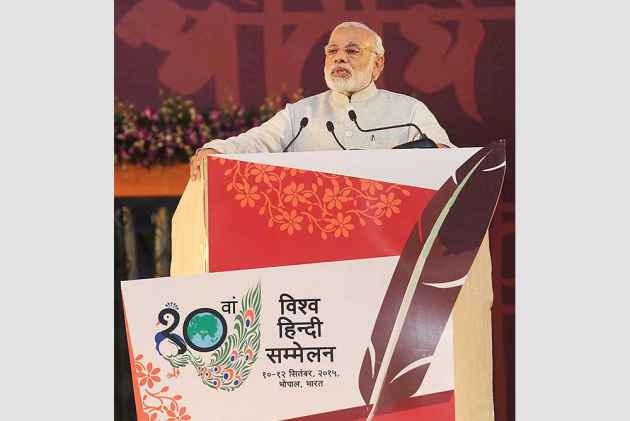 The shift in paradigm was unmistakable as the 10th World Hindi Convention was flagged off at Bhopal. Unlike the previous conventions that were steered by the literati and literary debates, the Bhopal session handed the lead to the promoters of the language who need not be writers or intellectuals.

Like Hindutva, Ram Mandir and Yoga, the national language has ended up as a self-aggrandisement tool for Prime Minister Narendra Modi and his party. The BJP sent an unabashed message to reinforce this view during the run up to the convention.

For the 90 minutes that Modi spent at the Convention he hogged the limelight. He appeared to have already been treated as the sole objective and obsession of the convention. Numerous billboards with the Prime Minister's photos obtrusively lined up on the roads from the airport to the venue of the convention. Like he has hijacked Teachers' Day, Modi snatched the Hindi convention too. Tulsi Das and Soordas and other doyens of Hindi quietly share a fourth of the space as secondary citizens on the hoardings placed at intersections.

The star-struck organisers have preferred actor Amitabh Bachchan over others to make a concluding address on Saturday.

"Our focus is on how use of Hindi could be expanded in science, medical courses, engineering, administration, law etc. Literature and laureates have had central focus in successive Hindi conferences but it is not the case this time round," says Anil Madhav Dave, senior RSS functionary BJP member of Rajya Sabha and vice-president of the organising committee explaining why writers have been overlooked for the convention.

Political discrimination was reflected in the guest list. The First Citizen of the state Ram Naresh Yadav, in office despite being named in the Vyapam scam, was invited after being dropped initially.

So, who were invited to the convention?

The 51 district collectors were assigned to fetch 50 "Hindi Hitaishis" (well-wishers of Hindi) to the convention. The public is left to speculate on who makes it to the convention with this tag.

Union Minister Gen V K Singh defended the treatment meted out to the writers saying the previous conventions witnessed bitter rivalries among litterateurs. This convention will focus on development of the language and its propagation world over.

Of the 177 countries that took part in the World Yoga Day in June only one was taking stock of its political gains for the national party on the domestic front. The presence of representatives from 39 countries has encouraged the organisers to believe they can get Hindi the status of an official language at the United Nations.

Madhya Pradesh has been home to some heavyweights of Hindi literature like Bhawani Prasad Mishra, Makhanlal Chaturvedi, Gajanan Madhav Muktibodh, Balkrishna Sharma Naveen, Prabhakar Machwe, Subhadra Kumari Chouhan, Dushyant Kumar Tyagi, Sharad Joshi and Harishankar Parsai. If they had lived to see the event they would mourn the decay of Hindi, says Shaktidhar Deshmukh, who at 87 is proud witness to the era when Muktibodh, Naveen and Machwe were teachers at a school in pre-Independence Madhya Bharat.

Job-seekers of new generation have woken up to the growing significance of English. Most of them can't afford to compete with peers studying in public schools. No wonder then if the Hindi newspapers believe the upwardly mobile readers need copious doses of the international language. Puritans are fuming at the systematic dwarfing of the 'Rashtrabhasha' right under the avowedly nationalist government. One expected the conservatives to be protesting such adulteration in the language but found them going along with the flow.

The organisers' effort is not in line Modi's views expressed in inaugural speech. Modi underlined concerted efforts to promote and enrich Hindi and said that the language, along with English and Chinese, "will be influential in the digital world in the coming days". Modi also called for steps to be taken to preserve endangered languages as he pointed at concerns among language scholars that 90 per cent of the 6,000 languages world-over would face the risk of becoming relics from the past.

Sahitya Akadami awardee Rajesh Joshi wants a white paper to be issued on the purpose the nine Hindi conventions have served so far. His observations can't be dismissed as a disgruntled writer's whine. He is pointing to the systematic degradation of the language in the name of making it more dynamic. Paradoxes abound the progress of Hindi in the media and in the administration in Madhya Pradesh. Sample this newspaper headline about the Convention: "Bhopal mein ground working, Delhi se aaya Schedule." One of the 12 sessions scheduled in the convention is supposed to address this issue. Other issues on the agenda are promotion of Hindi abroad, problems of teaching in non-Hindi areas and application of Hindi in the foreign policy.

After the multi-million rupee Vyapam rip off the Shivraj Chouhan government decided to give the tarnished brand Vyapam a decent burial. Vyavasayik Pariksha Mandal (Vyapam) will now be known only by it English name, Professional Examination Board (PEB). The change took place while Bhopal was on an overdrive painting English names into Hindi for the Convention. The solitary concession to Hindi was by way of painting the name in Devnagari.

The state government which claims to fight for the glory of Hindi has been struggling to get suitable translators for years now. Even after watering down the selection criteria it had to outsource the job want of suitable hands. This has been attributed to the falling standards of language teaching.
Madhya Pradesh Hindi Granth Akademi which has developed textbooks for professional courses like Law, Medicine and Engineering has been lamenting the lack of attention to its effort of nearly forty years. Noted writer and former senior functionary of the Hindi Grant h Akademi says successive governments in the state have shied away from prescribing these text-books.