Notes From A Malnutrition Treatment Centre At Dungarpur In Rajasthan

More from Pallavi Patel and Dr Neeta Shah
View All

Under the National Rural Health Mission (NRHM), Nutrition Rehabilitation Centres (NRCs) have been set up at various health facilities across the country. Their purpose is to admit and manage children with Severe Acute Malnutrition (SAM). Such children fall under two categories: those with medical complications such as diarrhoea, fever, and pneumonia, needing facility-based care; those without complications, who can be managed in the community. It is estimated that around 93.4 lakh children suffer from SAM in India, out of which 10 per cent require facility-based care. Even after a child is discharged, follow-up at the community level is crucial to prevent further relapse.

At the time of commencement of the programme, the socio-cultural scenario indicated that early marriage and early pregnancy within first year of marriage was a common practice. Low education level of mothers was common, almost 50 per cent of mothers with children below age five, never attended school. Use of contraceptives, both temporary and permanent, was found to be very low, affecting the overall health of mothers and leading to low-birth-weight babies. Repeat pregnancies for want of male child, resulted in inadequate birth spacing, worsening maternal health further.

Primary data on the feeding practices of the infant and young children revealed:

•Exclusive breastfeeding was not commonly observed.

•Biscuits and toasts were the preferred feed given to the child. The most common food given to children was chappati made of wheat or maize. Some children were fed rice. Pulses, vegetables and green leafy vegetables were not fed to children. Families who ate non-vegetarian food, did not feed children the same.

•Children contracted diarrhoea as early as age one month. Cessation of breast milk and solid food during illness was a common practice. There was no care observed related to feeding the child while he or she was recovering from illness

In order to strengthen the nutrition education component of MTCs, CHETNA designed an educational intervention programme. As per MTC guideline in Rajasthan, duration of stay of child at MTC is that of 10 days. Keeping in view, the common child feeding practices followed by the community, and to inculcate positive behaviour to prevent under nutrition, CHETNA developed educational intervention of 10 days. Interactive educational materials were designed to impart important messages.

The educational intervention incorporated the use of 3D posters, with the photograph of a SAM child. With a change in the angle of the poster, the picture of the SAM child got converted to a healthy child along with messages on the prevention and treatment of undernutrition. The 3D effect had a positive effect on the emotions of the parents. They could understand that with simple do-able actions, like feeding energy-dense food, follow up visit to MTC and following hygienic practices can improve their child’s health.

Counselling cards had a series of messages related to the importance of infant and child feeding practices, importance of being at the MTC centre for 10 days, minimum three follow up visits to MTC and following instructions of post-treatment feeding of child.

These messages were converted in an interactive learning form to ensure effective delivery and revision of messages. They were in the form of jigsaw puzzles and snakes and ladder game. Three sets of jigsaw puzzles, simple to complex, were developed. These interactive sessions created interest among parents. They also took initiative in learning from each other. They were also taught how to wash hands and how to use nail cutter to cut nails. Apart from this, daily one recipe of energy dense food was demonstrated made from locally available food items.\ 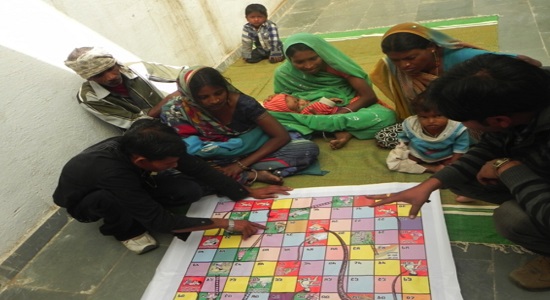 CHETNA team facilitated training sessions to the para medical team of MTC by organising one-hour counselling session daily with mothers at MTC during their ten days stay at MTC. They were provided mentoring support to counsel parents, for a period of two months. During this period, four rounds of educational and counselling sessions were completed.

To ensure follow-up visits by mothers after the child is discharged from MTC, a discharge kit was developed. The kit included recipes of energy dense complementary feeds, messages related to early initiation of breast feeding, colustrum feeding, exclusive breastfeeding, initiation of complementary feeding and personal hygiene. The dates of three follow-up visit schedule at MTC were highlighted in the discharge card. In addition, the kit had items like soap, nail cutter, measuring spoon, bowl, plate to encourage mother to continue maintain personal hygiene at the household level.

The family of 21 children, who were discharged from MTC during August to December 2013, were provided follow up support at the household level for two months. During this period their mothers and family members were motivated to continue feeding the child with energy dense food recipe demonstrated at the MTC and ensure three follow up visit to MTC.

Punji was just 17-years-old when she gave birth to a baby girl, within a year of her marriage. She had an institutional delivery at the Community Health Centre. She gave birth to a a low birth weight baby. She did not breastfeed her baby immediately after birth. Instead she fed prelacteals – cow’s/goat’s milk as is the tradition in her village. Unaware of the importance of
complementary feeding and the right age to start, Punji continued breastfeeding her baby and did not feed complimentary food even after six months. With no colostrums feeding and complementary food intake, the baby suffered from frequent episodes of diarrhoea and vomiting. She was too weak to even crawl. Concerned about her child’s health, Punji consulted the doctor.

The child was admitted to the paediatric ward of the government hospital at Dungarpur and later referred to the MTC for 14 days. At that time, the child was 10 months old. During her stay at MTC, Punji attended regular counselling sessions conducted by paramedical staff trained by CHETNA. She learnt about benefits breastfeeding and complimentary feeding would have on her child’s health.She remembered the health and nutrition messages and like every concerned mother, she was determined to improve her child’s health. Thanks to the counseling she received and the recipe demonstration of energy dense food at the MTC. After getting discharged from MTC, Punji breastfed her child at regular intervals and also fed her baby energy dense food. Within four months of post treatment care at home, the child gained weight and her condition was stable. Punji’s joy knew no bounds

Scaling up the effort

A total of 27 Master Trainers were trained to continue the training of para-medical staff to initiate counselling 45 MTCs in Rajasthan. These master trainers were Associate Professors of Government Hospitals and Medical College, faculties of Home Science College, and trainers from the State Institute of Health and Family Welfare and State Resource Persons from MTC. The material designed and the discharge kit developed were replicated and disseminated among all the 45 MTCs of Rajasthan.

Following recommendations are noteworthy for consideration and replication in Malnutrition Treatment Centres (MTCs) under the National Rural Health Mission.

1.During the stay at MTC, building capacities of parents of SAM children on breastfeeding and complementary feeding practices, personal hygiene, importance of feeding energy dense food is non-negotiable.

2.Both prevention and treatment of a SAM child is important and therefore working at both at community and MTC levels, is extremely important. There is a need to strengthen linkages between facility based management (MTCs), Anganwadi Centres or Day Care Centres under Integrated Child Development Scheme (ICDS) and Community Based Management for prevention, treatment and continuum of care of SAM children after they discharged from MTC.

3.Documentation of SAM children at the entry level and exit level from MTC and of follow-up to track the nutritional status at all levels for necessary action.

4.Building capacities of the para medical staff at the facility and the frontline workers at the community level particularly the Accredited Social Health Activist (ASHA) and Anganwadi Workers (AWWs) on communication and counselling on infant and young child feeding is important. At the facility level, the para-medical staff can provide treatment, counselling and care. At the community level, the AWWs and the ASHAs can support in early identification and referral of SAM children through the Village Health and Nutrition Day (VHND) platform and also provide after care support to mothers once their children are discharged from MTC.

5.Develop a follow-up mechanism to specifically address the status of follow-up of discharged children through meetings at the sector level and block level.

Pallavi Patel is a Director and Founding Member of CHETNA. A trained nutritionist, she has worked in this field for more than 35 years.

Dr Neeta Shah, formally trained as a BHMS (Bachelor of Homeopathic Medicine and Surgery) has experience of more than 20 years in the area of community health