General V.P. Malik, then Chief of Army Staff, argues that from the professional point of view there is no chance of the possibility of a nuclear conflict 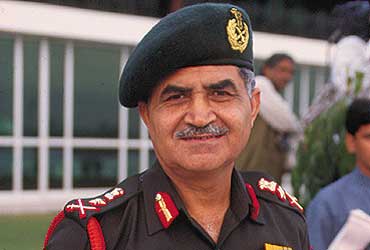 outlookindia.com
-0001-11-30T00:00:00+0553
Original Interview: August 1998
Please click here for exclusive excerpts  from Countdown. For more writings by and on Amitav Ghosh, please visit his website, amitavghosh.com, where this first appeared

AG: What was exactly the military logic behind the testing at this time. Were there any pressing security reasons ?

VPM: Nuclear weapons are not military weapons. So the first thing I’d like you to notice is that these are political weapons and they must be viewed as such, they are today weapons to deter the others from using this weapon—those who have it. So firstly it is not a military weapon so far as we are concerned. Secondly it is a weapon to deter others so that we do not become a victim. It is to prevent or safeguard, to ensure that no one who has it should use it on us.

AG: There has been a lot of talk recently about the command and control system and whether there are in place at the moment.......you think you can comment on it?

VPM: Well, it's being discussed. All I can tell you is that whatever command and control that can be put, the whole thing would be put totally under the control of a political authority.

AG: So it will essentially be under civilian control.

AG: So in effect you're saying that army will have no control over those—so are you thinking of some kind of a separate strategic force just for nuclear weapons—as there was in Russia and the USA?

VPM: Lot of people go back to those days of the Cold War—but there are a few things on which our policies have been very clearly mentioned. For instance, it's a deterrent, that we believe in no first use, so it's not the same environment in which the USA or the erstwhile Soviet Union looked at each other during the Cold War—We will have minimum deterrence and the ultimate authority shall lie with civilian authorities. At the lower level if and when the advice is sought, naturally it's only there where the military will come—I wouldn’t like to comment on that now.

AG: If some day we do have nuclear weapons, we will require procedures that would require marrying of nuclear pits to delivery systems. Would that be under civilian control as well ?

VPM: Well, we are working on all those things where civilians, military, scientists all will be involved.

AG: Talking about deterrence would you identify China as one of India’s principal threats?

VPM: I don’t like to identify any country as such—When we are talking, we are talking about the strategic environment as it prevails in the whole world and in the region.

AG: What about tactical weapons—

VPM: I don’t think we are thinking on those lines—the scientists, the technologists say they have the capability, but when we are talking about minimum deterrence, you’ll agree with me—we are not thinking about large numbers.

AG: As for as control of nuclear weapons are concerned you say that the army will be conceding a large part of its authority to civilian authorities. Is this something that the army welcomes?

VPM: There has never been any dispute on that aspect. We are a democratic country, the army is an instrument for the services. And we are quite happy in going control to civilian authorities—I don’t think the question of ‘giving away' arises at all. And it changes nothing.

AG: I only meant that in a management sense—

AG: So do you feel that at this point there is the an increasing threat perception—an increased sense of security threat inside India that led to these tests?

VPM: No there is no immediate threat. This has been debated over a long time. To go back to history, the country in our neighbourhood tested its first weapon in 1964. Thereafter they have carried out 45-46 tests. We are talking of regional environment, then, there is another country although they had not tested overtly, there were very credible statements made by their Prime Minister, ex-PMs and chiefs and ex-chiefs saying that 'we have it’, I can quote those statements—starting from ’90, ’92, ’94.

Not only in their own country, but even when they have gone abroad they have made those statements. Then there has been the pressure that we shall have people who have it and we shall have others who will not have it. So there [are] a lot of these factors that came into play and the decision was taken—but if you're asking whether there was any military threat, immediately, no.

Our threat today primarily is in terms of terrorism, militancy, a proxy war as we call it—sponsored by a neighbour—which has got nothing to do with the nuclear tests—

AG: You must be aware that there is a thinking among military theorists, that the moment a nation acquires nuclear weapons, it only increases its vulnerability -- after these explosions there have been a lot more skirmishes along the border. You think there is any connection?

VPM: No, I don’t think there is any connection whatsoever. Although we heard these voices in our neighbourhood that 'we have it', now of course they say we heightened it. Now it's just not that, as I said, -- please do not connect nuclear weapons with this militancy or terrorism.

In the last few years the intensity of proxy war has gone up. It has been going up for quite some time, if so many massacres are taking place now—that has got nothing to do with nuclear weapons. Because they think J&K is their problem and because they want to internationalise that problem and put more and more pressure on us.

I don’t think any sane military man would look at nuclear weapons for a thing like this. I haven’t seen any such statement from any professional on either side of the border. Some other people might have made it, but no military professional has connected these two issues.

VPM: Well, it's not easy—because lately the number of low-intensity conflicts that are happening in the world are much more, especially after the Cold War has ended and there must be around 35 or 36 places where such conflicts are going on ...

But it is not easy—so far as terrorists are concerned, they have no accountability, they can win or they can lose. As far as armies are concerned, they are accountable for a lot of things, including human rights also, since they are the last instrument of the nation, they have to win, they cannot afford to lose, so there is a pressure on the armies.

But let me also say that the Indian army hasn’t done too badly—we had a problem in Punjab which we managed to overcome, along with the LIC [Low Intensity Conflict] of the nature that is going on, you have to take the help of the concerned administration and the support of state governments. We managed to overcome that after nearly 8-9 years.

And similarly we have been able to overcome insurgencies per se. But the peculiar situation in J& K is that it is very heavily sponsored from outside. So it might take time, but I’m an optimist. In a way we’ve gained quite a lot because elections were held -- first the state assembly and thereafter the Parliamentary electrons and in J&K today you have an elected CM, elected representative in the Lok Sabha and in the whole of the state it is the writ of the civil authority which runs—barring these incidents created by the militants and the situation, even as far as tourism is concerned, in the state, this year, I believe we have had the largest number of tourists in many years.

So today the situation there is that the locals are less interested in carrying on with those who were brainwashed.

AG: What sort of strategy can help to prevent the many wars that are going on in Central Asia—Tajikistan and Afghanistan from spilling over?

VPM: It's true that the soldier’s job has become more difficult given the whole spectrum from LICs, right up to nuclear threats. And in between comes conventional war and instability around your country is always a cause of concern. And today what is happening in Afghanistan is not merely a concern for India, but for many neighbouring countries too. So we have to take those into account in our future strategies.

AG: These nuclear weapons could lead to force reductions?

VPM: Yes, it could happen because when the threshold comes down, naturally, then the requirement of forces will come down.

AG: There has been said that these nuclear weapons have really decreased India’s security by reducing the enormous conventional advantage that we had once over Pakistan for example...

VPM: I don’t think so. On the other hand, I believe that now, things are more transparent and transparency should introduce greater stability.

Transparent in the sense that earlier we knew that people had something in the closet—now everything is out, is visible.

As far as our advantage in conventional weapons is concerned, I think that stays because, in the higher level, things have now equalized—so whatever advantage we have is still there, but the threshold, we are also conscious, will come down.

AG: So is there a possibility that a conflict willy-nilly will escalate into nuclear conflict?

VPM: No, I don’t foresee that ...But I can say that we will not be threatening each other with these bombs. No professional will.

AG: But how can you be sure of that?

VPM: Nobody can be sure of that—Unless all countries do away with these weapons.

AG: Do you think the Siachen question can be resolved in some way?

VPM: Everything can be resolved if you start talking to each other. If you refuse to talk, if you have only a one-point agenda and refuse to listens to others’ point of view it cannot be resolved. We have a task in hand and we shall do it.

AG: So you feel that there is no absolute possibility of an accidental escalation into nuclear war?

AG: But as you said they are not in hands of professionals always...

VPM: Yes, professionals are also instruments of the political authorities.

'Explosion Of Self Esteem'