What one saw on March 16 was only the end of Act I of the political drama in Pakistan. Act II could start over the issue of the abolition of the special powers of the President. Pakistan is in for a spell of weak and manipulative leadership 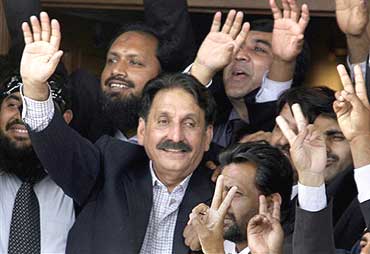 In an apparent last-minute, late-night climb-down, President Asif Ali Zardari of Pakistan agreed on March 16, 2009, to reinstate as the Chief Justice of the Pakistan Supreme Court Iftikhar Muhammed Chaudhury who was twice removed from office by the then President Pervez Musharraf in March and November, 2007. His reinstatement will take effect after the present Pervez Musharraf-appointed Chief Justice Abdul Hameed Dogar reaches the age of superannuation on March 21, 2009.

There were earlier reports that Zardari was contemplating to give Dogar an extension. The unprecedented support for Iftikhar Muhammed Chaudhury not only from the community of lawyers, but also from large sections of the people mobilized by the Pakistan Muslim League (Nawaz), has forced him to accept the demand for his reinstatement. Pressure from the Army and the US to avoid a violent street confrontation on the issue has also forced his climb-down.

The events leading to this climb-down would strengthen the misgivings not only in Pakistan, but also in the US about Zardari’s leadership qualities. He brought this humiliation upon himself by his ill-advised attempts to undermine the political position of Nawaz, his brother Shahbaz Sharif and their PML (N) in Punjab. For this purpose, he allegedly manipulated a ruling by a bench of the Supreme Court consisting of judges appointed by Musharraf disqualifying Nawaz and Shahbaz from holding any elected office. The bench gave the ruling on the ground that Nawaz was a convict in a case filed against him by Musharraf after seizing power in October,1999, and that Shahbaz was a co-accused in a case relating to the death of a person at the hands of the police when he was the Chief Minister of Punjab before the 1999 coup.

Allegedly acting on the wrong advice of his cronies, Zardari tried to take advantage of the ruling to have the PML (N) removed from power in Punjab and to have an engineered coalition consisting of his Pakistan People’s Party (PPP) and the PML (Qaid-e Azam) created by Musharraf in 2002 to defeat the PPP and the PML (N) inducted into power. His attempts, made through Salman Taseer, the Governor of Punjab, who is a crony of Zardari as well as Musharraf, boomeranged.

The fresh agitation by the lawyers for the reinstatement of Chaudhury, the date for which had been announced by them long before the events in Punjab, might not have assumed the dimensions of a people’s revolt against Zardari but for his failed attempt to capture power for his party in the Punjab through engineered defections from the ranks of the PML (N) and back-room manipulations with the complicity of some sections of the Musharraf-appointed judiciary.

The last elections to the National Assembly held in February, 2008, two months after the assassination of Benazir Bhutto, surprisingly showed that the sympathy wave for her was confined to the rural constituencies of Sindh. The PPP failed to do well even in its traditional support bases in southern Punjab, largely inhabited by the Seraikis. The sympathy wave in Punjab was more for Nawaz because of the way he was sought to be humiliated by Musharraf after the coup. The PML (N) won many more seats in Punjab than the PPP. Even the Rawalpindi area, where Benazir was assassinated, voted for the PML (N).

The resulting polarization between Sindh, dominated by Altaf Hussain’s Muttahida Qaumi Movement (MQM) and the PPP, and Punjab dominated by the PML (N), set in motion the train of events which ultimately led to the humiliation of Zardari. The action of Zardari in going back on his pre-election commitments made to the PML (N) in matters relating to the reinstatement of the sacked Chief Justice and abolishing, through a constitutional amendment, the powers of the President to dismiss an elected Prime Minister and dissolve the National Assembly exacerbated his personal differences with Nawaz.

The old Bhutto loyalists in the PPP, including Yousef Raza Gilani, the Prime Minister, who is a Seraiki, were uncomfortable about the erratic decisions of Zardari on the advice of a small coterie of persons such as Rehman Malik, the Adviser for Internal Security, Salman Taseer and Farook H.Naek, his former lawyer in the corruption cases, whom Zardari made the Minister for Law and then had him elected as the Chairman of the Senate, the upper House of Parliament. The Bhutto loyalists were shocked by his action in choosing Naek for election as the Senate Chairman, overlooking the claims of Raza Rabbani, an old Bhutto loyalist, who was held in great respect in the party. Rabbani resigned in protest from his post of Minister For Inter-Provincial Co-ordination.

The people’s uprising on the issue of the reinstatement of the sacked Chief Justice and the growing discontent in his own party over the way he sought to marginalize old Bhutto loyalists created a situation, where he found himself isolated. The erosion of whatever little support he had in his party and in the country as a whole and the growing unease in the Army and the US over the implications of his policies and actions for the stability of Pakistan and the fight against terrorism created a situation where his humiliating climb-down became inevitable.

Unfortunately, Zardari is not known to be a man who learns from his mistakes. He tends to repeat them. Comments by persons close to him show that he and his cronies look upon the concessions made by him not as a climb-down, but as a tactical retreat to avoid a street confrontation, which might have triggered off an intervention by the Army. While he may have no other option but to restore the PML (N) to power in Punjab, he is likely to resist the demand of the PML (N) and others for a constitutional amendment to abolish his powers to dismiss the Prime Minister and dissolve the National Assembly. As he did in the past, he would create an impression as if he is keen to abolish these powers, but is prevented from doing so by the lack of two-thirds support for a constitutional amendment in the National Assembly. What one saw on March 16 was only the end of Act I of the political drama in Pakistan. Act II could start over the issue of the abolition of the special powers of the President.

Pakistan is in for a spell of weak and manipulative leadership by a leader without much public support, but trying to survive through political manipulations. This will aggravate the already serious security vacuum in the country and give fresh oxygen to the various terrorist groups operating from the Pakistani territory. At a time when the Barack Obama administration is embarked on formulating a new strategy to end the political and security vacuum in Afghanistan, it is faced with the danger of a similar vacuum in Pakistan.

If Pakistani public opinion has to have a say as to who should be its ruler, its choice will be on Nawaz Sharif. After having seen the huge mess created by Zardari within six months of taking over as the President, the Army too would prefer Nawaz Sharif despite his attempts in October, 1999 to humiliate Pervez Musharraf, his Chief of the Army Staff, by dismissing him while he was abroad and unsuccessfully trying to prevent his return.

US thinking will have a say in influencing the Army’s position. Zardari has given the US a free hand in the tribal belt to attack terrorist hide-outs with its fleet of Predator aircraft. Zardari is amenable to US advice on the fight against terrorism. There have even been reports that he and Gen.Ashfaq Pervez Kiyani, his Chief of the Army Staff, have allowed the Central Intelligence Agency, to use bases of the Pakistan Air Force for launching the Predator strikes.

It is very likely that if Nawaz Sharif comes to power, he may not be as amenable to US requirements as Zardari has been. On more than one occasion, Nawaz Sharif has expressed the view that the present terms of the co-operation with the US need to be reconsidered without weakening the over-all fight against Al Qaeda. Zardari owes a huge debt to the US for persuading Musharraf to issue the National Reconciliation Ordinance (NRO) under which the pending cases against him and his wife were withdrawn.

Nawaz Sharif, on the other hand, owes no such debt to the US. He is likely to be more independent and less accommodating with the US. Would the US continue to facilitate the continuance of Zardari in power because he is willing to do its bidding or will it remove itself from the way of Nawaz Sharif coming to power, realizing that a stronger and more popular ruler would help US interests strategically than a weak and unpopular ruler who could prove to be detrimental to US interests tactically as well as strategically?

On the answers to this question would depend what happens under Act II of the Pakistani drama. A dark horse will be Prime Minister Gilani, who has emerged with an enhanced image from the present crisis by virtue of his having distanced himself from the decisions of Zardari relating to Punjab. If Gilani has to be built up into a more assertive ruler, the special powers of the President have to be abolished. This can be done only if the PML (N) and the Bhutto loyalists in the PPP join hands. The prospects of this happening are rather low now.

Pakistani co-operation with India in the investigation of the 26/11 terrorist strikes in Mumbai and in acting against the anti-India terrorist infrastructure in Pakistani territory will be even more uncertain than it has been hitherto. More terrorism against India by groups taking advantage of the huge mess and political and security vacuum in Pakistan is a distinct danger.

The Rape of Washington