The cartoon, put up to protest for fair and free polls in state, depicted democracy being hurt in Telangana and drawing an analogy with Draupadi's "vastraharan" in the Mahabharata. 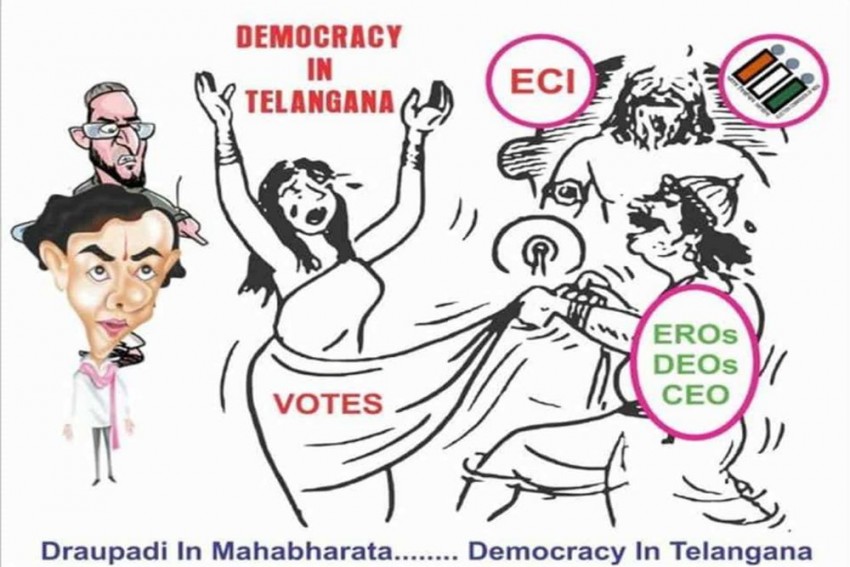 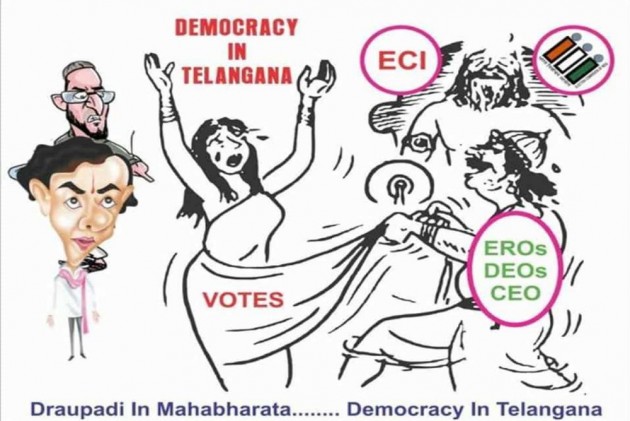 Taking exception to a cartoon made by the Congress featuring him, AIMIM president Asaduddin Owaisi on Thursday asked how would the Congress leaders in Telangana feel if a cartoon with the party's top leaders was made.

"...And you have put the pictures of me and KCR, the chief minister (of Telangana). I would like to ask the Congress people, if a cartoon of Sonia Gandhi, Priyanka Gandhi and Rahul Gandhi was made, how would they feel?.... I will not do so. I respect (UPA chairperson) Sonia Gandhi a lot," he told reporters in Hyderabad.

The Lok Sabha MP from Hyderabad said the Congress leaders in Telangana, who were handed out a humiliating defeat in the recent Assembly polls, should remain within the ambit of manners and respect.

The Congress held a protest in Hyderabad on Thursday against the alleged failures of the Election Commission to ensure a free-and-fair poll in the state. During the stir, a cartoon was put up, depicting democracy being hurt in Telangana and drawing an analogy with Draupadi's "vastraharan" in the Mahabharata.

Asked about the "chowkidar chor hai" (the watchman is the thief) slogan against the BJP, Owaisi said all the "watchmen" were responsible for problems like illiteracy, unemployment and backwardness of Muslims in the country.

"Had they done justice, India would not have been in this state. What we see is malnutrition, a stunted growth in children.... Which 'chowkidar' is responsible (for the same)?," he asked.