The tragedy of September 11 provides us with an opportunity to stop all forms of terrorism -- militaristic, technological, economic, political... 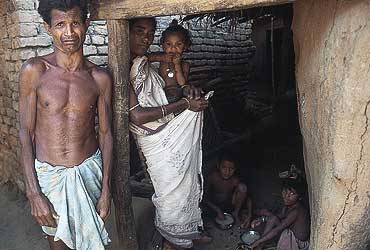 18th September was the day for solidarity with victims of the September 11th terrorist attack on the U.S.

I joined the millions to observe two minutes silence at 10:30 a.m. for those who lost their lives in the assault on the World Trade Centre and the Pentagon.

But I also thought of the millions who are victims of other terrorist actions and other forms of violence. And I renewed my commitment to resist violence in all its forms.

At 10:30 a.m. on 18th September, I was with Laxmi, Raibari, Suranam in Jhodia Sahi village in Kashipur district in Orissa. Laxmi's husband Ghabi Jhodia was among the 20 tribals who have recently died of starvation.

The deliberate denial of food to the hungry is at the core of the World Bank Structural Adjustment programmes. Dismantling the Public Distribution System (PDS) was a World Bank conditionality. It was justified on grounds of reducing expenditure. But the food subsidy budget has exploded from Rs. 2,800 crore in 1991 to Rs. 14,000 crore in 2001. More money is being spent to store grain because the Bank required that food subsidies be withdrawn. This led to increase in food prices, lowering of purchase from PDS and hence build up of stocks. The food security of the nation is collapsing.

While observing 2 minutes silence in the midst of tribal families who are victims of starvation even while 60 million tonnes are rotting in the godowns, I could not help but think of economic policies which push people into poverty and starvation as a form of terrorism.

Starvation deaths in Maharashtra, Rajasthan, Orissa are a symptom of the breakdown of our food systems. Kashipur was gifted with abundance of nature. Starvation does not belong here. It is the result of waves of violence against nature and the tribal communities. It is a result of a brutal state ever present to snatch the resources of the tribals for industry and private corporations, but totally absent in providing welfare and security to the dispossessed tribals.

The starvation deaths in Kashipur and other regions are a result of the ecological plunder of the resources of the region, the dismantling of the food, security system under economic reform policies and the impact of climate change which caused two years of crop failure due to drought and this year's crop failure due to excessive and unseasonal rain.

Twenty years ago, the pulp and paper industry raped the forests of Kashipur. Today the herbs stand naked, and the paper mills are bringing Eucalyptus from neighbouring Andhra Pradesh.

The terrorism of the pulp industry has already left the region devastated. Now the giant mining companies - Hydro of Norway, Alcan of Canada, Indico, Balco/Sterlite of India have unleashed a new wave terror. They are eyeing the bauxite in the majestic hills of Kashipur. Bauxite is used for aluminium - aluminium that will go to make Coca Cola cans and fighter planes.

Imagine each mountain to be a World Trade Centre built by nature over millennia. Think of how many tragedies bigger than what the world experienced on Sep 11th are taking place to provide raw material for insatiable industry and markets. We stopped the ecological terrorism of the mining industry in my home - the Doon Valley - in 1983. The Supreme Court closed the mines, and ruled that commerce that threatens life must be stopped. But our ecological victories of the 1980s were undone with the environmental deregulation accompanying globalisation policies.

Mining has been "liberalised" and corporations are rushing to find minerals wherever they can. The Aluminium companies want the homelands of the Kashipur tribals.

But triabls of Kashipur refuse to leave their homes. They are defending the land and earth - through a non-violent resistance movement -- the movement for the Protection of Nature and People". As Mukta Jhodia, an elderly woman leader of the movement said at a rally on 18th in Kashipur,

The earth is our mother. We are born of her. We are her children. The mining companies cannot force us to leave our land. This land was given to us by God and creation, not by the government. The government has no right to snatch our land from us.

This forced apportion of resources from people too is a form of terrorism - corporate terrorism.

I had gone to offer solidarity to victims of this corporate terrorism which was not only threatening to rob 200 villages of their survival base but had already robbed off their lives when they were shot and killed on 16th December 2000 by the police.

Abhilash was one of the victims killed in the police firing. His wife Subarna Jhodia was expecting a baby when he was shot. When I went to meet her in her village Maikanch, she was sitting on the doorstep of her hut with the baby girl who was born after the father was brutally killed. I asked her what she had named her child, she asked me to give her daughter a name. I named her Shakti - to embody power in peaceful form - to carry in her the `Shakti' her father and his tribal colleagues have displayed over a decade of resistance against the terrorism of mining companies and a police state and one combined shakti to fight all forms of terrorism.

50 million triabls who have been flooded out of their homes by dams over the past 4 decades were also victims of terrorism - they have faced the terror of technology and destructive development.

For the 30,000 thousand people who died in the Orissa Supercyclone, and the millions who will die when flood and drought and cyclones become more severe because of climate change and fossil fuel pollution, President Bush is an ecological terrorist because he refuses to sign the Kyoto protocol.

And the WTO was named the World Terrirost Organisation by citizens in Seattle because its rules are denying millions the right to life and livelihood.

The tragedy of September 11 provides us with an opportunity to stop all forms of terrorism -- militaristic, technological, economic, political. Terrorism will not be stopped by militarised minds which create insecurity and fear and hence breed terrorism. The present "war against terrorism" will create a vicious cycle of violence. It will not create peace and security. We are already witnessing a xenophobic wave sweeping across the U.S., with Indians, Asians and Arabs being attacked and killed. We are seeing fundamentalists of every hue emboldened by the mood for `revenge'.

Terrorism can only be stopped by cultures of peace, democracy, and people's security. It is wrong to define the post September 11th world as a war between "civilisation and barbarianism" or "democracy and terrorism". It is a war between two forms of terrorism which are mirror images of each other's mindsets - mindsets based on this that can only conceive of monocultures and must erase diversity, the very pre-condition for peace. They share the dominant culture of violence. They used the same weapons and the same technologies. In terms of the preference for violence and use of terror, both sides are clones of each other. And their victims are innocent people everywhere.

The tribals in Jhodia Sahi had lit a lamp for me at the village shrine - a small stone. These tribal shrines are insignificant when one measures them in physical terms against the twin towers of the World Trade Centre. But they are spiritually deeply significant because they embody a generous cosmology of peace - peace with the earth, peace between people, peace within people. This is the culture of peace we need to reclaim, and spread.

As we remember the victims of Black Tuesday, let us also strengthen our solidarity with the millions of invisible victims of other forms of terrorism and violence which are threatening the very possibility of our future on this planet. We can turn this tragic brutal historical moment into building cultures of peace.

The Embers Continue To Simmer