The nation and its universities have moved farther apart from one another than ever before. In a developing country with an exploding youth population, there are few stories that are more tragic. 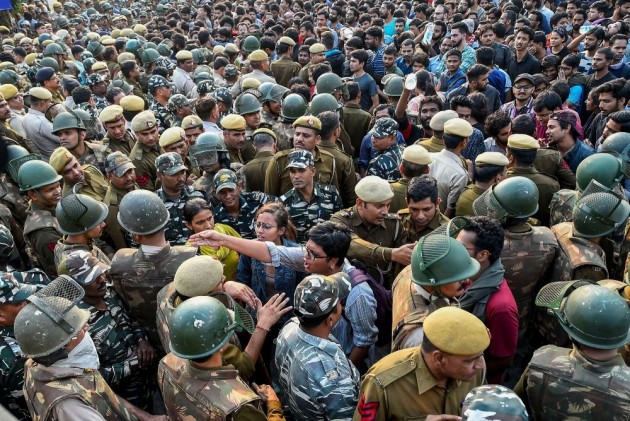 If you look up any recent news entry or Op-Ed article on the proposed JNU fee hike and the protests against it and scroll down to the “Comments” section, this is what you’ll see:

“First change the name to Sardar Patel university. Second get rid of these pro Kashmir leftists. The university will become fine after that.” (NDTV)

But a “kind” of a pulse is tangible in the “Comments” section following articles, news and opinion alike. The situation is a bit like when the amateur sleuth Byomkesh Bakshi tells his friend Ajit: “Who cares about the news in newspapers? They are just fillers. The real news is in the advertisements. Ads are the only things I read.”

Like Byomkesh, many of us now head straight to the “Comments” sections of articles on sensitive subjects, right after browsing the headline. A bizarre kind of action unfolds there.

Surely this “pulse” includes those of paid trolls, bots or semi-bots or whatever AI machine-army hack and heckle up on the internet. But clearly not all of it can be dismissed.

This is the unavoidable and undeniable truth: Institutes of higher education in India, for decades nourished by a scaffolding of Nehruvian socialism, have, in the last decade or so, radically gone out of sync with the beliefs, desires and aspiration of the bulk of the nation, or at any rate, of its vocal middle-class.

As I write this, the top trending hashtag on this issue on Twitter is #ShutDownJNU. Sample:

Sure, there are voices on the other side too, just as angry. A favourite: “Yes, #ShutDownJNU and open WhatsApp university…Then Fill the country with thousands of cow, sanghi, gutka khors…”

But in the grand scale, the voices on the other side make up an enfeebled minority, cloistered in certain circles. Much like the protesting JNU students behind walls of tear gas and water-canons, contained within walls with hatred frothing outside.

The Nehruvian socialist vision which shaped the landscape of higher education in post-independence India – the same vision which gave births to the IITs – reached a high goal in the establishment of JNU in 1969.

India’s newest Nobel Laureate, Abhijit Banerjee, tells a revealing story when he says that he had to arrive at JNU to experience class and caste diversity on a scale he had never known before, not in the Presidency College he left behind, far too deeply straddled with the old boys network from the Bengali upper castes.

Having spent 17 years in American universities, several as student and some as teacher, I’ve long shared the common belief that US universities are islands, oasis of excellence cut off from the ocean of reality around – that of a stunningly anti-intellectual nation. In the same breath, I would say that whatever be wrong with Indian universities, howsoever lacking the culture of research and innovative pedagogy, Indian universities, most of them public, are situated closer to the common mind and soul in India. Many of them are in the heart of great cities, unlike the pastoral suburban culture that nourish the greatest American colleges and universities.

It could not, and it did not last long in America. The great culture of immediate instrumentality and consumer satisfaction that defines the Great Mall of America is now on the way to quickly swallow the protected space of the intellect that American universities once used to be. To the point where not only the humanities, but the liberal arts on the whole, are on a fast track to extinction in that country.

In India, just the opposite seems to have happened. Once closer to the common citizen’s consciousness, the great public universities have moved farther and farther out of sync with the pulse of an increasingly intolerant and jingoistic nation.

“JNU-type” has become a lexical category. A dismissive category would be putting it mildly; viciously noxious in the category of “Urban Naxal.” I know of several academics who refuse to place their university’s parking sticker on their car, for the fear of the car being vandalised. They are not JNU professors.

“JNU type” is a category that sticks easily to academics in India these days no matter where you teach. These battles in India have long since moved past the simplistic binary of the Left vs Right. Now it’s more like Left vs Everyone Else.

How and when did the university and the nation move so far apart from each other?

Perhaps the answer lies in Shiv Viswanathan’s recent analysis of the phenomenon of Arnab Goswami: “He is the metaphor of the time, because he enacts the majoritarian Indian every day.”

There was a time when the Indian public university was closer to the majoritarian Indian. It was never quite there, of course – universities are always rarefied spaces and hence there is always a distance from the streets. Today, they are oceans apart.

In a developing country with an exploding youth population, there are few stories that are more tragic.

(The writer is a Professor of English & Creative Writing at Ashoka University. He is the author of several books, most recently, the novel The Scent of God (2019). He tweets at @_saikatmajumdar. Views expressed are personal )