Home  »  Website  »  National  » Opinion  »  Olive Green Words: An Open Letter To All Who Care For The Blood Of The Soldiers
Opinion

Our Defence budget has sunk to an abysmally low 1.2 of the GDP. A war cannot be fought and won by bravery alone. It will not be a battle of fisticuffs like Galwan. It will be a highly technical war, supported by thousands of troops on both sides. 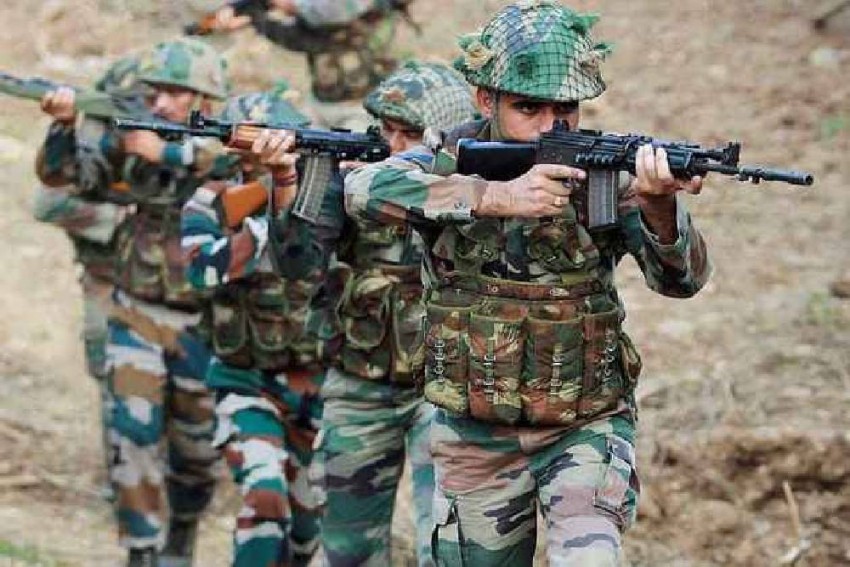 I controlled myself. I really controlled myself from telling you that I am the voice that looks out, like family, of every soldier, sailor and airman, guarding that line between peaceable sanity and exploding madness, that red line that exhorts our patriotic soldiers to stand firm and protect all that means “NAM, NAMAK AND NISHAN”, the boundaries and sovereign integrity of our nation. I am not a journalist, sworn to unbiased reporting. As Indians, we all are biased towards our soldiers and our nation.

I am of YOU, all of you who read this. Like you all, who see the unending coffins arriving home to their loved ones, we all watch helplessly, albeit needlessly. We all have seen the coffin of Major Neeraj Sharma, and seen his mother lie down over the coffin, hug it and cry tears of blood, as if that will bring her son back. We all cried along with her.

Every day, we read reports on troop build-up in Eastern Ladakh. National Highways have been closed to civilian traffic to permit smooth flow of nonstop convoys of Army trucks moving with Personnel and Weaponry. There was a fearful reportage about our Artillery, Armour and Infantry staring down, eyeball to eyeball, against the PLA, in Ladakh. 58 winters have come and gone since 1962, and the thought of gallant soldiers lying freezing on the desolation of Ladakh and Arunachal, is not a pretty memory. The last thing we need is a blood bath.

The Himalayas were impregnable. These great mountains were insurmountable, uncross able, or so we, along with Pandit Nehru, General Kaul and the rest of the coterie, thought. Unsuspecting, unprepared, Men, with Yaks and mules, were launched forth to scale the frozen frontiers, in 1962. Brave men, upright, uncompromising men, who were soldiers first and foremost. They did not seem to be family men, with living breathing mothers, wives and small children. These men built bunkers, hauled machinery and mortars, with bare hands and their tired shoulders. They put up a gallant fight despite being out-numbered and out-gunned till the last bullet and last drop of their blood.

Initially, in Eastern Ladakh and the North East, we saw an innocuous push here and a little nudge there and enemies crept stealthily into our land. Strangers moved into Barahoti and in Eastern Ladakh, where even the most learned of men had little idea of the lay of the land, leave alone negotiating the area and learning to live there. I know of troops, officers, who lived there, in a forward areas in just dug outs, wall papered by black army issue blankets and 2 similar blankets that served as doors to keep the warmth of bukharis in. Who had heard of Daulat Beg Oldi, Chushul or even Rezangla? Had anyone heard of Fingers in mountains, referred to as places of disputes. I doubt. But, they are a distinct picture. Even at that point, looking into the mirror of time, the polity of those days read the tea leaves in a cup of arrogance. They felt China would never go in for a misadventure and cross the line. But cross, the Chinese did, and then the sky fell in and it rained tears of blood and sweat and thousands of lives, became dark with clouds that would not lift, for a long time.

These days we regularly see our brave troops having a close encounter with the troops from across the border. It is pathetic to see our boys slip and fall into the freezing Galwan, yet bravely get up again and get into fisticuffs. One can see the Red flag of the PLA being torn but that is not a solution for anyone. It could be symbolic but when push comes to shove it will mean bodies and blood, colouring that very Galwan river.

And then, like in 1962, now, the attention was on Ladakh but the major attacks came from the East. They came from Khenzemane, Kibithu and the unforgettable Namak Chu. India had only a few years ago gained independence. Victory and invincibility were keywords. But a new lexicon was formed- DEFEAT. Thousands of bravest of the braves were mowed down. Thousands of lives snuffed out. China is baring its fangs through Nepal or Eastern Bhutan. Out of focus at present, is Tawang now. But it looks like the Chinese may just sneak down from the Eastern flank of Bhutan We could be shocked yet again by fearsome and more hi-tech aggression from the East. China will transgress, and without warning. There will be tremendous casualties. China is worried about reprisal from its people. Along with Taiwan, Nepalese too are on the streets, demonstrating against Chinese dominance and constructions on their land. Mike Pompeo posted that the Chinese take “incredibly aggressive action”. Our neighbours’ actions are more in concert and by design, than default. It is a frightening scenario for anyone who knows what war, or even impending war means.

Yes, we are slightly better prepared militarily, and perhaps better prepared politically, and especially in the international fora. We see some sophisticated clothing for our boys in those inhospitable areas. We see better Helicopters, new Aircrafts, better Guns, Tanks, and other war-like equipment. But, we are still horribly under prepared. We lack infrastructure. We are threatened by China’s aggressive stance on the road to DBO. The BRO works night and day. But yet, we are way, way behind in our preparation, for a full blown war. I shudder at the replay of 1962. God forbid, a two front war on the western and eastern front, will gravely tax the nation.

Much of what our boys fight with, is their willpower to not taste defeat for the ‘izzat’ of their unit, their nation and then their families, in that order. Those are our boys. That little boy who has hardly grown a beard has taken an oath even at the cost of his life to protect you, me and us all, and keep our land safe. He could be your son who has just got out of school. Would one not bring pressure upon the powers that be, no matter what the nationality, to work out amicable solutions. It is all very well to sing in unison “ ae meri Zamin, ae mere watan. Maine tere liye kayi dard sahe”…but as that young boy stops breathing with one well aimed bullet, a whole family is flung into permanent darkness and doom. These families depended on that little boy to buy them their daily bread, in some far flung village of UP or Bihar. If they stand steadfast in defending our land, must they not have enough wherewithal to fight with? It our duty as citizens of this great country to impress upon the polity to equip these men with the wherewithal to do what they are required to do and ensure our victory.

We are pretty close to a polarizing world. Greed for supremacy in the world has made China into not only a scheming demon but also a highly technical power. Views differ on its capability. Some are of the view that it will be unable to take on a war beyond a few days. But even a day of war, shall cost dearly to both. It costs Blood, Lives and despair in hundreds of homes, not to mention the cost of it to the nation. We are ready for a two front battle, as the environment believes. But do we notice, in the meanwhile Russia has moved its troops along the Chinese borders on its Eastern periphery. The USA has threatened China with its Maritime presence. All this bodes for very frightening prophecies. By November, we could actually be looking at a probable World War of sorts on our Northern and Western regions of Asia. We are looking at an insanely aggressive China in Hongkong, Taiwan, South China Seas, India and Russia borders, and even in the Space and Electronic domain.

Our Defence budget has sunk to an abysmally low 1.2 of the GDP. A war cannot be fought and won by bravery alone. It will not be a battle of fisticuffs like Galwan. It will be a highly technical war, supported by thousands of troops on both sides. The Chinese have dug in and are not willing to move back. So have the Indian forces. Both sides, seem to be reconciled to face the Ladakh winters in the same posture. Perhaps China is waiting for winter to launch its offensive in the East, while our attention is distracted by the ruse of Ladakh ingress..

As leaders, the Politicians surely understand, that to emerge as a ‘super power’ will never be easy. Hon’ble Ministers Shri Rajnath Singh’s and Mr Jaishankar’s visits abroad give us some security---how much---we don’t know. The newspapers give us assurance that no more build up will be there from either side. But is our adversary trustworthy?

Recently the Defence Minister acceded that it is not possible to resolve border issues with talks. We need ‘credible deterrence’ to in order to resolve the border issue, even if it be with talks. The soldiers' “Fire and Fury” is intact, but of not much value. The Eastern Theatre also is threatened by unforeseen action. Chinese are slowly inching their way into eastern Bhutan and the day is not far off when our entire defence preparedness will be challenged. Our troops could be spread very thin over the 3500 kms borders.

China is suffering its own internal problems of Covid, another tick borne virus that carries with it the risk of becoming another pandemic. It faces unemployment and falling employment rates, Hongkong unrest and is being boxed in by the US and Russia. We too must be adequately prepared. China is being very devious, in keeping India occupied with border skirmishes on all fronts, so as to thwart our multi directional thrust in achieving global positioning. We must not be outwitted.

“1962, A War That Wasn’t” by Shiv Kunal Verma, prepares us for such scenarios that we, as a nation, do not envision because we trust our Netas, our hierarchy of bureaucracy and the forces, to lead kindly light and to lead us to pasture. It provides insight to lay people, looking for answers to the fiasco that was 1962. But what it truly clarified was that we lost not to the Chinese, we LOST TO OURSELVES.; Our faulty planning and lack of foresight. It must not happen again.

2020 has been an ugly year. Let us not add another chapter of pain and loss to it, by being ostriches with our head in the proverbial sand of “China will not attempt to transgress”. It ALREADY has.

We, as a country, are only as strong as the hands that hold the reins. The stronger those hands are, the stronger we shall be. China has declared its intent. We are a nation threatened by aggression. Defeat and accepting subservience to treachery, in this time, when India is aiming for super power status and world leadership, is not an option, dear countrymen. Let us not nurture feet of clay. Instead, be sure footed and strong. It is the need of the time to be resolute in achieving our destiny, in the comity of nations, as is ordained.

( Views expressed in the letter are personal)