JNU Attack Is Brutal Act Against Reason By Majoritarian Government

Over the past 70 days, the borders of JNU have come down in the most disastrous ways, and the spirit of exchange between the nation and the university, the city and the campus gone toxic in the bitterest way possible.

More from Saikat Majumdar
View All

How did our nation arrive at a point where we can’t tell the difference between university students and masked goons?

The pollution in Delhi calls for a kind of a mask. Bank robbers need another kind. Who are the people who need full-face masks to enter a university campus, lurk behind trees, and go after students and professors with lathis and iron rods?

It is a cruel twist of fate that I write this sitting in Shantiniketan, in a house just outside Visva-Bharati, the university set up by Rabindranath Tagore, a man who imagined the classrooms walls to come down to give way to orchards fringed by the shoots of giant banyan trees, just as he imagined the walls of the university to come down to melt into the streets of the city and the winding alleys of the village.

But this was not the exchange between the town and the gown that Rabindranath had imagined.

For a country of high illiteracy and poverty, the people of India have lived through a richly paradoxical relationship with its universities. Distant as centres of higher learning must be to the masses, they have also been curiously closer to the fabric of the nation than say, their American counterparts, which dwell as oases of learning in an anti-intellectual country. 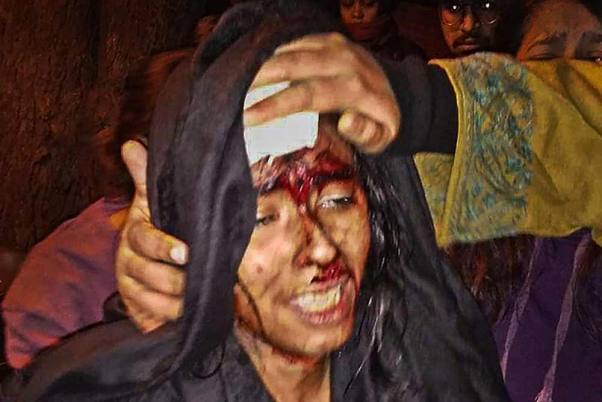 Over and above their primary location in major cities, it is the socialist vision of higher education, primarily framed by the nation’s founding Prime Minister, that has kept the cost of post-secondary education at an absurd low, compared to many rich western nations and has brought such people into its folds as would have remained far outside its farthest walls had they followed a private or a corporate model.

Also Read | We Are Fighting To Save Last Bits Of JNU’s Essence: JNUSU President Aishe Ghosh

No university in the nation has illustrated this principle of diversity and inclusion more than the one in the nation’s capital that bears the name of that founding Prime Minister – Jawaharlal Nehru University.

The natural – and desirable – conclusion of this inclusive education is that it will radically transform ways of knowing, seeing, thinking and feeling that are enshrined by the dominant class of society – the class far too likely to set up universities after their narrow vision of excellence. The price to pay for this transformation is the sound of voices that sound shrill and cacophonous to privileged ears, which grow shriller and more cacophonous as the polished accent of privilege try to suppress them.

Over the last 70 days, we have experienced the roughening of this cacophony against brutal attempts of suppression by a majoritarian government, that -- and it comes as surprise to none -- hates the idea of JNU as much as its practice.

Unwanted, unwashed, impure kinds of masses are already here, the tukde-tukde gang to take apart a certain idea of the nation. What they deserve is a narrative of criminalisation. In this country, taxes are easily mistaken as dole. If we’re paying for the education of the poor, they better shut up and tow our line, they articulate. That misses out the vital point that a diverse student body is not a favor the university does to society, but something the university needs for its own sake, to produce different ways of being and knowing.

Over the past 70 days, the borders of JNU have come down in the most disastrous ways, and the spirit of exchange between the nation and the university, the city and the campus gone toxic in the bitterest way possible. From where I live most of the year, I can walk to JNU in fifteen minutes, so it’s literally my neighbourhood turmoil. But it has become the bitterest neighbourhood turmoil for countless student, youth and citizen groups around the nation.

The majoritarian, anti-education alliance has done everything in its power to delegitimise the dissenting voices in the beautiful, red-brick campus. The final stroke was the violent entry of people in criminal masks on Sunday to beat up students and teachers. We are at that point in the history of the nation when a university that paves its way for the disenfranchised is too easily reconstructed as a den of criminals.

People are planning candle-lit march at Visva-Bharati in support of the violated students and teachers at JNU. It’s in tune with the solidarity marches happening all over the nation, and it’s different. While we keep the violence in mind, we will also be praying.

Also Read | ‘It’s Clear Who They Were’: A JNU Teacher’s Account Of What Happened Inside Campus

(Saikat Majumdar writes about arts, literature, and higher education, and is the author, most recently, of the novel The Scent of God (2019). @_saikatmajumdar. Views expressed are personal)