India-Israel Ties Should Be Sustained, But Not At The Expense Of Loyalty To Palestinian Cause

India should not dither on its long standing and unequivocal support to the struggle of the Palestinian people for national liberation and for an independent State. 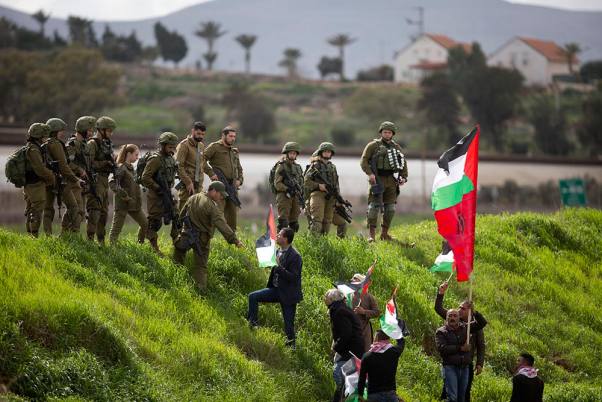 When Prime Minister Narendra Modi visited Israel in July 2017, he became the first ever Indian Prime Minister to visit the West Asian country. Indo-Israeli relations have witnessed a sharp upswing ever since the Bharatiya Janta Party (BJP) came to power and there have been several bilateral visits by senior ministers from India to Israel and vice-versa. India is now the largest purchaser of Israeli military equipment.

The international community has been closely observing the growing defence and strategic cooperation between India and Israel. Israel has in the last couple of years provided the Indian armed forces with radar and border monitoring systems. Israeli companies have been making millions of dollars upgrading MiG-21s and other Soviet-era aircraft. They have recently bagged a contract to provide the avionics for the Indian Air Force MiG-27s.

After visiting Israel in July 2017, Modi visited Palestine in February 2018, again a first by the Indian Prime Minister. During his visit, Modi said India hoped to see an “independent Palestinian state living in an environment of peace.”

In November 2019, on the eve of International Day of Solidarity with the Palestinian people, PM Modi said India hopes for an early resumption of dialogue between Palestine and Israel for moving towards a comprehensive and negotiated resolution of the Israeli-Palestinian conflict.

The Israel-Palestine conflict is an unresolved issue of international politics dating from the end of the First World War. Palestine was a part of the Ottoman Empire. During the First World War, the Ottoman Empire sided with Germany and was defeated. It was then dissolved. Its successor, the Republic of Turkey transferred Palestine to the British Empire. In 1917, British foreign minister Arthur Balfour issued what is known as the Balfour Declaration for the establishment in Palestine of a national home for the Jewish people. In 1947, the United Nations General Assembly approved a plan to partition Palestinian land and proposed a Jewish State and an Arab State on that land. The Arab State of Palestine included the West Bank, East Jerusalem, the Gaza Strip and some other territories. The Jewish State of Israel was established in 1948 and several wars between the Israelis and the Arabs followed.

Mahatma Gandhi wrote in the Harijan: “The cry for a national home for the Jews does not make much appeal to me. Why should they not, like other people on earth, make that country their home where they are born and where they earn their livelihood? Palestine belongs to the Arabs in the same sense that England belongs to the English or France to the French. It is wrong and inhumane to impose the Jews on the Arabs. What is going on in Palestine today cannot be justified by any moral code of conduct. Surely it would be a crime against humanity to reduce the proud Arabs so that Palestine can be delivered to the Jews partly or wholly as their national home. The nobler course would be to insist on a just treatment of the Jews wherever they are born and bred. The Jews born in France are French in precisely the same sense that Christians born in France are French”.

It has been more than 50 years since Israel annexed the Palestinian territories of West Bank, East Jerusalem and Gaza Strip following the six-day Arab-Israel war of June 1967. In the Six Day War of 1967, Israelis captured and occupied the West Bank, East Jerusalem and the Gaza Strip. Thereafter, Israel tightened its hold over these territories, crushed Palestinian resistance and created hundreds of thousands of refugees. Its discriminating policies affecting every area of Palestinian life have invited comparison with the South Africa Apartheid regime.

The United Nations Security Council has repeatedly condemned Israeli depredations in the occupied territories. Last year, a United Nations Security Council resolution directed Israel to immediately and completely cease all settlements in the occupied territories including East Jerusalem. Amnesty International has held Israel guilty of war crimes and murder of thousands of innocent Palestinians and demolition of their homes.

India was the first non-Arab country to recognise the Palestinian Liberation Organization as the sole legitimate representative of the Palestinian people. A PLO office was set up in New Delhi in 1975 and full diplomatic relations were established in 1980.

In 1991, during my tenure in the Ministry of External Affairs, I was asked by Prime Minister Narasimha Rao to ensure the establishment of diplomatic relations with Israel so that India could assist the Palestinian cause in a more efficient manner. I met with the PLO chairman Yasser Arafat at his headquarters in Tunis. Arafat told me that he was confident that India would not vacillate on its commitment to the legitimate demand for an independent Palestine and that he had no objection if we established diplomatic relations with Israel. I then held a meeting with the Israeli foreign minister Shimon Peres at the United Nations in New York and diplomatic relations with Israel followed. India continued its unstinted support to the Palestinian people in their quest for a strong and viable State and provided material as well as technical support to the Palestinian government in their efforts at nation building.

At present, most countries of the world recognise the State of Palestine with the exception of the United States and some of its Western allies. Even in the West, support for the Palestinian cause is increasing. It is ironical that while the West, the architect of the Palestinian plight, is finally trying to reach out to the Palestinians, India, the old supporter, has almost vanished from the scene.

For the first time, in 2015, India abstained on a UNHRC resolution calling for a probe by the International Criminal Court into war crimes by Israel. It continued to abstain on this resolution in 2016 and thereafter.

Israel ought to comply with international law and the United Nations resolutions and vacate the occupied Palestinian territories of West Bank, Gaza Strip and East Jerusalem. All future agreements between India and Israel should explicitly exclude Jewish settlements in the occupied territories.

The relationship between India and Israel should be sustained but not at the expense of our traditional loyalty to the Palestinian cause. India should not dither on its long standing and unequivocal support to the struggle of the Palestinian people for national liberation and for an independent State.

(The writer is a former Union Minister. Views expressed are personal.)