The short-term measures by the government to ensure the immediate safety, food and shelter for the migrants will fail to suffice in the long run as they do nothing to tackle the underlying causes that contribute to the systemic discrimination and deprivation of the migrants. 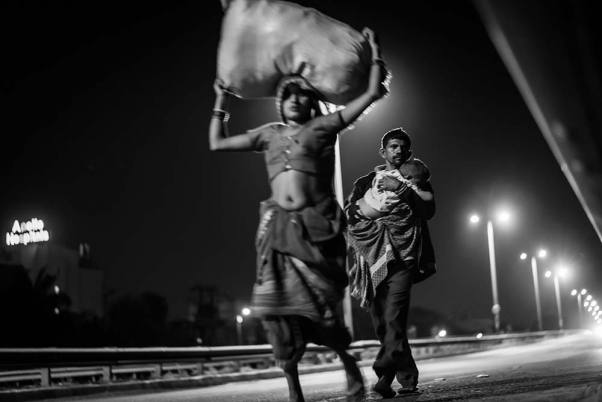 The spread of novel Coronavirus has created its own spectrum of distress and turmoil for individuals across social groups around the world, but more for those who exist at the margins of society. After the nationwide lockdown was imposed on March 25, in the weeks that followed, chaos ensued with the migrant workers vying to return to their native villages. Many of them found themselves out of job and were left without any monetary resources which could help them sustain in the cities. The Centre for Monitoring Indian Economy (CMEI) noted that since the lockdown the labour participation has been constantly declining (currently at 35.4%), while the unemployment rate showed volatility by varying between 21% and 26% in the month of April.

With the closing of state borders and suspension of public transport, many of them desperately embarked on a journey back home. While some thronged to the bus stops, others resorted to setting out for hundreds of kilometres on foot. This suffering has further been compounded by harassment and violence at the hands of the state machinery. Data from World Bank’s ‘Covid-19: Crisis Through a Migrant Lens’ highlights that over 40 million internal migrants have been impacted in India.

The governments, both at the Centre and the State level, have responded to the situation by announcing a slew of relief packages and organising for the provision of food and shelter. Employers in various sectors have been prohibited from deducting workers’ wages and made evictions from rented housing to be a penal offence. Several states have arranged buses for bringing them to their villages. Recently, the Railways started running Shramik Special trains for them. However, thousands if not millions still remain homeless and hungry due to the skewed implementation of the relief measures across states. The relief amounts, released in spurts by both Centre and State, though large in their totality aren’t enough for individual migrants and their families to sail through this period of adversity and the events that will follow.

Last week, the Centre announced Rs 20 lakh crore stimulus package which aims at steering the dwindling economy of the country. Amongst the various allocations, the second tranche included measures for the migrants, street vendors and farmers. A sum of Rs 3500 crore has been assigned to provide free food for the next two months to almost eight crore migrants who aren’t under the coverage of National Food Security Act 2013 nor possess ration cards. But it does nothing to address the existing logistical issues, such as incomplete value chains and lack of documents, in the implementation and dissemination of essentials to the target beneficiaries.

In the last three decades, the expansion of the country’s urban contours has resulted in large-scale poverty induced rural-urban migration. Most of these migrant workers came to urban centres in search of a better income and opportunities. A majority of them get involved in low-paying informal work in sectors such as manufacturing, construction, transportation, textiles, services and domestic work. According to the Census data, India saw an increase of 139 million (accounting for inter and intra state movement) to its migrant workforce. The internal migrants almost doubled during the last two-decade period, from 220 million in 1991 to 454 million in 2011. Besides, data from the 2017 Economic Survey more specifically highlights that there were around 9 million inter-sate migrants in the country between 2011 and 2016 annually. Most of them belong to the northern belt – from states like Uttar Pradesh, Bihar, Jharkhand, and Rajasthan.

Their families, who often stay back in the native villages, rely on the money which they remit back home. Their work and socio-economic conditions do not permit them the privilege of practicing social distancing, thus, exposing them to a higher risk of contracting the virus. In addition, these jobs fail to guarantee them any form of social protection or a safety net as their work arrangements often weigh in favour of their employers and contractors. They are barely able to afford their stay in the cities, by finding housing in cramped spaces and lacking basic facilities.

Events such as health emergencies, in this case the novel coronavirus, have the tendency to increase the vulnerabilities of those who are already marginalised and survive in abysmal conditions even during ‘normal’ times. In times such as these, the rhetoric against migrant communities is given space to flourish, leading to them being viewed with either suspicion or as a nuisance. Even though the government at present has a health crisis of large proportions at its hands, ensuring that they provide special focus to the humanitarian responsibilities that befall them, remains more urgent than ever.

The pandemic has in its own ways brought forth the glaring reality of the invisibility of migrant population, both in our cities and policy decisions. When we think of cities, we focus on their characteristics as the sites for production of services and innovation, possessing vast physical infrastructure, linkages with the global economy and the capacity for global communication. But we rarely reflect about the contributions of the service providing migrants whose sweat and toil are the fuel which run our cities. Aplenty of the existing issues faced by the migrant workers have only been insufficiently addressed in the past. The subsequent fallouts that the economy will witness in the near future are only going to exacerbate their plight and make survival all the more challenging for them.

At present, there is no comprehensive updated countrywide data which offers estimates about the migrant population who are spread across different states in various occupations and jobs. This raises critical questions about the transfer of the proposed government aid to these groups. Literature has shown that most migrant workers are not registered with welfare boards and lack other institutional devices such as ration cards and bank accounts. This begets an urgent need for information to be collected and updated on this section of the populace as digital tools, as Direct Benefit Transfers can be employed efficiently only when data is guiding their usage. This is the opportune time to collect the detail information of migrants both by sending and receiving states.

The short term measures being undertaken currently will ensure the immediate safety, food and shelter for the migrants. But these responses will fail to suffice in the long run as they do nothing to tackle the underlying causes that contribute to the systemic discrimination and deprivation of the migrants.

There are a number of futures possible in the post-Covid world, especially for the migrant workers and families. It is upto the governments and society as to whether this future will be more humane and will do something to reduce the precarity characterising their daily lives or will it continue to make them languish at the bottom of the labour hierarchy. The Working Group on Migration formed in 2015 by the Ministry of Housing and Urban Poverty Alleviation stated that migrant are economic agents who contribute substantially to economic growth to both, the destination and the place of origin. The remittances aid to the development of their native states, and also help to push the economy of the destination state. Therefore, it is the time for both the states and Centre to act and secure the lives and livelihood of these economic agents.

(Balwant Singh Mehta is a Senior Fellow and Apoorva Gupta is a Research Assistant at the Institute for Human Development, Delhi. Views expressed are personal.)