These protests are not just a reaction to the farm laws. It is a moment in time when political, social and spiritual forces have converged under unprecedented circumstances. 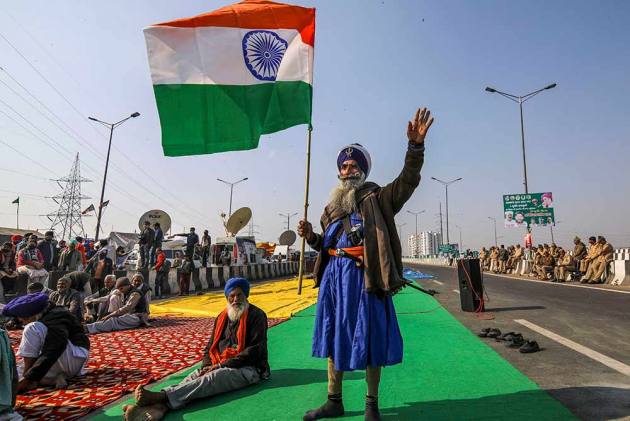 Mohkam Singh, a 65-year-old farmer from the Khalsa warrior community of Ludhiana, radiates a quiet conviction.

“What you see here is a Sachh Yug,” says Singh just outside a tent at the Singhu border. “Outside, there’s a Kal Yug where people are fighting to prove which religion is greater.”

Protesting farmers such as Mohkam are not only against the Centre’s new farm laws but are also against the erosion of the spiritual identity of agricultural communities across India. At both Singhu and Tikri borders, we witnessed a cry from farmers for recognition of their sacred relationship with the soil. For them, execution of the laws will not only play into the hands of private merchants but also disrupt their identity as “toilers and givers of grain.”

Not only that, the farming communities believe they are humanity’s call to conscience in the fight against climate change. Undermining them could shrink the scope of a collective movement towards a greener and more spiritually conscious planet.

While demonstrations, poetry readings, film screenings and ladles of generosity at langars have been highlighted as the means to surcharge the community spirit at these protest sites, it’s also important to understand the religious underpinnings of the farmers’ protests.

In the expansive demonstration spaces we visited last week, we saw the critical role of religion in informing this grassroots movement. The Nihang Sikhs, for instance, with their ornamental attires and displays of martial skills are here to set a different tone from a purely ceremonial one. Part-farmers, part-religious leaders, they believe the protests are a reassertion of the rights of the underclasses—farmers, women and religious minorities—while they are there to merely provide the spiritual impetus in this “holy land.”

The Nihangs asserted that the political leadership has undermined the solidity of the movement shaped by eclectic traditions from Punjab and Haryana, along with interfaith work.

Muslims from Punjab’s Malerkotla district, who have been helping the farmers since the inception of these protests, have now set up community kitchens on the borders. In return, Sikh farmers are rallying around their Muslim brethren during prayer rituals. A Muslim man from Malerkotla told me the only religion at these protests is the urge to stand together.

Around these sites, Christian trusts and philanthropists are doling out free medicines to ailing farmers and their families. Trolleys and vans with banners announcing interfaith work by Christian charitable organizations suggest this isn’t a one-dimensional movement.

At the community kitchens, Sikh women can be found flipping rotis beside Hindu woman sorting vegetables for the day’s langar. A few steps ahead, Muslims are preparing Biryani.

While the memories of the resilience of anti-CAA protestors across religious lines have invigorated the protests this year, the farmers want to keep their movement exclusive.

“The farm laws will tear apart the entire country,” said Mata Singh, a Sikh farmer. “Farming is fertility, and these laws will disrupt the cycle of life if they’re allowed to pass.”

Even the women have joined the chorus. They believe the protests are not just against the laws, but also against the upturning of the social and spiritual identities of farming women.

“Discrediting our value in the ecosystem is like discrediting the importance of tribal and agricultural deities across spiritual traditions,” they noted.

The farming women were especially critical of the inaction over the deaths at these protests, including that of Haryana-based Sikh priest Baba Ram Singh, who shot himself near Singhu “to express anger and pain against the government’s injustice.”

As the protests surge and the crackdowns escalate, more interfaith and community support groups will join to free the movement of the idea that it’s pandering to specific groups or communities. More religious leaders from different parts of India are already on their way to set up camp here.

It’s clear this isn’t just a reaction to the anti-farmer farm laws. This is a moment in time when political, social and spiritual forces have converged under unprecedented circumstances.

(Priyadarshini Sen is an Independent Journalist based in Delhi. She writes for Indian and US-based media. Views expressed are personal and do not necessarily reflect those of Outlook Magazine.)