COLUMN | Being Anti-Establishment Has Always Been JNU's Flavour, Govt Stifling It

JNU has a tradition of participative decision-making process besides its free debate and access to university authorities. 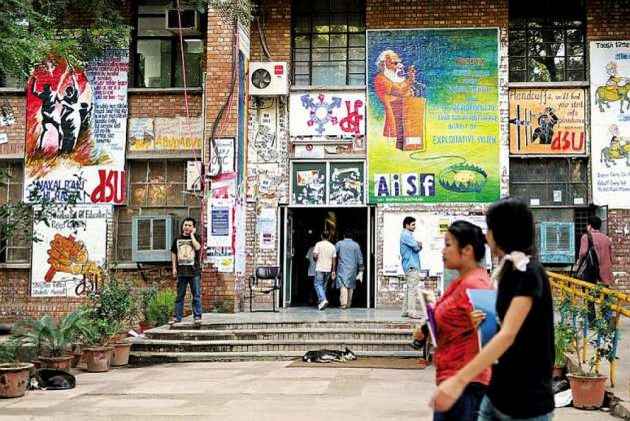 First, a disclaimer. Former Jawaharlal Nehru University students like me are often illustrated as examples of how public funds were wasted by those who hung around in the campus for several years without "doing anything". To explain, I enrolled in the university in 1979 for a Five Year Integrated Masters programme and dropped out in 1983 without picking up even a bachelor's degree.

Thirty-six years, thousands of bylines, and four books later, I reiterate with pride that had I not been in JNU at a certain point of history, having sensitive and knowledgeable teachers and peers I was fortunate to have, there is no way that I would have been me.

Only a minuscule section of students had stopped pursuing graduation or PG courses before its completion, although a larger number could not complete their MPhil or PhD dissertations for variety of reasons ranging from necessity of finding a job, securing one or even plain lethargy and inability to remain focussed.

It is not being argued that there was great virtue in dropping out, but JNU respected individual choices and gave students the strength to decide for themselves, at times much against the wishes of their families. Those who made such decisions were never declared outcasts.

The university also permitted students like me to attend classes in disciplines for which they had not been admitted. A quiet word with the professor was all that was required to listen to lectures on history, political science, sociology and philosophy. And, many did give the inter-disciplinary approach of the institute.

Initially, these lectures made little sense to the uninitiated, but with time and discussions in the campus, concepts became comprehensible.

I had barely stepped inside the campus and completed registration formalities, that stories were told of how police snooped in during Emergency and detained students. Being anti-establishment was the flavour of the campus because everyone believed the State is never willing to give people their due.

Several heroes of the anti-Emergency struggle, existing office bearers of the students union and even their adversaries were identified for us from a distance. The awe for them remained only till the first chai together at Ganga, or any of the other, dhabas.

The spirit of democratic politics and mutual respect were integral to the campus and student politics. As subsequent events have shown repeatedly, students of JNU remain eternally rebellious. In 1980, shortly after her comeback as prime minister, Indira Gandhi took a vow to visit the university named after her father but where she was unwelcome.

I was part of those protestors who barricaded her entry forcing the university administration to provide passage for her cavalcade from another gate. Students joined protests against police atrocities, environment threatening development programmes and whenever there were brutalities against the poor and the marginalised.

Non-communist student organisation took out marches and mounted signature campaigns against Soviet invasion of Afghanistan. Despite their consternation for these protests, students wings of the CPM and CPI, SFI and AISF, did not clash with the protestors.

Violence was not part of the culture and an incident in 1978 was condemned in such terms that subsequent batches learned early that getting physical while politically contesting, was a strict no-no.

I could have paid more hostel and mess fees. But a huge number of my class or hostel mates would not have been able to pay anything more. Many of them were first-generation learners in their families and treasured the small amounts which were money ordered to them every odd month. JNU taught us to manage with meagre resources -- if even one was short, there was always a better-heeled friend willing to buy chai, or the dhaba owner to offer udhar. Much wouldn't have changed and it is time critics give a reasoned ear to the JNUSU arguments.

I met the portly chacha years after he wound shop in JNU at Jhunjhunu, shortly after the Roop Kanwar incident. He remembered the precise amount, although small, I owed him but refused to take it because he wanted me to carry the burden of zindagi bhar ki udhari.

JNU had cast its spell on him too, a man who came to the university to make some money and secure his old age and future generations! Like, to the old man, almost every student who passed through JNU's portals remain indebted to the institute.

Why has this regime targeted JNU since it came to power, especially since 2016? To understand this, one has to comprehend that despite several members of the alumni being important people in this government, including two cabinet ministers and CEO of Niti Aayog, the university carries the reputation of being the den of communists, a synonym for separatists and anti-nationals.

JNU is a metaphor for the present political establishment. It represents everything that is repugnant to it. Its existence thereby becomes a challenge to their idea of nation and nationhood. JNU has a tradition of participative decision-making process besides its free debate and access to university authorities.

By making decision-taking a one-way street, holding meetings clandestinely in places away from the campus, the administration has insulated itself and converted the university into an authoritarian set up. It is evident that the government chose a person to head the university who was least sensitive to JNU's traditions.

Events in JNU reflect how this regime wishes to structure and govern higher educational institutes throughout the country. Whenever the "shut down JNU brigade" got active and vocal in the past three years, I was reminded of a scene from Satyajit Ray's 1980s classic, Hirak Rajar Deshe.

The despotic king directs his education minister to shut down all schools in the kingdom because:

The ever pliant court-poet chirps at this point: