Shabnam Minwalla's 'Murder At Daisy Apartments' is an exciting murder mystery set in an apartment complex in Colaba, Mumbai, during the lockdown of 2020. 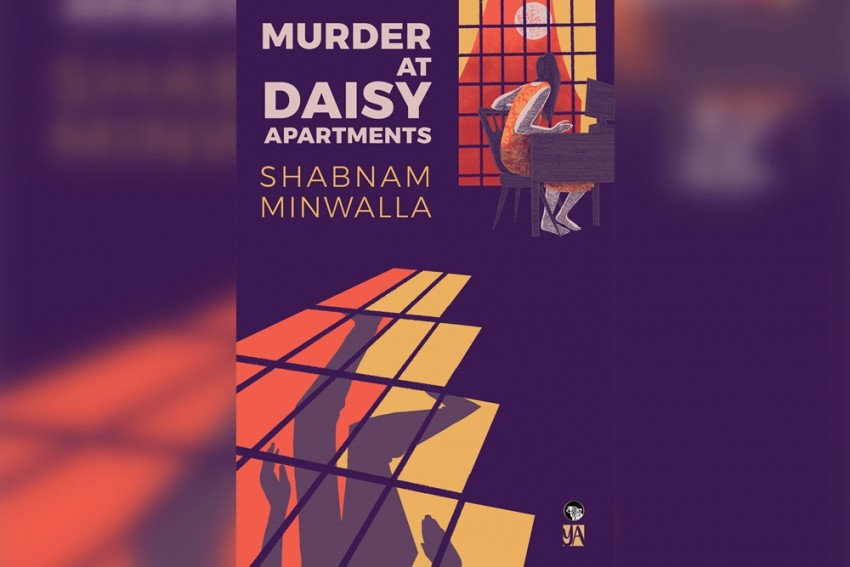 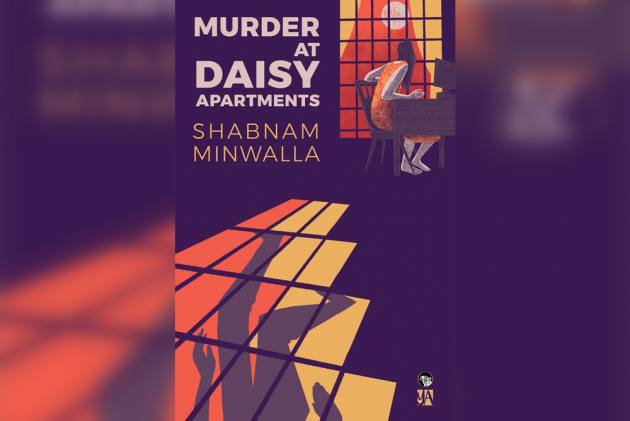 The first sign that something was amiss came just after lunch. I don’t know the nitty-gritties, of course. I wasn’t there. But after eavesdropping on about 300 phone conversations, this is how Shanaya and I pictured the scene.

Binaifer Marker had escaped the germy environs of Lily and Daisy Apartments and had holed up in the home of her younger daughter. Roxanne was flat-footed and teacup-eared, but I guess that has no bearing on this story.

Baman Marker had planned to decamp along with his wife, but at the last minute he changed his mind. Something had come up. Something important, but Binaifer never found out the details. All she knew was that he was fretful and kept asking if a parcel had been delivered to the house.

Binaifer didn’t want to leave without her husband, but Baman Marker insisted. He intended to follow soon. The plan was that Roxanne would send him her car at 4 p.m. that evening and that he would sneak away. But then Raghunath died in hospital, the BMC arrived to seal the building and the finger-wagging official refused to leave until Baman Marker was locked into the building.

Baman Marker was trapped but not defeated. He was confident that he would be able to leave the next morning.

‘Send the car as soon as I call,’ he had told Binaifer. ‘Now that I’m here, I might as well take care of some troublesome business.’

‘Have all your immunity boosters,’ Binaifer had said.

Baman Marker had promised that he would. ‘Don’t worry,’ he had told his wife. ‘It’s a matter of a day.’

Binaifer Marker was not worried. Maria was in the apartment and would make sure that the dinner was cooked, the dishes were washed and that Baman was comfortable.

On her part, Maria was thrilled to be in charge. She waddled by every half hour to check if Saab needed anything. The evening proceeded peacefully—in Maria’s eyes, at least—till she popped into the living room at around 11.45 p.m. and started a conversation. She wanted to know if Baman Saab needed water, his phone charger, a cup of tea, a window shut, a window opened…

Baman Marker was a habitual passer of soft, hurtful remarks rather than a screamer of insults. But this time he exploded at Maria. He said that the only thing he needed was sleep, and that Maria was to stop disturbing him. He told her to go to her room and to leave him in peace. ‘I don’t want to see your face till morning,’ he shouted. ‘I don’t want to hear your voice till morning.’

‘He was shaking and he banged into a table and madam’s glass cat almost fell. He told me that my voice was giving him a headache.’

Maria was offended. She pursed her lips, stalked out of the living room and decided that she would follow Baman Marker’s instructions to the last letter. She went straight to her bedroom at the very back of the house, where she shut the door, switched off the lights, covered herself from top to toe with a blanket, and sank into a deep sleep. Even if she heard sounds, she didn’t bother with them. They were not her business.

Soon after this, at 11.55 p.m. on Friday night, Binaifer called her husband for the last time. During the conversation he said that he was exhausted. He got shouty and aggressive when she asked him to bring along her inhaler and the two avocadoes that were in the glass bowl in the kitchen.

About twenty minutes later, Baman Marker followed up with a curt message to his wife. ‘Am not to be disturbed.  Will call when I wake up.’

Which is why Binaifer Marker waited till 11 a.m., before trying to contact her husband the next morning. It was also why she didn’t fuss when he failed to answer the phone. Like the rest of us, she assumed that he was sleeping or sulking or that his phone battery had died. It was well past noon by the time she got jumpy.

Maria reported that Baman Marker was still in his bedroom and that his door was latched. At which point Binaifer Marker had a panic attack and had to be put to bed. Lunchtime came and went before Roxanne called Kavita Lamba.

The moment Kavita Lamba understood the problem, she donned her white mask, sanitized her hands and climbed the three floors to the Marker apartment. Maria let her in, and together they pounded on the bedroom door.

No answer. So Kavita Lamba summoned her husband, who did some half-hearted tapping of his own. Again, no answer. At which point the Hon Secretary decided that it was time for decisive action. She sent her husband to ring a few doorbells, and she herself made some urgent calls.

Everyone was at home, and everyone was available—which is, I guess, the only advantage of being stuck in a sealed building. Ten minutes later, the Marker apartment was teeming with masked men and women, all reeking of hand sanitizer and nervous energy.

Mr Burman and Mr Lamba lurked at the fringes, Kavita Lamba and Lina Almeida issued rapid-fire instructions. Amrita Aunty made sure to grab a ringside seat. But it was the Khambatas who took charge. They were business-like about it, as if kicking in bedroom doors was a fortnightly occurrence in their lives.

The door to the Marker bedroom looked glossy, white and solid. But the headstands and chia seeds had done their job. Neville and Jeh Khambata went into a huddle with their father, after which they went at the door. All it took was a well-aimed kick for the wood to splinter. Two more kicks and cool air-conditioned air leaked into the warm living room. Along with it came an ominous whiff—a hint of the ugliness that lay within.

There was a general backward shuffle, as the neighbours shrank away from the sagging door.

Neville and Jeh Khambata stepped aside and it was their father who gave the door the firm shove that caused it to swing open. On the other side lay the blue and brown bedroom of Baman and Binaifer Marker. Heavy blue curtains with brown swirls blocked the ferocious afternoon sun and kept the room dim and twilit. Which is why it took the neighbours a moment to process what they were seeing.

The glossy satin quilt on the wide bed was caked with vomit. A porcelain figurine lay smashed and shattered on the floor. A purple plastic folder had fallen on the brown rug, and papers were scattered across the room. A chair had tumbled onto its side and a fruity-grassy odour hung heavy in the chill air. A cupboard door was wide open. But it was the man sprawled on the bed upon whom all eyes were fixed. Baman Marker was lying at an odd angle, face-down on top of the blue quilt. He was dressed in a crumpled pant and shirt and he was very, very still.

Somebody gasped. Somebody screamed. Maria sobbed at the top of her voice. ‘Is he…’ Mr Burman asked, unable to utter the word that hovered in the rank, air-conditioned air.

This was the stricken tableau into which Mr Habibullah stumbled. Mr Habibullah was just about five years older than my father, but his hair was smudged with white. He had purple pouches under his eyes and his clothes drooped, giving the impression of a deflating balloon. He shuffled into the living room, speaking without punctuation or inflection. ‘…say I’m sorry I took so long I could not find my spectacles I don’t know if it happens to you but it always happens to me…Rashida said he has only caused trouble but I must pay my respects it is not right to speak ill of the dead—’

‘What do you mean?’ Kavita Lamba almost shrieked.

‘Why are you saying that Mr Marker is dead?’

The tone frightened Mr Habibullah who, shaking violently, retreated from the room, still talking in a monotone. Even then, nobody moved till Darius Khambata walked slowly into the blue and brown bedroom, skirting fallen furniture and porcelain shards. He leaned over Baman Marker and said in a shaky, low voice, ‘He’s breathing. Call a doctor. Call an ambulance. Now.’

After that, there was chaos. Everyone grabbed their phones and dialled doctors and ambulances. This was easier said than done. All the doctors and all the ambulances seemed busy tackling Covid-19. No one agreed to help.

It was a huge relief when Amrita Aunty finally got through to Dr Dilip Mirchandani. Dr Mirchandani was such a high-profile heart specialist that it took two months to get an appointment with him. He was not the sort of doctor who dropped everything to penetrate a sealed building and examine a complete stranger. It was fortunate, then, that Dr Mirchandani was married to Amrita Aunty’s cousin. It was also fortunate that he—like anybody with an iota of sense—enjoyed her fiery pani puri and her pungent humour.

‘Dr Mirchandani is coming,’ Amrita Aunty announced finally. ‘But it will take him about forty-five minutes.’

After that, there was nothing to do but to make a difficult phone call and then to wait. Lina Almeida made the call. ‘You have to be strong,’ she told Binaifer Marker, while the rest of the room stood at attention and Maria wailed. ‘Baman is unwell. It is difficult to say how unwell, but it looks serious. We have called the doctor. Yes, it might be best if you or Roxanne come. Someone will need to take charge.’

After she disconnected, the room lapsed into an awkward silence, punctuated by the fat tuk tuk of the grandfather clock. Most of the people there had been neighbours for years. They’d attended each other’s anniversary parties, complained about each other’s leaking bathrooms and  stumbled upon each other’s secrets. But nobody felt up to chatting till Mr Burman and Mr Lamba—the relative newcomer and the perennial outsider—spoke.

‘Strange that we don’t have a single doctor in the building. You know, Darius almost became a doctor and then the universe stepped in. There is a reason for everything,’ Silloo Khambata babbled and then turned to her sons, who were looking queasy and pale. ‘Neville, Jeh, you go down. No reason for you to wait.’

‘You go too,’ Darius Khambata said, and started steering his wife out of the room. ‘There’s nothing to do here. I can stay and maybe one more person?’

That served as a signal. The room rapidly emptied out till only Maria, Kavita Lamba, Lina Almeida and Darius Khambata remained. And, of course, the prone figure on that glossy blue quilt—the husk of the Hon Chairperson.