That is where China wants to be and that is where it is ensuring that the Olympic torch is taken too -- at least, on top of Mount Everest. Quietly, without too much of a hype. 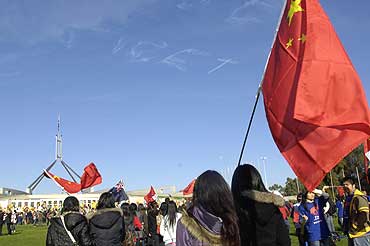 As the Olympic torch reaches the culmination stage of its world run in Vietnam, a special lantern lit from the same flame has been taken to the base camp of Mount Everest on the Tibetan side of the Himalayan mountains for being taken to the top of the Everest. A team of 30 journalists -- 19 Chinese and 11 representing foreign media -- was also taken from Beijing to the camp on April 28, 2008, to cover the event. A team of Chinese mountaineers has been acclimatising itself at the base camp before starting the climb. The Chinese have not announced when the climb will start and when the final climber or climbers with the lantern will reach the summit, but it is expected to be before May 10, 2008. Previously, the Chinese were planning to make this a high-profile event. However, in view of the continuing unrest in the Tibetan-inhabited areas, they have now been treating it in low key.

The torch, which has reached Vietnam after being taken to Japan, South Korea and North Korea will be taken across China covering all provinces. It is expected to reach Lhasa on June 19, 2008. It will first be taken to the Potala Palace, the historic residence of the Dalai Lamas. It will be received by the Chinese Communist Party nominee as the Panchen Lama. Thereafter, it will be taken across some areas of Tibet. In the expectation that by then the situation in Tibet would have returned to normal, the Chinese have been mobilising members of the Han Chinese community in Tibet and other provinces of China to assemble at Lhasa to give a big welcome to the arrival of the torch in Lhasa and to greet its reception in the Potala Palace by the Chinese-appointed Panchen Lama. There is a possibility that one or two important leaders of the Chinese government may also go to Lhasa to be present on the occasion.

If the situation in Tibet improves by then, the Chinese are likely to remove the restrictions on the visits of foreign journalists and tourists to Tibet so that they could see the big welcome being planned for the torch. Worried over the possibility of fresh demonstrations by Tibetan youth and monks on the occasion, only carefully vetted members of the local Tibetan community will be allowed to participate in the function.

There are conflicting signs from Beijing regarding the reported willingness of the Chinese for a fresh dialogue with a representative of the Dalai Lama. While the only incomplete indictors on the subject have come from the Hsinhua news agency, the government-controlled media have kept up their campaign of demonisation of the so-called Dalai clique and the Tibetan Youth Congress (TYC), which is repeatedly and virulently projected as a terrorist organisation. While the Western countries have welcomed the reported Chinese willingness for a fresh dialogue, the Dalai Lama has not reacted enthusiastically He and his advisers seem to suspect that it is a tactical move to deflect international pressure and to lower the temperature in Tibet.

On April 25, 2008, the Hsinhua circulated the following report: "China's central government department will meet with Dalai's private representative in the coming days, Xinhua learned from official sources on Friday. In view of the requests repeatedly made by the Dalai side for resuming talks, the relevant department of the central government will have contact and consultation with Dalai's private representative in the coming days," an official said. "The policy of the central government towards Dalai has been consistent and the door of dialogue has remained open," he said. "It is hoped that through contact and consultation, the Dalai side will take credible moves to stop activities aimed at splitting China, stop plotting and inciting violence and stop disrupting and sabotaging the Beijing Olympic Games so as to create conditions for talks." It is interesting to note that the Chinese do not call His Holiness as the Dalai Lama. They insist on referring to him only as Dalai in order to underline that they do not recognise him as the leader of the Buddhist religion in the Tibetan-inhabited areas of China.

Subsequently, the US-funded Radio Free Asia reported as follows: "Kalsang Gyaltsen, the Dalai Lama’s special envoy in Europe, has acknowledged that he was contacted by Chinese authorities about the proposed talks but has given no details. The exile Tibetan prime minister, Samdhong Rinpoche, suggested the time wasn’t right for renewed discussions. "We feel it will require normalcy in the situation in Tibet for the formal resumption of talks, and we are committed to take all steps including informal meetings to continue in bringing about this situation,' he said in a statement. "It is our position that for any meeting to be productive it is imperative for the Chinese leadership to understand the reality and acknowledge the positive role of His Holiness the Dalai Lama rather than indulging in a vilification campaign that is even contained in this same Xinhua report," Samdhong Rinpoche said.

Western governments have been under contradictory pressure from their human rights activists and business houses. While the human rights activists have been urging that they should keep up the pressure on China on the Tibetan and other issues, the business houses, which have invested heavily not only in the Chinese economy, but even in the Olympic Games itself, have been urging that the Dalai Lama should be advised to tone down his campaign against the Chinese and keep the TYC under control. They are against any action against the Olympics or before the Olympics, which might be seen by the Chinese people as an attempt by the West to humiliate China and its people.

In the debate in Chinese web sites, there have been references to what is described as the asymmetric soft power enjoyed by the West by virtue of its perceived control of the global media. There is anger over what the Chinese people see as the exaggerated focus on the versions of His Holiness and a black-out of the versions of the Chinese government. There have also been allegations of mischievous coverage by TV channels such as the BBC and the CNN. It is pointed out that when violence broke out in Lhasa on March 14, 2008, with widespread attacks on the members of the Han community and their property by the Tibetans, the Western TV channels showed visuals of the action being taken by the Nepalese and the Indian police against Tibetan refugees demonstrating in Kathmandu and Dharamsala without specifying that these visuals were from Nepal and India and not Tibet. Such projection tended to create a wrong impression in the minds of the viewers that these scenes were from Lhasa.

The Chinese have sought to counter the soft power of the Western media through the soft power of the patriotic response of the Chinese people and the overseas Chinese diaspora. After being on the defensive for some days in the wake of the determined anti-Chinese campaign mounted by the Tibetan diaspora in co-ordination with their Western supporters, the Chinese went on a patriotic offensive by mobilising hundreds of the overseas Chinese in South-East Asia, Australia, Japan and the two Koreas to welcome the Olympic torch and to counter the demonstrations by Tibetans and their supporters. The overseas Chinese community in Europe also held patriotic demonstrations to condemn the attacks on the torch in London and Paris.

Similar demonstrations were organised in China itself particularly against the French and the French super market chain called Carrefour. There were calls for an economic boycott of the French. This had an immediate impact on the French. President Nicolas Sarkozy of France rushed two special emissaries to Beijing to soothen Chinese sensitivities. While continuing to call for a resumption of the dialogue between the Chinese and the Dalai Lama, the French have conceded that the conditions imposed by the Chinese for this are reasonable.

B. Raman is Additional Secretary (retd), Cabinet Secretariat, Govt. of India, New Delhi, and, presently, Director, Institute for Topical Studies, Chennai. He is also associated with the Chennai Centre For China Studies.