At the Nano launch, a journalist from Calcutta asked Ratan Tata what he had to say to Mamata Banerjee. With a big smile, Tata responded, "The only thing I have to say to anyone at this point is Good Afternoon!" 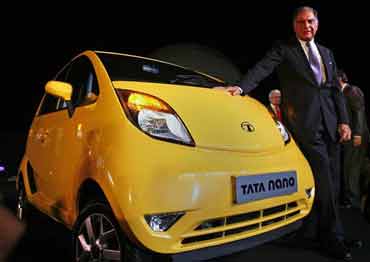 At a press conference held before the launch of the Nano, one scribe asked Ratan Tata why he chose to launch the car ahead of starting production at Sanand. Tata promptly recollected something his "good friend" and Ferrari boss Luca di Montezemolo had told him at the Paris Motor Show last year. "He told me that launching cars is like waiting for a woman. If you wait too long, they grow old and fat. This is a challenge we all have to face."

By his own admission, the reaction from various quarters -- domestic and international -- has startled Tata. But given all the attention the project has received, Tata and team have been quick to turn it around to their advantage. It's no wonder that the commercial launch of the Nano meant a packed day for both Ratan Tata and Tata Motors' head Ravi Kant.

The day began with an editors' lunch meet attended by almost 50 editors of various publications and channels followed by a press conference choc-a-block with scribes (many of whom were attending a PC at the Taj for the first time after the Mumbai terror attacks). Ratan Tata spoke little, preferring to interact with journalists instead. In many ways, Tata seemed relieved to have gone ahead with the launch and fielded questions ranging from how he felt to whether he had another dream or if he was now considering retirement with his trademark charm. He said he was happy that, even though it was an interim measure, they were able to go the last mile and launch the cars in March. Another journalist from Kolkata asked Tata what he had to say to Mamata Banerjee now. With a big smile Tata responded, "The only thing I have to say to anyone at this point is Good Afternoon!" 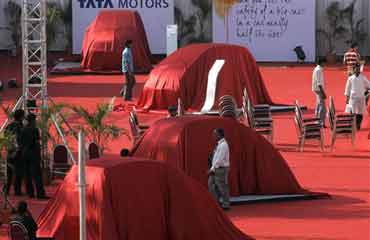 The whole day saw Tata reiterating what he has been saying all along in these last six years. Being able to achieve the impossible (with the emphasis on pointing out that there were many disbelievers), making a dream come true, and keeping the promises made, were statements that one heard through out the evening. At the formal launch event, held at the open Parsi Gymkhana grounds on Marine Drive in Mumbai, the entire Tata top brass was in attendance. Outside the event, the general public hung around, waiting for a chance to enter the venue to see the car.

People were seen standing on top of parapets, the Princess Street bridge, on top of nearby buildings trying to get a glimpse of the car. Security was in full measure with metal detectors, sniffer dogs and almost as many security guards as there were guests.

JJ Irani, Simone Tata, S Ramadorai, R K Krishnakumar, Ishaat Husain and Percy Siganporia apart from others were all there to support and be part of the celebrations. Also in attendance were other corporate heads, veteran Tata shareholders, vendors, dealers and financiers including SBI chairman O P Bhatt. A few vendors said they were still in the process of moving out of Singur and looking at formalising plans for setting up in Sanand. One vendor told Outlook that payments
to vendors had started taking place largely through bill discounting handled by SBI and a clutch of other banks. Former DGP A N Roy and Narain Karthikeyan (Tata has supported his racing career) were there as well.

Rediff, the agency handling the campaign, borrowed heavily from Barrack Obama's campaign 'Yes we can' to come up with the tagline 'Now you can' for the Nano.

Despite the scale of the arrangements, the celebrations were quite simple. An emotional Tata called the entire Tata Motors top management and design team to the stage once the cars were rolled out with the usual pomp and show, and dedicated the car to the youth of India as an example of being able to do what most countries felt could not be done. He added that the idea was never to create the cheapest car but create an all weather affordable transportation option for Indian
families. He then invited people to sit and experience the car at the venue (there were six cars placed around the grounds). Tata Motors' head Ravi Kant thanked the entire Taj team for their support before announcing the prices.

The base model, Bharat Stage II compliant will be priced at Rs 1,12,735 ex-showroom Pantnagar. Bookings will open on April 9 and continue till April 25. There will be price protection for the first one lakh people who are selected through the random lottery system, for everyone else the on-road price of the Nano will be much higher. The price ex--showroom Mumbai (doesn't include registration, taxes and insurance) for the top end version is Rs 1,85,375 while the ex showroom price in Delhi is Rs 1,72,360. Ravi Kant added that the price in Mumbai would be higher due to the logistics and distance from Pantnagar.

There is, however, a long road ahead. Many people pointed out the challenges in managing the demand and supply disparity and living up to customer expectations. Initially, with Pantnagar's annualised capacity of 50,000 cars meeting the demand for the Nano is going to be an uphill task. Tata Motors is already anticipating an overwhelming response so it remains to be seen how the team will manage picking customers fairly and making deliveries in time. It may have been a trying year for the Tata group, but March 23, 2009 is definitely a day the group would like to remember.