No One At The Wheel

Pakistan is not yet a failed state, but it is a state with a failed leadership. The only possible way out is for the US to exercise pressure on Musharraf to leave in grace. He is the main stumbling block in the way of a national consensus. 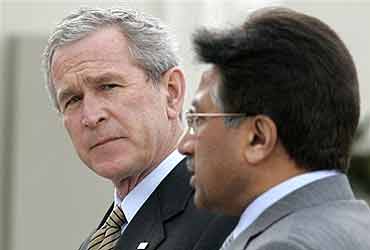 In a recent article (June 25, 2008), the Dawn of Karachi had described Pakistan as a bus full of drivers "with no one really at the steering and the bus lurching from one side to the other."

No driver has the courage and the confidence to take the steering in an attempt to bring the bus under control and no driver is prepared to let any other driver do so. It is a bus full of drivers, but with none driving.

On paper, Pervez Musharraf is still a powerful ruler. He is the President of the country, with unimpaired powers to dismiss the elected Prime Minister and the National Assembly. He is the Chairman of the National Security Council (NSC), which has the power to take decisions in all matters relating to national security. He is the Supreme Commander of the Armed forces, who has to approve all senior promotions and postings in the Armed Forces and whose orders on national security matters, including in matters relating to Pakistan’s nuclear arsenal, have to be carried out by the Armed Forces.

Despite all these powers on paper, he has been reduced to being a figurehead, who manages to survive in office not because the people and the National Assembly want him to continue, but because the US wants him to continue-- out of gratitude for what he had done for the US in the past and out of fear as to what could happen in the future if he is replaced by an unknown quantity not amenable to US pressure.

The political leadership would like him to go, but does not have the required numbers in the two Houses of the Parliament to make him go. The people had wanted him to go in the euphoria after the embarrassment inflicted on him in the elections of February 18, 2008, but the euphoria has since evaporated and the much-heralded Pakistan spring has proved to be short-lived. It hardly matters to them now as to who is the President and who is the Prime Minister. It will hardly make any difference to the nation and the people. So, they think.

Degraded, but not discarded, Musharraf has withdrawn into a shell. Only visiting US leaders and officials continue to take cognizance of his presence and keep meeting him for discussions. His own countrymen--except the leaders of the Pakistan Muslim League (Qaide Azam) created by him and the Muttahida Qaumi Movement (MQM) of Altaf Hussain-- avoid meeting him. Yousef Raza Gilani, the Prime Minister, rarely meets him and briefs him on the proceedings of the Cabinet and on the State of the nation. Musharraf has not convened a single meeting of the NSC to discuss the fight against terrorism because he is not confident that the civilian members of the NSC would attend it.

Only the Army continues to show him the respect that is his due in his capacity as the Supreme Commander of the Armed Forces and the former Chief of the Army Staff (COAS). Gen. Ashfaq Pervez Kayani, the COAS, is still loyal to him and keeps him briefed regularly, but he has turned out to be a weak and vacillating chief. Not as decisive as Musharraf was.

How strong a Pakistani COAS is depends on the respect commanded by him and the backing enjoyed by him from the US and his own soldiers. The US has been increasingly disenchanted by the performance of Kayani. He has proved himself to be lack-lustre and risk-averse. He has shown hardly any leadership or initiative in the fight against terrorism. He is not leading the fight from the front. Instead, he is merely doing what he is asked to do by the Cabinet after getting it endorsed by Musharraf. The perception of Kayani as a weak COAS has not endeared him to his subordinates.

Prime Minister Gilani is worse than a figurehead. Policy decisions are hardly ever taken in Cabinet meetings chaired by him in the Secretariat. They are taken in informal meetings of Ministers and officials chaired by Asif Ali Zardari, the co-Chairperson of the PPP, in his house if he is in the country or in his hotel suite if he is traveling abroad. Government is where Zardari is. He returned to Pakistan last week after an absence of a month traveling abroad. Sometimes, papers and officials were flown to him to seek his decision. Sometimes, decisions were just kept pending till he returned.

When Zardari is absent from the country, the real power is exercised by Rehman Malik, who is designated as the Adviser on Internal Security with the status of a Cabinet Minister. He is a former police officer, who was in the Federal Investigation Agency (FIA) during Benazir Bhutto’s second tenure as the Prime Minister (1993 to 1996). He emerged as the closest confidante of Zardari and the alleged handler of all his foreign bank accounts. He continues to enjoy Zardari’s trust despite his alleged failure to make effective security arrangements for Benazir.

Malik is accused by many in the PPP of playing havoc with the administration and with internal security management. He has been allegedly indulging in back channel talks with the Tehrik-e-Taliban Pakistan (TTP) without keeping either the COAS or the Government of the North-West Frontier Province (NWFP) informed. A major share of the responsibility for the deterioration in the situation in the tribal belt is attributed to him.

Zardari is a man increasingly worried about his security. He apprehends a threat to him not only from Al Qaeda and the TTP, but also from the remnants of Al Zulfiquar, formed by the late Murtaza Ali Bhutto, the younger brother of Benazir, to avenge the overthrow and the execution of their father Zulfiquar Ali Bhutto by Gen.Zia-ul-Haq. The remnants, who blame Zardari for the death of Murtaza at the hands of the Karachi Police in September 1996, have revived their sleeper cells to avenge the death of their leader. The recent explosions by unidentified elements in Karachi and the murder of a private security officer of Zardari at Karachi on July 22, 2008, are viewed by Police sources as warning signals to Zardari, who is seen as an usurper not only by the Bhutto clan, but also by many founding members of the PPP such as Mumtaz Ali Bhutto, the uncle of Murtaza, and Maqdoom Amin Fahim. Zardari, who is not confident of the loyalty of the intelligence and security agencies, has been spending more time in Dubai than in Pakistan. He is seeking to rule Pakistan from Dubai.

The political and public support for him is declining because of his image as devious. The PML of Nawaz Sharif, which is still a member of the ruling coalition though not of the Cabinet, is increasingly disenchanted with his evasiveness in matters relating to the reinstatement of the former Chief Justice Iftikhar Mohammad Chaudhury and other judges sacked by Musharraf in November last year and by his reluctance to break with Musharraf or the US. Zardari feels indebted to Musharraf and the US for the closure of the cases filed against him on various charges relating to corruption and the murder of Murtaza. It is only a question of time before the PML (N) breaks from the coalition. If that happens, fresh elections might become unavoidable in which the PPP is expected to do badly.

The publicly expressed US concerns over the increasing flow of foreign jihadis to Pakistan’s tribal belt and over the increase in infiltrations into Afghanistan from the FATA have stepped up the pressure on the Government either to act to stop this or face the risk of unilateral US action to stop this. Stepped-up action in the tribal belt either by the Pakistan Army or unilaterally by the US would lead to a fresh increase in terrorism in the non-tribal areas, which has come down since the Gilani Government came to office. A solution to this problem cannot be found without a consensus involving Musharraf, Gilani, Kayani, Zardari and Nawaz. Such a consensus does not seem likely in view of Nawaz’s anathema for Musharraf and the US.

Pakistan is not yet a failed state, but it is a state with a failed leadership. The only possible way out is for the US to exercise pressure on Musharraf to leave in grace. He is the main stumbling block in the way of a national consensus. Nawaz’s dislike for Musharraf is more than his dislike for the US. Once Musharraf is out of the way and Nawaz’s urge to avenge his humiliation by Musharraf in 1999 is satisfied, he may be amenable for a more co-operative policy with the US in the fight against terrorism.