Rejoice Or Sulk? The Big Bihar Dilemma Over Return Of Teeming Migrants

It remains to be seen whether the unprecedented situation arising out of the return of the thousands of migrants due to COVID-19 outbreak will spur the state government to go back to the drawing board and redraw its policies and priorities, writes Giridhar Jha. 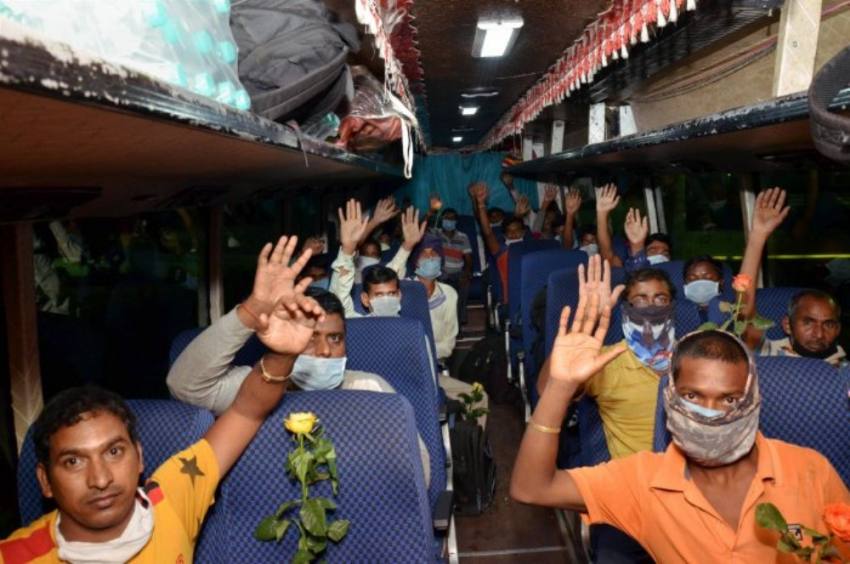 Migrants labourers board a bus to reach their native places after they arrive from Lingampally Station of Telangana. (PTI Photo)
Giridhar Jha 2020-05-08T13:30:17+05:30 Rejoice Or Sulk? The Big Bihar Dilemma Over Return Of Teeming Migrants 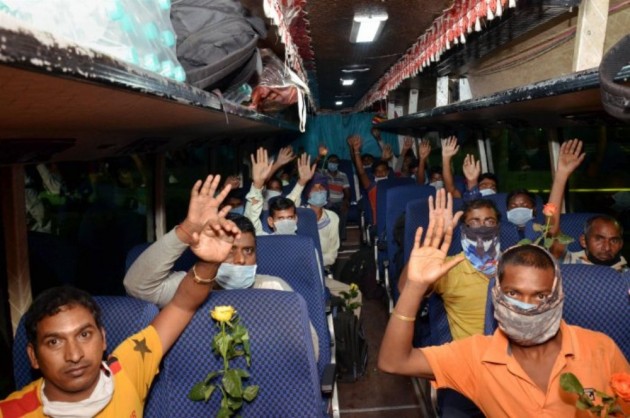 Bihar appears to be caught on the horns of a big dilemma -- being unsure of whether to rejoice or sulk over the return of its migrants. Even as thousands of dejected and distraught migrants are in the process of coming back, many others are already leaving for their respective places of work outside the state, within days after reaching their home state.

The Bihar government has, in fact, facilitated the return of a batch of 222 people from Khagaria district, working at a rice mill in Telangana, to enable them to go back to the southern state during the ongoing lockdown at the request of the K. Chandrashekar Rao government, which has apparently promised higher wages. It has made the developed states realise the power of Bihar’s workforce, says Bihar’s deputy chief minister Sushil Kumar Modi. “Construction work has resumed on a large scale in states like Maharashtra, Punjab, Gujarat and Karnataka and most of the migrant workers there have chosen to stay back on their own,” he adds.

Also Read: Migrant Worker, On Way Home From Delhi To Bihar On Bicycle, Dies In UP

Elsewhere, it has not stopped the teeming migrants from trooping back -- many of without any means of transportation -- into Bihar where an uncertain fate awaits them. A state perennially ravaged by floods and droughts, devoid of industries, and negligible employment opportunities for decades can hardly offer any beacon of hope, especially to the unskilled workers upon their return.

This is despite the fact that Bihar has had a well-meaning chief minister in Nitish Kumar whose tenure of 15 years has witnessed a jump from its negative growth rate to the double-digit growth figures. Nonetheless, even at such a pace, it will take Bihar a minimum of three to four decades to come anywhere close to the position where a state like Maharashtra, for example, is at in terms of progress today. Even though Bihar’s per capita income has gone up manifold in the past decade, it remains one of the poorest states in the country.

As per a conservative estimate, there are more than 30 lakh Bihari workers spread across the country, trying hard to eke out their livelihood in places far away from their ancestral villages. Only a small percentage of this workforce is likely to return home during the Coronavirus pandemic and very few of them will ultimately stay back, regardless of the inhuman treatment meted out to them in other states in recent days. But even that number would be too gigantic for the Bihar government to handle.

As of now, Nitish has instructed the officials of different departments to explore job opportunities for the home-bound migrants on the basis of their skills but it will be a herculean task for the state administration to provide ample means of livelihood to each of them, no matter how hard it tries.

Thankfully, the migrants do not appear to be coming back with a lot of hope, or so it seems. They are not oblivious of the fact that there are not enough of industries, or for that matter, small factories to provide regular employment opportunities even to a fraction of them. It is a bitter truth. Had there been such opportunities, why would they have left their ancestral place in the first place?

Over the past seven decades, Bihar has been devastated by recurring floods and droughts, at times both occurring at the same time in different parts. North Bihar, in particular, remains one of the poorest regions in the country despite its fertile lands. Successive governments, both at the Centre and in the state, have done precious little to create job opportunities by setting up agro-based industries in the area. All the attention of the policymakers was riveted only on the mineral-rich areas, until they too became part of a new state called Jharkhand after the division of Bihar in November 2000.

For years, unemployed youth from Bihar have had no option but to till the agriculture fields, owned by feudal landlords, either as share-croppers or as daily wagers in order to make both ends end. The situation in the 1990s worsened, as Bihar failed to reap the benefits of the post-liberalisation era. Bad roads, erratic electricity supply, lawlessness and, above all, lack of political will pushed Bihar further into the abyss of underdevelopment.

The scenario began to change a little with Nitish taking over the reins of the government. The condition of roads and power situation improved dramatically but industrialisation remained a distant dream. Though scores of proposals to set up industries came, only a few of them ultimately fructified. The dearth of employment opportunities, therefore, continued to force the youths to venture out of the state in search of livelihood year after year. And the situation has come to such a pass that none of them wants to stay back in Bihar now.

It remains to be seen whether the unprecedented situation arising out of the return of the thousands of migrants due to COVID-19 outbreak will spur the state government to go back to the drawing board and redraw its policies and priorities. Nobody likes to migrate to distant places and work under hazardous conditions to earn a livelihood but what can one do if they are no opportunities close to home to ensure two square meals a day.