The City of New York has asked the world leaders attending the upcoming 76th session of the UN General Assembly to show proofs of vaccination. 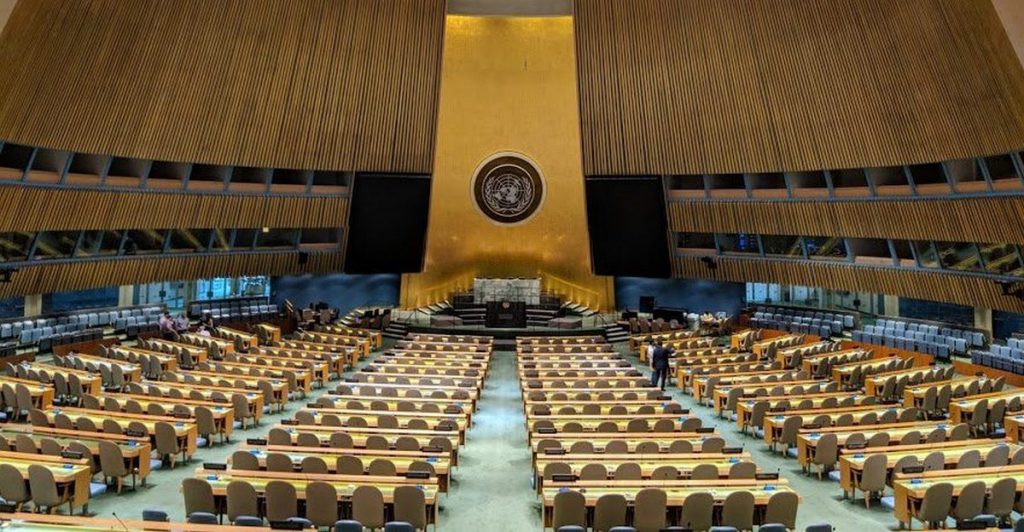 As world leaders begin to arrive in New York for the high-level UN General Assembly session, The City of New York said “all persons” entering the UNGA hall in the UN headquarters will be required to show proof of Covid-19 vaccination.

The condition was also supported by Assembly President Abdulla Shahid.
More than 100 Heads of State and Governments, as well as Foreign Ministers and diplomats, will participate in the annual General Debate, in person. The debate will start on September 21 and continue till September 27.

As the high-level UNGA week will return to a hybrid format after going virtual last year due to the raging COVID-19 pandemic, New York, the host city of the UN Headquarters, said that proof of vaccination against the coronavirus will be required for “all persons” to gain entry into the 193-member General Assembly Hall.

During the General Debate, only four delegates from a country, including the head of state or government, will be present in the General Assembly hall, and they will be required to show proof of vaccination.

In a letter to Shahid last week, New York City’s Commissioner for International Affairs Penny Abeywardena and New York City Health Commissioner Dave Chokshi said that in order to prevent the spread of COVID-19, the city has initiated a vaccination requirement for certain indoor activities, including at convention centres and the “UN General Assembly Hall qualifies as a convention centre".

Shahid, who took oath as President of the 76th session of the UN General Assembly Tuesday, supported this development.

“I strongly support this measure as an important step in our return to a fully-functional General Assembly - a measure which should allow a further increase in in-person meetings and negotiations this session. I stand ready to work with the Secretary-General to implement the proof of vaccination requirement as soon as possible,” Shahid, who is also the Foreign Minister of the Maldives, said in the letter.

In a joint statement, New York City Mayor Bill de Blasio and Abeywardena thanked Shahid “for taking the critical step of requiring proof of vaccination for those entering the UN General Assembly hall during next week’s High-Level convening.”

They said that as the city prepares for the High-Level week, “New York City stands ready to support our partners at the United Nations with testing and vaccine resources. To that end, the City will be opening a pop-up testing and vaccination site at UN headquarters next week and provide free COVID-19 tests, as well as the single-dose Johnson and Johnson vaccine.”

The city of New York will set up a vaccination tent outside the UN Headquarters during the General Assembly session.

Blasio and Abeywardena thanked the entire diplomatic community, who have been critical partners as New York City fought back the pandemic in the US.

“Our City is determined to defeat Covid-19. Over the last year and a half, we have launched numerous initiatives, including the Key to NYC, to save lives and signal to the world that vaccination is the best way to bring our city back. We are proud to join in the ongoing efforts to keep all UNGA attendees and our fellow New Yorkers safe during the pandemic.”

Responding to questions on the requirement for all entering the General Assembly hall to show proof of vaccination, Stephane Dujarric, Spokesman for the Secretary-General, said “We will, of course, work with the President’s Office and the member states on how to implement whatever decisions are taken by the Member States that regard delegates.

"For the part of the Secretariat, as we’ve said, all staff members that are public-facing, diplomat-facing, journalist-facing are required to be vaccinated,” he said and added that "all UN personnel are… have been asked to report their vaccination status.”

Dujarric said that the “point is this (UN) is a member state-led organisation. The Secretary-General does not have the authority to force delegates into one way or another.”

Shahid, while talking to UN reporters after taking the oath of office, was asked if delegations coming for the UNGA have informed him whether they are unvaccinated due to no access to vaccines in their countries or not.

“I have no answer to that question. That has not been shared with me how many are coming without vaccines but the host country has informed me that they will have the facilities to vaccinate all who are attending the General Assembly if they so desire. It will be facilitated.”

Prime Minister Narendra Modi and US President Joe Biden are among the world leaders who will address the UN General Debate in person next week.

However, concerns have been raised over the UNGA high-level week becoming a “super-spreader event” as delegations come from various parts of the world amid a still raging pandemic and low vaccination rates in many nations.

Last month, the US, host country of the UN headquarters, had urged heads of government and state and ministers to deliver their statements to the UN General Debate by video instead of travelling to New York to ensure that high-level week doesn’t become a “super-spreader event.”