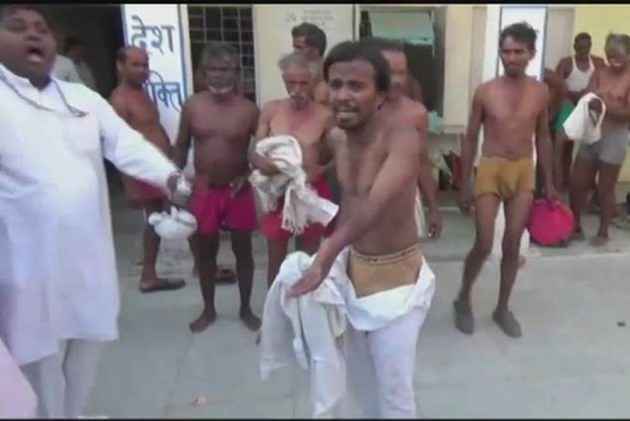 Opposition Congress today alleged that a group of farmers returning from a protest for declaring Tikamgarh as a drought-hit district were "detained, stripped and beaten up" by the police last evening, charges denied by the BJP government.

The Congress also accused the Madhya Pradesh government of suppressing the voice of farmers, even as Home Minister Bhupendra Singh asked the police chief to conduct an inquiry and file a report within three days.

The Congress had organised a farmers' protest outside the Tikamgarh collectorate seeking drought-hit status for the district, which received scanty rainfall this year.

Congress leader and former minister Yadvendra Singh said the police detained some of the protesters returning home, as well as some farmers just passing by and had nothing to do with the protest.

"They were kept at the Dehat police station, stripped and severely beaten up by the police," Singh alleged.

In Bhopal, however, state Home Minister Bhupendra Singh said, "No farmer was beaten up in the police station."

But, he added the government has taken such reports seriously and asked the Director General of Police to conduct an inquiry into the allegations of stripping and beating up of farmers and submit a report within three days.

"It is a matter of investigation if the farmers took off their clothes themselves or police did so," he told a press meet.

The Home Minister said Chief Minister Shivraj Singh Chouhan has taken a serious note of the matter and strict action would be taken against the erring officials, if they are found guilty in the inquiry report.

He also said the government was in the process of identifying drought-hit areas in the state, and the district collectors are conducting surveys in this regard.

Agrawal said he has seen images of farmers in the media related to the alleged incident, but it was a matter of investigation if they took off their clothes on their own or were stripped by the police.

Meanwhile, Dehat police station in-charge R P Chowdhary said he did not know who asked the farmers to be detained as he was on the field duty.

"By the time I reached (the police station) they had been released. I don't know if the farmers, who were around 25 in numbers, took off the clothes on their own or were stripped."

Police also said they have registered cases against around 1,000 unidentified persons in connection with the violence during the protest in Tikamgarh yesterday before the farmers were returning home.

Around 25 Congress workers were injured when they clashed with the police on the premises of the district collectorate.

The District Collector had said the police resorted to canecharge in self-defence after the Congress workers hurled stones and bottles at them. He said eight police personnel were also injured in the incident.

Chaturvedi quoted Scindia as saying the police canecharged and used tear gas shells at a peaceful protest staged by farmers and Congress workers.

"He said the state government is suppressing the voice of farmers, who were stripped and beaten in the police lock up. Nath said that Chouhan, who claimed to be the son of a farmer, has surpassed the Britishers in oppression against farmers," Chaturvedi said.