Modi's regional policy is responding to a changing geopolitical setting, which is making a hardline posture on Pakistan difficult to sustain. 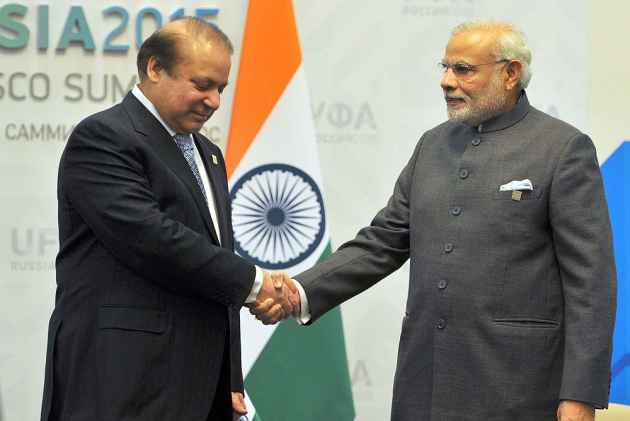 The urge to solve the Pakistan problem has been an abiding feature of Indian statecraft since its inception. Even the quintessential realpolitik of Indira Gandhi succumbed to the allure of a durable peace at Simla in 1972. Is Modi's latest effort merely another of a series of attempts to transform post-partition South Asia? Or is it a more contextual response to a changing geopolitical environment?

For starters, the absence of any ambitious composite style structure in the joint statement suggests Delhi is engaging Islamabad from a more cautious stance. Unlike in the 1990s, when Kashmir was placed at the heart of the rapprochement process, the current approach seems more focused on conflict management rather than a big bang solution. The kinds of interactions that are envisaged to follow from the Modi-Sharif détente suggest a mutual recognition to stabilise the LoC and the wider frontiers. While India has conceded that it is "prepared to discuss all outstanding issues", terrorism and border stability is the dominant theme of the joint statement. In this sense, the dialogue framework is an adapted and modest one to regulate the troubled relationship. A more interesting question is the timing of this limited détente.

Arguably, there are larger variables that have prompted Delhi to adapt its Pakistan policy. Changing alignments and foreign policies in Eurasia are altering the geopolitical environment around India. Ironically, it is Pakistan that is at the intersection point of several great power strategies. The most recent is China's big gamble in Pakistan as part of Beijing's "one belt-one road" strategy to connect Xinjiang with the Indian Ocean. The US has also reverted to its default policy of remaining deeply engaged with Pakistan despite abiding intra-alliance mistrust. Afghanistan, of course, is the immediate impetus for Washington's continuing investment in Rawalpindi. But it is also about retaining medium-term geopolitical leverage in southern Eurasia at a time when other regional powers are asserting their own interests and preferences.

Ironically, despite the image of Sino-American rivalry, Pakistan remains an area of agreement between US and China in that neither power is challenging the other's core interests in that area. Perhaps nothing exemplified this more than US and Chinese "observers" attending talks between an Afghan government delegation and a three-member Taliban team hosted in Pakistan recently. India's strategic community has reacted to these developments in a curious mix of blasé and disdain for China's new Pakistan push, and, trepidation regarding the consequences of Pakistan's renewed relevance to Beijing and Washington's calculus. The signals from Beijing are clear — there is no question of isolating Pakistan and siding with India. Delhi probably perceives that a modicum of India-Pakistan stability has some advantages, perhaps not dissimilar to the 2000s when intense Indo-US engagement shaped Delhi's cooperative Pakistan policy.

The second factor is India and Pakistan's full entry into the Shanghai Cooperation Organization. While the SCO essentially began as a Russia-China confidence-building measure to stabilise their interests in a post-Soviet Central Asia, the ensuing years saw both Eurasian powers managing their common periphery successfully. The near simultaneous recent shifts in Moscow and Beijing's geostrategies towards inner Asia have provided the impetus for SCO's next phase of development. Although the SCO remained on the sidelines during the US intervention phase in Afghanistan, the West's abject failure to nurture and establish Afghan state power and authority will leave a festering problem to this region. India, which free-rode on the US-led mission, is today in the unenviable position of having invested $2 billion worth of developmental assistance but without commensurate means to sustain its interests in Afghanistan.

It is too early to visualise what the SCO can attain on the western fringes of the subcontinent. China is the only member locked into a Pakistan-friendly position on Afghanistan. Russia and Central Asia are less sanguine about rehabilitating the Taliban but, for now, are disinclined to bear the burden of reversing Afghanistan's possible fragmentation. Neither is Russia willing or able to challenge the US and China-endorsed process of bridging Kabul and the Pakistan-assisted Taliban in a new political arrangement. Nevertheless, Russia has been the main sponsor for India's SCO membership hoping that accumulated strategic trust and a shared interest in managing China's rise in Eurasia will keep Moscow and Delhi engaged in SCO's evolution. Indeed, as a Russian study recently observed, "the Russia-India link will balance out the China-Pakistan link" making the SCO "more harmonious and balanced". Finally, should adverse scenarios emerge requiring a projection of power into Afghanistan, Russia is the only actor possessing vital forward military bases in Central Asia.

The SCO is a young regional organisation with unclear potential. Delhi has chosen to play its part in providing the optics of a civilised India-Pakistan image as it formally enters the organisation in 2016. But to imagine that new lines of communication and energy corridors are going to connect India and Eurasia – through Afghanistan and Pakistan — is to be strategically naïve. Iran, an observer and potential future SCO member, offers the only durable geopolitical option for India to project its own line of communication to Central Asia and beyond via the North South Transportation Corridor, as Modi alluded to during his SCO speech. Although still a minor player in inner Asia's affairs, India's SCO membership can help it influence the conversation on regional security and counter-terrorism.

Modi's regional policy is responding to a changing geopolitical setting, which is making a hardline posture on Pakistan difficult to sustain. Delhi is assessing the complex environment around it and reacting to new developments. At a sub-regional level, these have the potential to constrain India's traditional position and status, and, especially if India's internal transformation falters. But at a regional level, new multilateral structures are also opening new opportunities and roles for India, which if wielded wisely and correlated with internal strength can enable it to shape the evolving Eurasian community and preserve its position in the subcontinent. Pakistan is a structural challenge that should be realistically managed while India's cultivates a pro-active role in the changing political economy and geopolitical dynamics in the wider Eurasian region. Modi's policy cannot afford to be "more of the same".