Maldives Crisis: What Is Wrong With India?

Maldivians regret the knee-jerk reaction of the Indian strategic community and the media, which have neither the time nor interest in their nation and its people unless China or IS or both get a free mention. 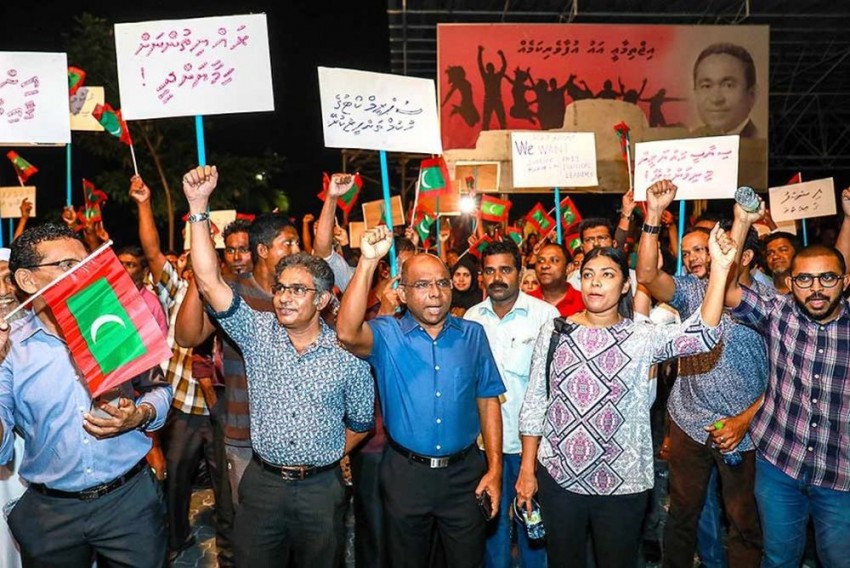 Maldivian opposition supporters shout slogans during a protest as they the urge the government to obey a Supreme Court order to release and retry political prisoners, including an ex-president in Male, Maldives.
File- AP Photo/ Mohamed Sharuhaan
N. Sathiya Moorthy 2018-02-09T11:20:16+05:30 Maldives Crisis: What Is Wrong With India? 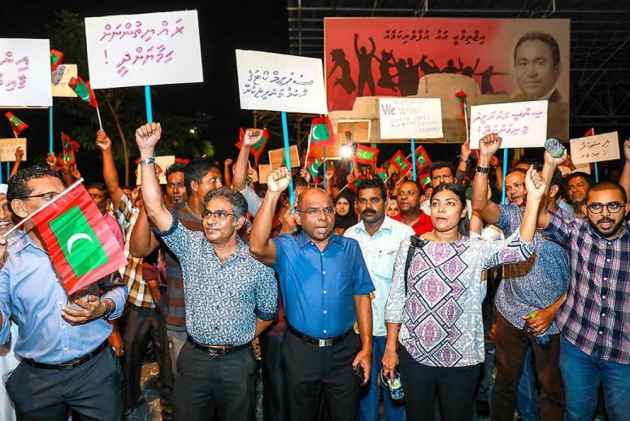 India’s cooperation with Maldives has been continual and problems, episodic. With a few alterations in details, over the past 40 years, the political opposition in that country had sought to convince the Indian Establishment that the rulers of Maldives -- Waheed Hassan Manik or now Abdulla Yameen -- were working against the interests of larger neighbour India, whom they would also say was the prime supporter/defender of their nation’s sovereignty, territorial integrity, and economic viability.

This time round, the ‘China factor’, coupled with India’s inability to build on Prime Minister Narendra Modi’s ‘Neighbourhood First’ policy, especially in the case of Maldives, is an added and a more immediate factor. In the bargain, India is also seen in the neighbourhood as compromising (on) its traditional stand of seeing them all as ‘India’s traditional sphere of influence’ and letting extra-regional players to wade through the immediate Indian Ocean waters. In their perception, India had preferences in the ‘extra-regional players’ that they could encourage, but in the name of sovereignty and even more immediate economic development assistance, China became a greater attraction for many of them. Maldives is not the only one, but is also not an exception.

India’s recent troubles with Maldives began with the ‘GMR imbroglio’, when a section of the Maldivian political establishment saw New Delhi as arguing the construction giant’s case(s) with their Government but not doing enough in facilitating a reciprocal concession from GMR for Maldives and the Maldivian people. Some even argued post facto that GMR has had an easy way with their Delhi and Hyderabad airport concessions nearer home, and had not done its ‘homework’ on Maldives, as Yameen too said in New Delhi, on his maiden overseas presidential visit to India, on New Year Day 2014.

There was/is also a perception that India looked the other way when then President Mohammed Nasheed bulldozed the GMR agreement through Parliament and later when he went on an arresting-spree with regard to adversarial political leaders, including Yameen, without citing justifiable reasons, and also then Criminal Court Chief Judge Abdulla Mohamad after the latter had ordered freedom for an Opposition leader of the time, President Yameen’s sacked and self-exiled Vice-President, Mohamad Jameel Ahmed. Instead, as some of them continue to claim, India ‘intervened’, and effectively so, when incumbent Waheed government brought Nasheed to book in the ‘Judge Abdulla case’ by getting the ongoing case delayed in the name of creating a ‘level-playing field’ in the 2013 presidential polls for the latter to contest, pending possible conviction and disqualification.

According to this view, Nasheed’s current woes too flow from the Yameen Government’s decision to reopen the pending case a year or so after the two had patched up in a way after the latter’s election, but only after the former’s Maldivian Democratic Party (MDP) took to the streets in December 2014, demanding the President’s immediate exit – and creating an Opposition alliance for Nasheed to return to power early on. Establishment Yameen was/is hurt that India did not do anything about it at all but felt hurt when the Government reopened the Judge Abdulla case, and given the vigorousness of the street-protests that the Nasheed camp prepared the nation for, changed an ordinary criminal case into a terrorism trial, and had the latter jailed for 13 long years and instant disqualification from contesting future elections for long.

The deep hurt in Maldivian Establishment going beyond the ruler of the day, be it under Nasheed, Waheed or Yameen, flows from their ‘flawed’ perception that India did not care to understand enough about their nation’s politics and ethos before going on to expect a particular and inconsistent way of politico-administrative behaviour from their political masters or the Opposition. This feeling was there but in a less expressive way when Gayoom was President for 30 long years, when India purportedly looked the other way to his ‘autocratic’ behaviour. The same, they ‘felt’, when Nasheed was in power,viz especially the GMR, Yameen / Judge Abdulla arrest, et al, and now under Yameen, too. Like the Americans, they say, India too seeks to only ‘manage’ the leadership of the day or toe the latter’s line excessively, but without seeking to understand the ruler’s difficulties or the genuine justification behind the Opposition’s cause at any given point in time.

In particular, Establishment Yameen was hurt when India unilaterally sought a visit by Prime Minister Modi to the Indian Ocean archipelago, as a part of his historic four-nation Indian Ocean neighbourhood trip in March 2015, but unilaterally dropped it, without even citing Maldivian ‘domestic situation’ flowing from Nasheed’s arrest and reopening of the long-pending trial in the ‘Judge Abdulla case’ as the cause. According to them, the Modi visit was not bilateral in the overall context, but was possibly an arrival statement for the Indian leader, elected Prime Minister with a massive mandate in May 2014, and a strategic statement of the Indian State, aimed at addressing its own China concerns. But when it came to unilateral cancellation, India’s purported democracy concerns for Maldives became the deciding-factor. So has been the perception when it came to the implementation of the omnibus Supreme Court order of  February 1, 2018, setting free Nasheed and eight other leaders, whom the Judiciary qualified as ‘political prisoners’, but against many of whom the very same court had upheld either the trial procedure, or conviction and sentencing, or all, at the appropriate stage. They also ask how the considered statement of India’s Ministry of External Affairs (MEA), urging Maldives ‘state institutions’ to enforce the Supreme Court order, did not refer to the ‘re-trial and re-investigation’ in the latter part of the same document, or ask other ‘stake-holders’ like Nasheed to cooperate in the enforcement of the same.

Most nations and Governments in India’s neighbourhood, including self-professed ‘friendly ones’ like Nasheed’s in Maldives, have distinguished between the developmental aspirations of their people and their own geo-strategic and internal security concerns. On external security, they all would not want extra-regional players, be it China, or the US, where successive Governments in India in the post-Cold War era, are ambivalent at best. They argue that India could not have its cake and eat it too. Having taken unilateral moves and decisions on regional security, centred near-exclusively on immediate concerns, without regional consultations or even advance information to any or all of them, India had only stoked their traditional fears and apprehensions viz the larger neighbour. It was the Soviet Union during the Cold War era, and now it is the US, and more recently the ‘Quad’, where none of them was invited, or even informed in advance. Such ‘secretiveness’ by choice on India’s side kicks up Cold War era concerns in individual nations and their Establishments, which once again begin talking about their own sovereignty, territorial integrity and ‘protecting our self-interests’. Even the best of ‘India lovers’ in the political Establishment, be it in the Government or the Opposition, have any convincing answer to give them, and try take them along a pro-India path, for long.

Otherwise, they all would accept investments from wherever they came, and under whatever terms that the investor insisted upon, as long as such investments could show up development before the eyes of their contemporary, aspirational generation, and (more) money in their hands. India has been slow on this front, and the Indian Establishment is seen as being slower in implementing the commitments in this regard, made by the political leadership. The experience, they say, is that unless their own political leadership takes it up with the Indian counterpart at the highest levels, and at every turn, nothing moves, nothing moves faster and continuously. As they also point out, most such nation do not have the kind of natural resources that the investor expect, so whatever they have they are ready to ‘pledge’. In the case of Maldives, from the days of President Gayoom, and possibly from the days immediately before him under predecessor Ibrahim Nasir, they had only islets to let off to willing investors, to build high-end resorts, but with long-term commitments on both sides in terms of lease-period, and also with freedom for the investor to repatriate profits in dollar-terms, unquestioned.

Yameen, they submit without much conviction, has only converted long-term lease-hold of such real estate to free-hold for the Chinese, but they argue that Nasheed too did something less (than) similar for GMR viz the Male international airport. It is a flawed argument as the GMR contract was for a much shorter period of 25 years, but then ‘anti-India’ sections in Maldives point out that their nation might never have the wherewithal but to extend the GMR contract when it became due, even if the Waheed-Yameen administrations had continued with the same. They also do not have answers as to how the Yameen Government found the $ 250 m (appx) that they had to pay GMR at the Singapore arbitration – a sticking point from the larger Indian concerns.

Independent of political affiliations and India-centric sentiments, a section of Maldivians regret the knee-jerk reaction of the Indian strategic community and the media, which have neither the time nor interest in their nation and its people unless China or IS or both get a free mention. Earlier, it used to be Pakistan and al-Qaeda, they argue. Even the concerns of these sections in India for Maldivian ‘democracy’ are concomitant to their contemporary interest in Chinese dominance or ‘IS presence’ in their county and according to their own perceptions of the day. Leave aside the Delhi visit of their leaders, other than that of their President of the day, which again gets only a brief media mention in some select national TV channels and an inside-page, four-column treatment in some newspapers, even India’s unprecedented efforts at rushing post-tsunami assistance in 2004, and massive quantities of potable/drinking water when capital Male was hit in December 2014, have not found adequate treatment in the Indian media, including the official Government media.

First under Prime Minister Manmohan Singh, and now even more under the Modi leadership, they say, this apathy and what some term as ‘selective amnesia’ of the Indian strategic community and media have been travelling upwards, to affect sections of the Indian Establishment, too. With the result, the Indian media, it is felt, does not get adequate and timely briefing on developments – the latest being the confusion over Yameen’s special envoy’s visit getting delayed owing to the non-availability of PM Modi and EAM Sushma Swaraj, and for genuine reasons, and not as rendered in newspaper columns, only to be preceded by unsubstantiated reportage of India putting its armed forces on ‘alert’ to tackle Maldivian developments – both of them sending out wrong signals to Maldivian people, who pick up their news also from Indian TV channels beamed in their island-homes.

US Govt To Shut Down Again