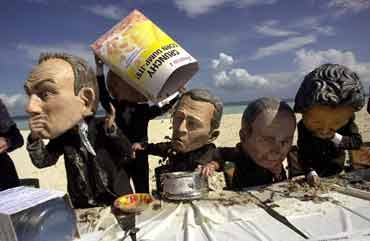 WASHINGTON: On September 10, trade officials from almost 150 nations will travel to Cancun, Mexico. Despite the many pleasures of Cancun, these negotiators will probably not enjoy their stay. They will spend the next four days trying to negotiate new rules to govern trade in agriculture and services, as well as other sectors not yet fully covered by the WTO.

This round of trade talks is supposed to meet the needs of developing countries. Policymakers finally acknowledged that despite eight earlier rounds, these nations still encounter many protectionist barriers to their exports.

However, agriculture, services and development are not the only issues on the negotiators' plates. They will also decide whether or not to negotiate rules governing international investment within the framework of the WTO. It will be a difficult decision to make. While international investment rules make economic sense, these same rules may not make political sense.

There are a wide range of reasons why policymakers should not load investment agreements onto the agenda of the WTO. While the past is not an indication of the future, we must learn from past efforts. In the three earlier attempts (the International Trade Organization-1948-1950, under the aegis of the UN, 1972-1992, and the Multilateral Agreement on Investment, the MAI, at the OECD-1995-1997), policymakers were never able to agree even on the objective for such negotiations. In each instance, capital -exporting nations wanted rules to govern entry and post-entry conditions. On the other hand, capital-importing countries wanted obligations that would bind foreign investors as well as investment rules that would help these nations meet their development objectives. These earlier attempts were troubled enough, and they involved far fewer nations then the 146 that comprise the WTO today.

International investment has flourished without an international system of rules. Developed and developing countries alike rely on bilateral investment treaties called BITs. Today there are over 2000 of these BITs, which are mainly agreements between developed and developing countries. Generally, the BITs define foreign investment broadly, require that host states treat private foreign investment fairly and equitably, and require equal treatment of foreign and domestic investment. Many BITs limit expropriation and guarantee fair compensation should expropriation occur. BITs also give investors the right to transfer funds in and out of host countries using market exchange rates. Finally, they provide for state-to-state and sometimes investor-state dispute settlement.

Each country can tailor its BITs to provide the level of investment protection it wants, and it isn't tied to other countries' preferences as would happen in a multilateral agreement. Moreover, BITS allow nations to ensure that certain sectors and development objectives are protected and national laws, regulations, and practices. Thus, the US can ensure that foreigners don't control its defense industry, France can ensure that its culture remains uniquely French rather then a mirror image of the US, and smaller countries have leverage when negotiating against bigger, richer nations.

But despite the growing number and successful track record of such BITs, some policymakers and business leaders still believe that the world needs an international system of investment rules within the international trade regime. They stress that because trade and investment are linked in the real world, the system of rules that governs trade must also govern investment. And they argue that the WTO is the right place for these rules, because it already includes investment agreements negotiated during the Uruguay Round of the GATT from 1986-1993. One such agreement prohibits trade related investment measures, such as local content requirements. Moreover, the General Agreement on Trade in Services includes rules governing foreign investment in services. Yet each of these investment agreements is designed to do one thing, to ensure that trade is promoted. They are not designed to govern international investment per se.

In 1996, under pressure from Japan and several European nations, members of the WTO agreed at the Singapore Ministerial to undertake exploratory and analytical work on investment. But many developing countries also insisted that the members of the WTO must first decide by "explicit consensus" whether or not to include investment and then decide when such negotiations should begin. Explicit consensus is a term that has no meaning for WTO members. Not surprisingly, when WTO members again met in 2001 in Doha, Qatar, they provided no guidance on what negotiators should do if they could not find a consensus on the scope and timetable of such negotiations.

Despite this clear ambivalence, WTO staff, guided by WTO members, began to examine the relationship between investment and trade. A working group focused on a few key issues, but they achieved little progress. Members couldn't even agree on the scope of potential investment negotiation - should it focus simply on investment that expands trade or also on portfolio investment, which is less stable?

Portfolio investment differs from direct investment in that investors don't have lasting control over a business enterprise. A controlling investment is usually viewed as 10% of an investment. In the months that followed, India presented a paper that said developing countries needed policy flexibility to determine what type of investments would be in the national interest. Switzerland and Canada concurred with India's position, revealing that there would be unusual alliances should actual investment negotiations proceed.

In a discussion paper presented to the WTO in April 2002, the EC argued that any investment agreement must cover both portfolio and direct investment. Some five months later, the US adopted a similar position. But the US business community, a pressure group whose support would be essential, did not enthusiastically support this position.

However, the lack of consensus on the definition of investment was not the only contentious issue jeopardizing agreement on whether and when to negotiate international investment. In December 2002, India, China, and several other developing countries submitted a paper demanding that any international investment agreement delineate not just the rights of investors and the rights of states, but also the responsibilities of investors. They also argued that foreign investors should be required to undertake obligations that meet the host countries' interests, development policies, and objectives. Just this week developing countries made it clear that they opposed such negotiations. Given that this round is supposed to be the "development round" these concerns should have great influence.

Investment rules are not central to WTO's mission. The challenge for the organization is to promote trade and to help manage trade relations between its 146 members. That difficult task can be better handled without getting bogged down in a rancorous investment treaty.

Susan Ariel Aaronson is Senior Fellow and Director of Globalization Studies at Kenan Institute in Washington, Kenan Flagler Business School. She is writing a history of international investment agreements for University of Michigan Press. Rights:
© 2003 Yale Center for the Study of Globalization

Down Under Goes Down