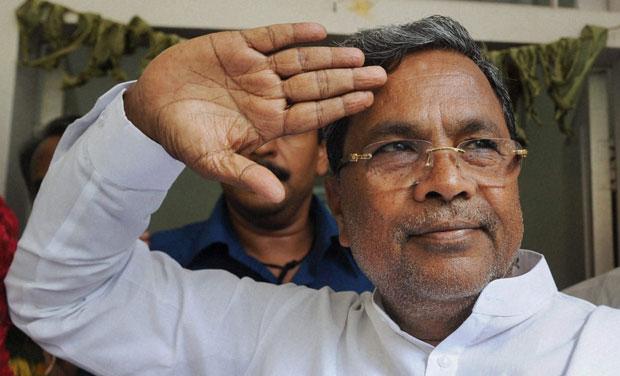 Raising apprehensions that Electronic Voting Machines (EVMs) could be tampered with, Karnataka Chief Minister Siddaramaiah on Friday demanded that ballot papers be used during the upcoming assembly polls in the state.

The chief minister also ruled out any impact of Gujarat poll results on Karnataka, saying the issues in the state were different.

Siddaramaiah said he had spoken to some experts and there were chances that the EVMs could be tampered with.

"They (BJP) have the power. The Election Commission is under them. Though it is an independent constitutional body, they (central government) appoint the chief election commissioner," he said to a query about allegations of EVM tampering.

Speaking to reporters at Raichur in north Karnataka, he said, "What we are saying is go to the old (ballot paper) system, what is the difficulty?"

Apprehension about possible EVM tampering through  bluetooth technology was raised by the opposition Congress during the recent assembly elections in Gujarat, which the Election Commission had termed "baseless".

Similar doubts about the credibility of EVMs were raised during recently concluded civic polls in Uttar Pradesh and assembly elections earlier this year.

Pointing out that the demand for the old system was raised during the Uttar Pradesh assembly polls by political leaders there, Siddaramaiah said, "Go to the ballot paper. What is the problem with it?"

Several countries have gone back from EVM to ballot  papers, he said and demanded that ballot papers be used during the assembly polls in the state, due early next year.

"We will both meet and write to the Election Commission on this. We demand that elections in Karnataka be conducted using ballot papers," he added.

On possible impact of Gujarat poll results on Karnataka, he said, "Results of any state will not have any impact on the  results of another state....Issues there are different from our state. So there is no relation to one another. So it cannot be said."

Asked about the exit polls predicting a win for the BJP in Gujarat and Himachal Pradesh, Siddaramaiah said the counting is yet to happen, adding, "this are just exit polls."

"There are various instances where exit polls have gone wrong. Let's see what happens on December 18," he said.