ICAN-- a coalition of non-governmental organisations (NGOs) from around 100 different countries around the globe-- is working for prohibition of nuclear weapons. 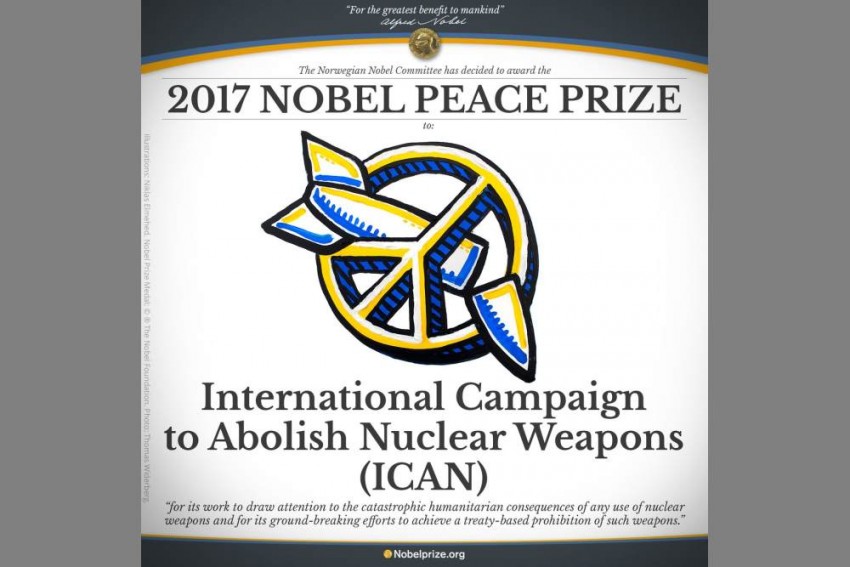 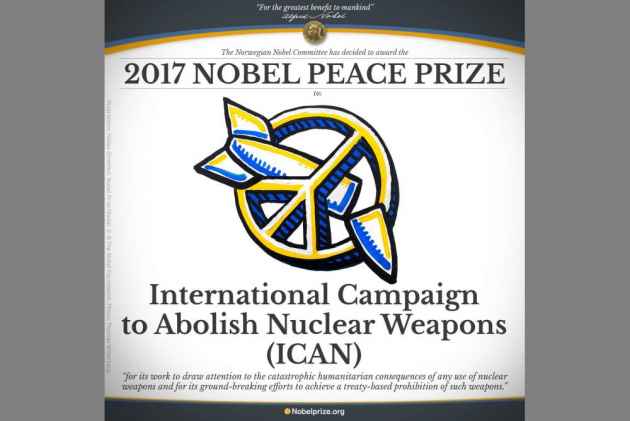 The Nobel Peace Prize for the year 2017 was on Friday awarded to the International Campaign to Abolish Nuclear Weapons (ICAN)-- a coalition of non-governmental organisations (NGOs) from around 100 different countries around the globe-- thats working for prohibition of nuclear weapons.

The organization received the award for its work "to draw attention to the catastrophic humanitarian consequences of any use of nuclear weapons and for its ground-breaking efforts to achieve a treaty-based prohibition of such weapons".

"Through its work, ICAN has helped to fill this legal gap," said the Norwegian Nobel Committee in press release announcing the award.

"ICAN is a coalition of non-governmental organizations from around 100 different countries around the globe. The coalition has been a driving force in prevailing upon the world’s nations to pledge to cooperate with all relevant stakeholders in efforts to stigmatise, prohibit and eliminate nuclear weapons. To date, 108 states have made such a commitment, known as the Humanitarian Pledge."

The Geneva-based ICAN won the USD 1.1 million prize because it "has been a driving force in prevailing upon the world's nations to pledge to cooperate ... In efforts to stigmatise, prohibit and eliminate nuclear weapons," Norwegian Nobel Committee chairwoman Berit Reiss-Andersen said in the announcement.

The prize "sends a message to all nuclear-armed states and all states that continue to rely on nuclear weapons for security that it is unacceptable behaviour. We will not support it, we will not make excuses for it, we can't threaten to indiscriminately slaughter hundreds of thousands of civilians in the name of security. That's not how you build security," ICAN executive director Beatrice Fihn told reporters in Geneva.

She said that she "worried that it was a prank" after getting a phone call just minutes before the official Peace Prize announcement was made. Fihn said she didn't believe it until she heard the name of the group proclaimed on television.

"We are trying to send very strong signals to all states with nuclear arms, nuclear-armed states, North Korea, US, Russia, China, France, UK, Israel, all of them, India, Pakistan, it is unacceptable to threaten to kill civilians," she said.

The prize comes amid heightened tensions over both North Korea's aggressive development of nuclear weapons and President Donald Trump's persistent criticism of the deal to curb Iran's nuclear programme.

"The panel wants to send a signal to North Korea and the US that they need to go into negotiations. The prize is also coded support to the Iran nuclear deal. I think this was wise because recognising the Iran deal itself could have been seen as giving support to the Iranian state," Oeivind Stenersen, a historian of the peace prize, told The Associated Press.

Reiss-Andersen noted that similar prohibitions have been reached on chemical and biological weapons, land mines and cluster munitions.

"Nuclear weapons are even more destructive, but have not yet been made the object of a similar international legal prohibition," she said.

Reiss-Andersen said "through its inspiring and innovative support for the UN negotiations on a treaty banning nuclear weapons, ICAN has played a major part in bringing about what in our day and age is equivalent to an international peace congress."

Asked by journalists whether the prize was essentially symbolic, given that no international measures against nuclear weapons have been reached, Reiss-Andersen said "What will not have an impact is being passive.