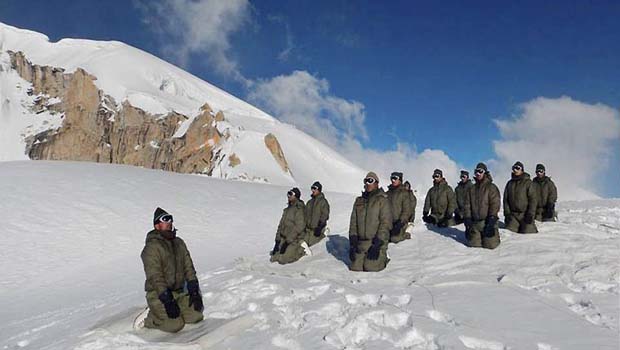 The army is giving final touches to a long-pending project to manufacture specialised clothing, sleeping kits and key equipment for its soldiers deployed in the Siachen glacier - the world's most dangerous battlefield.

India spends around Rs 800 crore annually in import of Extreme Cold Weather Clothing System (ECWCS) and mountaineering kits for soldiers guarding the glacier at the heights ranging from 16,000 feet to 20,000 feet, according to official data.

Military sources said the army is aiming at saving nearly Rs 300 crore annually by indigenous production of these items which are, at present, sourced from countries like the US, Australia, Canada and Switzerland.

"We have almost finalised the project under which a large number of items required for troops deployed in Siachen Glacier will be manufactured in India through involvement of the private sector," said a source.

Some of the clothing gear, to be manufactured in India, will also be supplied to army personnel deployed in high-altitude locations like Doklam along the treacherous Sino-India border, it said.

The Siachen Glacier in the Karakorum range is known as the highest militarised zone in the world where the soldiers have to battle frostbite and high winds. Avalanches and landslides are common at the glacier during the winter and temperatures can drop to as low as minus 60 degrees Celsius.

According to official figure, the army lost 163 personnel deployed at the glacier, the worlds highest battlefield, during the last 10 years.

India and Pakistan started deploying troops at the strategically key glacier in 1984.

The sources said a number of foreign companies have also shown interest in co-production of ECWCS and high-altitude equipment along with Indian firms.

The Army first mooted the idea of indigenous production of the high-altitude clothing and equipment around 10 years ago.