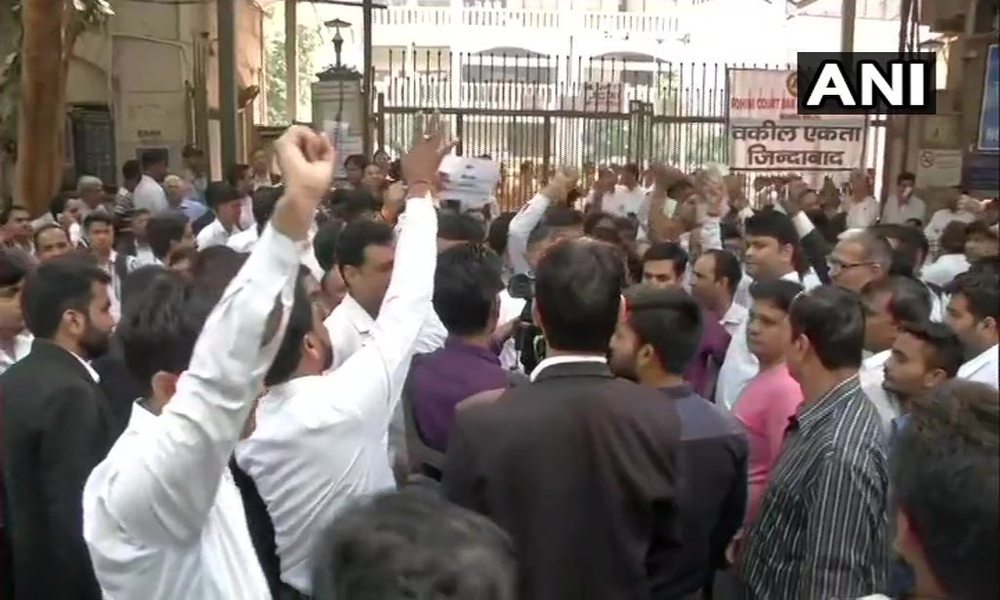 The Bar Council of India on Wednesday announced that it will withdraw its strike and resume work from Thursday but demanded the arrest of the cops involved in the scuffle at Tis Hazari court within a week. It also promising action against lawyers found guilty in the clashes.

Hundreds of lawyers gathered outside district courts in Rohini and Saket, a day after Delhi Police personnel laid an 11-hour siege outside the Police Headquarters.

Chairman of the Bar Council, Manan Kumar Mishra, said they will not tolerate any incident of violence involving lawyers, police and public. He added it was unjustified that police lodged two FIRs against lawyers and demanded the arrest of the policemen involved in Tis Hazari clashes,

About the attack on a police officer outside Saket court, Mishra said: "I assure the public that requisite action will be taken against lawyers involved in incidents of violence."

The Bar Council also demanded the arrest of police personnel who were involved in the clashes with the lawyers at Tis Hazari court complex and sought constitution of a high-level committee to probe the "illegal" protest carried out by the police yesterday.

The apex body said that the police protest was "well planned" and was done to threaten not only the lawyers but the government and judiciary.

"The demands of the policeman that they shall withdraw from the security of the judges and even of the judicial officers is very disturbing for a democratic country like India," the Bar Council's statement said.

Further, Mishra accused police personnel of making provocative statements against judges and lawyers during their protest on Tuesday.

TV visuals showed a man standing on top of the high-rise court building in Rohini in an apparent suicide bid.

As lawyers raised slogans, litigants could be seen standing outside the gates of the courts, waiting to enter but not being allowed to do so.

On Tuesday, the chairman of the coordination committee of All Bar Associations in Delhi had said lawyers would continue to boycott work on Wednesday, notwithstanding a Bar Council of India appeal to end their strike.

Mahavir Sharma, the chairman of the coordination committee, condemned Tuesday's protest by thousands of police personnel against the alleged attack by lawyers on them and said the strike will continue till the "guilty officers" were arrested.

"The strike will continue till justice is met. Litigants will be given easy access to court but lawyers would not be appearing in hearings. Police personnel be present at courts premises tomorrow; we do not have any problem with that.

"Despite the Delhi police being a disciplined force, they held such strong protest today. It was done to divert the attention from the actual culprits and to save their seniors who were at fault," he said.

Police protests were triggered by two attacks on their colleagues, one on Monday outside Saket District Court and another on Saturday at the Tis Hazari Courts Complex after a parking dispute between an on-duty policeman and a lawyer which led to at least 20 security personnel and several advocates being injured.

Two FIRs were registered against unidentified persons, who were seen in a video hitting a uniformed policeman on a motorcycle with his elbow and slapping him outside the Saket court.