Experts say that it is rare to spot a dolphin in India. However, during the ongoing lockdown, many reports have come across in which locals claimed that they sighted dolphins at various places at the bank of river Ganga. 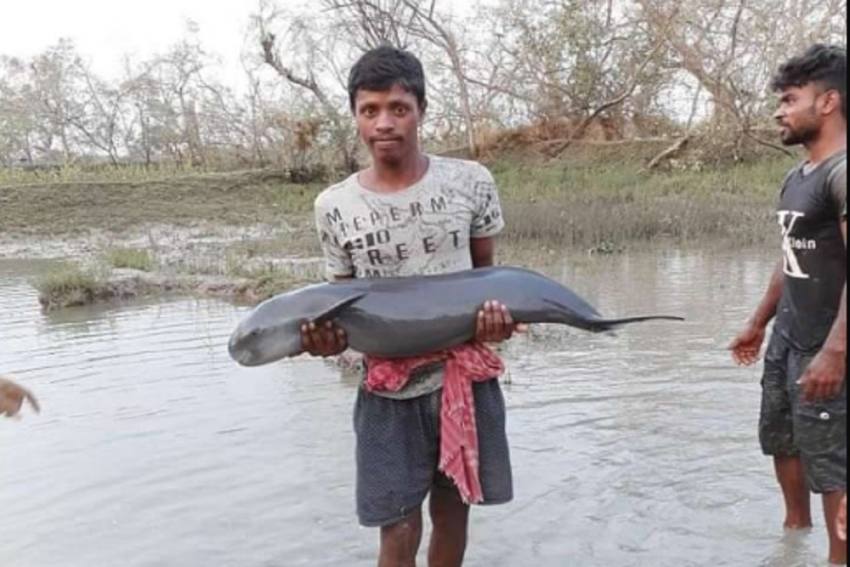 A volunteer trained by the Wildlife Institute of India rescues a Dolphin which had washed ashore a village in West Bengal's South 24 Parganas district.
Jeevan Prakash Sharma May 29, 2020 00:00 IST In Rare Incident, Youth Rescues Dolphin Washed Ashore Village In Bengal 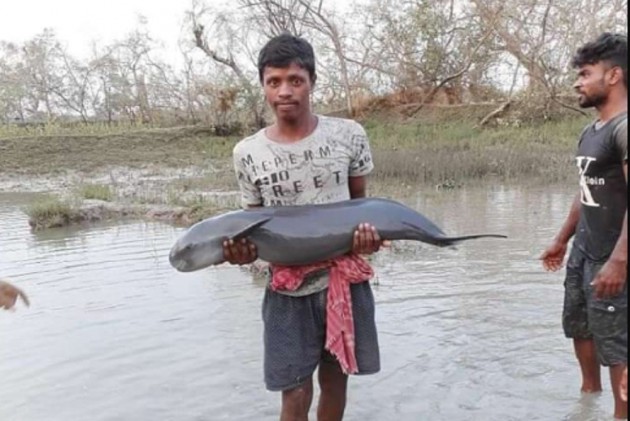 In a rare incident, local youth from a village in South 24 Parganas district of West Bengal rescued an Irrawaddy dolphin, which had washed ashore due to high tide. He carried the mammal up to the shore and immediately released it back into the water.

The youth was a community volunteer trained by the Wildlife Institute of India under Centre’s National Mission for Clean Ganga (NMCG).

NMCG officials said that the dolphin looked fine and did not show any sign of injury.

“We have trained over 1,300 such volunteers, called “Ganga Praharis”, to contribute to the conservation of aquatic life and rejuvenation of the Ganga. In case of any injury, the youth would have immediately taken the dolphin to our rehabilitation centre for the treatment,” an NMCG official said.

Irrawaddy dolphins make their habitats in estuarine zones where fresh river water meets the ocean. They are found near Chilika lake in Odisha and the coastal area of Bay of Bengal, including Sunderbans in India.

Experts say that it is rare to spot a dolphin in India. However, during the ongoing lockdown, many reports have come across in which locals claimed that they sighted dolphins at various places at the bank of river Ganga. It is the only river in the country where dolphins inhabit at present.

Dr Sandeep Behera, a biodiversity expert, says that sighting of a dolphin could be possible during the lockdown as river dolphins are quite shy in nature, unlike marine dolphins.

While marine dolphins are friendly with humans, both river and estuarine dolphin prefer quiet and isolated environment. They don’t live in groups and try and settle at those places where there is no human interference.

“During the lockdown, human intervention has been completely negligible in the river. The quietness at the bank of the river might have allured them to come there,” Behera said.

He said that since this national aquatic animal reproduces once in two years, their sudden spotting doesn’t reflect the increase in their population.

According to government claims, the Ganga has over 2,500 dolphins across its entire stretch, but due to dams and barrages, their movement is restricted.

One can find a good number of dolphins in the 82 km upper stretch of Ganga from Kalagarh Dam (Bijnor) to Narora barrage. Narora to Farrukhabad in Uttar Pradesh is another stretch where dolphin sightings have improved of late.

Ahead of Farrukhabad, till West Bengal is the last stretch where dolphins were rarely sighted earlier. However, during the lockdown, many people claimed to have spotted dolphins on the bank of Hubli river.

Rajiv Ranjan Mishra, Director General, NMCG, expresses satisfaction over the news of increased spotting of dolphins. He says that government has made various efforts to improve the water quality and reduce river pollution in the last few years, which has resulted in an increase in the population of aquatic animals.