Why Ashok Gehlot And Sachin Pilot Factions Patched Up In Rajasthan

The answer, perhaps, lies in the fact that Sachin Pilot exercises considerable influence among voters in at least three of the four constituencies where bypolls are scheduled to be held 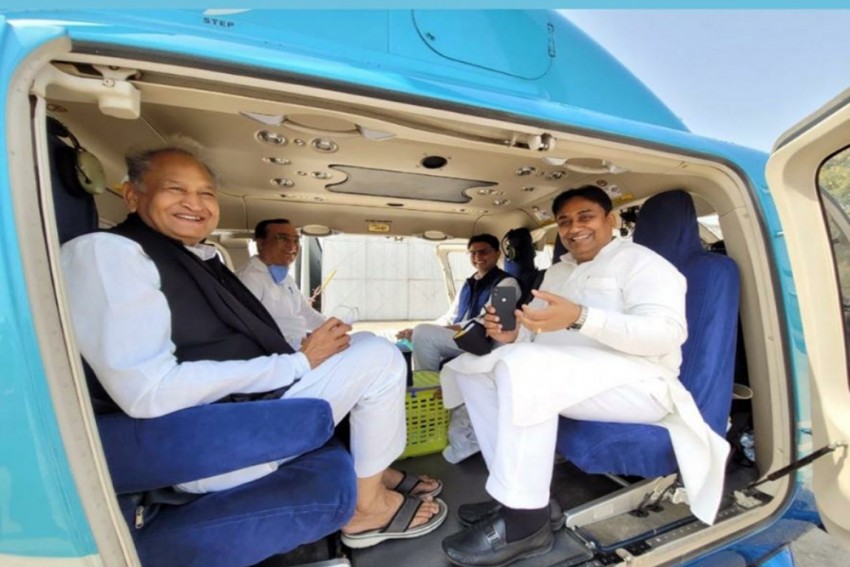 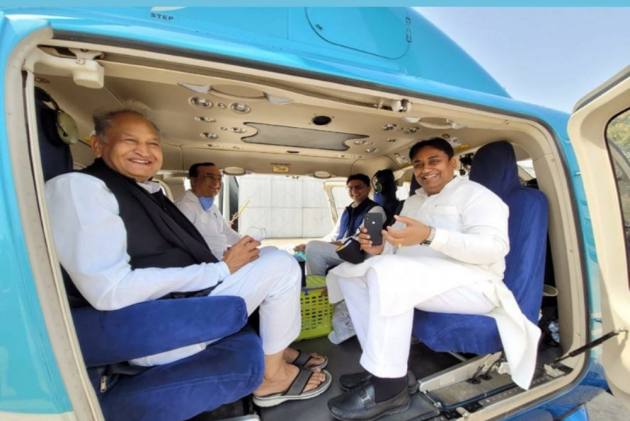 While Rajasthan Chief Minister Ashok Gehlot may have called his former deputy CM Sachin Pilot, a “nincompoop” just a few months ago, there seems to be an unanticipated truce brewing between the two leaders. The duo has been addressing rallies together, posing for photo-ops and the two have been equally scathing in their criticism of the BJP regarding the Centre’s three new agriculture legislations.

To put things into perspective, the two addressed back-to-back rallies in Rajasthan's Bikaner and Chittorgarh districts on Saturday and even shared a helicopter ride, after a gap of almost one year.

It is also noteworthy, that the tussle between the two was evident until a fortnight ago, when Pilot was not allowed to speak during a public event which was attended by former party chief Rahul Gandhi.

Prior to that, a ‘kisan mahapanchayat’, organised by Pilot’s supporters in eastern Rajasthan didn’t go down well with the Gehlot faction.

So why are the two leaders presenting a united front, these days?

The answer, perhaps, lies in the upcoming state bypolls, where Pilot exercises considerable influence among voters in at least three of the four constituencies.

For instance, in Udaipur's Vallabhnagar, the election has been necessitated after the death of Congress MLA Gajendra Singh Shaktawat, who was a staunch Pilot supporter. It will be difficult for the Congress, which is considering to field Shaktawat's wife, to win the seat without the support of Pilot.

Meanwhile, in Bhilwara's Sahada constituency, the Gujjar community, to which Pilot belongs, makes up a huge chunk of the electorate. Pilot’s support can turn the tide in favour of the Congress party in Sahada, as well.

Rajsamand, the third constituency that’s going to polls, is considered as a BJP stronghold. If the Saffron party decides to field the daughter of deceased MLA Kiran Maheshwari, who was its tallest leader from the region, it could reduce the Congress' chances of winning.

Known as a stronghold of Assembly speaker CP Joshi, the Congress had fielded a protégé of the leader during the 2019 Lok Sabha elections, who was also a Gujjar. Even though Ram Narain Gujjar lost the election by a large margin, his candidature showed that the Gujjar community is an influential factor in Rajsamand as well and hence Pilot will be expected to campaign for the Congress, there.

And while the Sujjangarh constituency in Churu district, may not have a prominent Gujjar presence, the Congress cannot ignore the fact that its former MLA Master Bhanwar Lal Meghwal shared close ties with Pilot and since the party is planning to field Meghwal's son, Pilot will have to be included in the picture.

"Congress wants to present a united front ahead of the polls. What the Congress cannot ignore is the presence of the Gujjar community in three of the four constituencies that are heading for bypolls. Most of the community favours Pilot. Hence, if Congress wants to emerge victorious, the party cannot ignore him. Another favourable issue that will ensure Congress' good performance in these four seats is the farmer’s protests. The party has been critical about the Centre’s new farm laws and it has been trying to milk the most out of the crisis,” senior political analyst Om Saini told Outlook.

Furthermore, according to sources within the party, the high command has instructed the two factions to stay united.

The helicopter picture in which four leaders-- Sachin Pilot, Ashok Gehlot, pradesh Congress committee (PCC) chief Govind Dotasara and state in-charge Ajay Maken shared a frame was thus a photo-op to send out a message of unity to the party men and the Opposition.

“During Rahul Gandhi’s visit to Rajasthan on February 12 and 13, Dotasra, was given preference over Pilot. But now looking at the voter dynamics, the party has realized that it cannot side-line Pilot”, a senior Congress leader told Outlook.

The bypolls will be held in Sujangarh (Churu), Sahara (Bhilwara), Vallabhnagar (Udaipur) and Rajsamand. The polls have been necessitated after the demise of the four sitting during the last few months. Three of these seats belonged to the Congress, while the Rajsamand constituency was represented by BJP leader Kiran Maheshwari. The dates for the bypolls have not been announced yet.