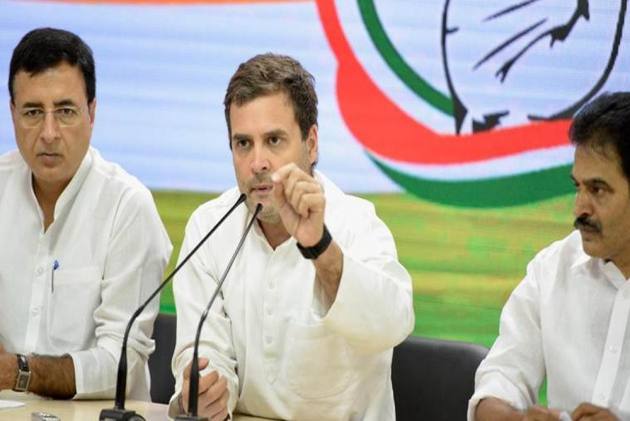 He said the manifesto, being prepared after extensive nationwide consultations with key stakeholders, will reflect the people's voice and not just one man's views, an apparent reference to Prime Minister Narendra Modi.

In an exclusive interview to PTI, the 48-year-old Congress chief said the Congress-led UPA is storming back to power as people have rejected Modi's politics of "false promises".

"We want India's voice and aspirations to prosper. We don't believe in one man's voice. We believe in everyone's voice and choices. It requires tremendous discipline and hard work to do, but it works," he said.

Congress is set to release its manifesto next week, ahead of the first phase of polling on April 11.

Without divulging specific details of the manifesto, Gandhi said it will have a well-thought out "strategic plan" for creation of jobs on a "huge scale" and a roadmap for transformation of the agriculture sector, besides ways to boost small businesses and the economy at large.

Besides promoting entrepreneurship and industry, Congress will also free businesses from the onslaught of "tax terrorism" besides ensuring fairness to small and medium traders, he said.

The Congress chief also said his party intends to significantly increase public investment in the education and health sectors which will help provide better facilities for the common person.

"Our manifesto has a commitment to increasing the expenditure on education and creating a high quality public education system. There is a tremendous amount of work that has gone into preparing our manifesto," he said.

"All this is ground breaking stuff. So yes, while the BJP's failures and Modiji's false promises and incompetence are certainly election issues, we have more than enough to share when it comes to our plans and our vision for India," he said.

Reflecting on his party's poor performance in the 2014 Lok Sabha poll when it just got 44 seats, Gandhi said it was an "aberration", asserting that the Congress is storming back to power.

"The Congress at one level is an organisation, but at another level, the Congress is a conversation."

He said the Congress party after 2014 had got down to brass tacks - to rework, rebuild and resurrect the organisation as a whole and it was initiated by decentralising power.

The party, through effective state leadership, reconnected with workers down to the booth level, he said, adding that it has been a priority and it has been successful as evidenced in the outcome of the recent state elections.

Gandhi said the Congress across India is naturally building up and strengthening, because the "more the RSS-BJP try to suppress the conversation, the more India wants to converse, think and grow".

"The Congress builds and grows in India when the conversation builds," said Gandhi.

Accusing Modi and the BJP/RSS of "imposing" their views on people, he said the Congress is not in the business of imposing ideas as it wants to listen and work together with all the stakeholders of this country.

"The RSS-BJP will say only one person speaks for India. It's impossible. As Congress president, I say with great humility that Congress will grow even more when it permits multiple different voices," he said.

Referring to the ambitious 'Nyay (Nyuntam Aay Yojna)' announced by him earlier this week, Gandhi claimed it threw the BJP into disarray.

"It's not my scheme; it's a scheme that has been created after listening to lakhs of people in our manifesto conversations," he said.

Gandhi said answers would come by talking to people on the street, as "we're just replicating their voice".

The Congress chief said a lot of farmers came to the party and asked for building infrastructure to help them put up a factory right near their farm, put food processing plants near agricultural areas and link those food processing units to the rest of the country.

"It's a great idea. They gave it to us, and we will implement it," he said.