For the Muslims in the Congress, the prevailing fervor over the Ram Mandir forces them into quiet submission and acceptance of the now cemented claim of the Hindu majority to Ayodhya. 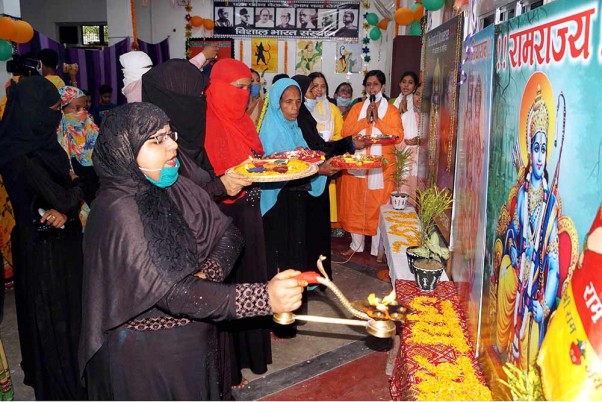 With a majority of their party colleagues, including Rahul Gandhi and Priyanka Gandhi Vadra, waxing eloquent in welcoming the bhoomi pujan of the Ram Mandir in Ayodhya, Muslim leaders of the Congress party are faced with a political predicament. They can join the celebratory brouhaha citing its inevitability given an enabling Supreme Court verdict but, in doing so, run the risk of adding insult to the injury that their community is already nursing under an electorally dominant BJP’s majoritarian politics. Else, they can demand complete implementation of the same Supreme Court verdict that also decreed five acres of land in Ayodhya be given to the Sunni Waqf Board for the purpose of building a mosque as restitution and expeditious completion of the nearly three-decade-old criminal proceedings against BJP-RSS leaders for their alleged role in razing the Babri Masjid. But choosing such a path would undoubtedly push the Congress to a corner, giving the BJP-RSS a chance to accuse the rival of being anti-Hindu.

The response of the Congress party, or at least a substantial chunk of its leaders, to bhoomi pujan presently seems indistinguishable from the euphoria in the BJP. Former Madhya Pradesh chief minister Kamal Nath led a recital of Hanuman Chalisa a day ahead of the religious gala in Ayodhya and exhorted his supporters across the state to join in virtually. Nath is also reportedly sending silver bricks to be used in the construction of the Ram Mandir and believes the late Rajiv Gandhi, who as the Prime Minister in 1989 allowed the temple’s shilanyas, would be “very happy today”.

Nath’s colleague and Congress Rajya Sabha MP Digvijaya Singh too welcomed the bhoomi pujan claiming “it is what Rajiv Gandhi also wanted”. Sundry other Hindu leaders of the Congress have expressed similar views. Though shorn of the overtly Hindu tenor, Rahul and Priyanka too have joined in to chant praises of Lord Ram while subtly reminding Hindutva flag bearers that the Hindu god stood for compassion, brotherhood, unity and syncretism. Rahul refrained from expressly mentioning the Ram Mandir in his statement and instead claimed that Lord Ram can ‘never embody hate, cruelty or injustice’. Congress sources tell Outlook that the party is even considering a high-pitched campaign in UP, under Priyanka Gandhi’s leadership, to “propagate the real message of Lord Ram and convince the people that the BJP’s Hindutva agenda is, in reality, a polar opposite of what Ram and Hinduism stand for”. Priyanka’s message welcoming the Ram Mandir bhoomi pujan as a moment to make a fresh start for inclusion and tolerance is to be read in this light, say sources.

Yet, for the Muslims in the Congress, or indeed those who do not wish to align with this forceful expression of Hindu appeasement, the prevailing fervor over the Ram Mandir presents them a fait accompli; forcing them into quiet submission and acceptance of the now cemented claim of the Hindu majority to Ayodhya. Discordant notes, if any, must be carefully drafted, lest they attract the wrath of the BJP’s formidable cadre or even the disparaging gaze of their own colleagues in the Congress.

Former Union minister Salman Khurshid has been among the few Muslim leaders of the Congress to tweet on the Ram Mandir bhoomi pujan. “The temple-mosque dispute was resolved by the Supreme Court and accepted by the people. The temple is welcome but it must be remembered that the court has also ordered construction of a mosque. The Prime Minister must support both…” Khurshid tells Outlook that his tweet was based on a plain understanding of the apex court’s judgment on the Babri Masjid-Ram Janmbhoomi title dispute. He added that the dispute had gone on for decades and that though what the court finally gave was “approximate justice and not absolute justice, the verdict has to now be accepted by all and used as a way to move forward by putting the bitterness of the dispute behind.” However, Khurshid added that the ideal way of implementing the verdict would have been to “simultaneously begin work on the Ram Mandir and the mosque, in the true spirit of both secularism and the SC verdict, so that while we celebrate the bhoomi pujan for a temple which represents faith for the Hindus, we could also celebrate the construction of a mosque that has been ordered as restitution for the demolition of the Babri Masjid which represents the deep sentiments of the Muslims”.

While Khurshid hopes that the construction of the Ram Mandir and a mosque in Ayodhya will pave the way for a much needed reconciliation between communities, there are others in his party who believe that the BJP-led governments at the Centre and in UP are deliberately delaying the implementation of the SC verdict to its full extent “only to humiliate the Muslims further”.

“With our overzealous messages for the Ram Mandir, we are only becoming a party to this humiliation… we should have remained steadfast on our secular ideology and insisted that work on the temple and mosque should begin simultaneously. We are still fighting a pandemic, there was no hurry to build the temple right away; it could have waited and this time could have been utilised to complete the process of handing over land to the Sunni Waqf Board for a mosque,” says a Muslim leader of the Congress from UP, requesting anonymity.

Congress secretary and MLA from Bihar, Shakeel Ahmed Khan, tells Outlook, “History is a witness to injustice and patience… whatever we do today becomes a matter of historical record in the future. Time will determine how good or bad our actions of today really were, both for ourselves and for the country. If we want real justice for all concerned, why should we hesitate in demanding that the SC verdict be implemented in letter and spirit?”

Khan’s views are echoed by party’s Lok Sabha MP, Mohammed Jawaid, who believes the “politics and atmosphere of hate and religious intolerance that the BJP has created over the past six years has forced votaries of secularism to constantly weigh the electoral implications of their statements… if we demand a mosque as per the SC verdict while also welcoming the Ram Mandir, our message will be read selectively and the BJP will tell people that the Congress is opposing the temple despite a judgment from the court. What do we do then?”

So, is the burden of secularism only to be shouldered by religious minorities? Khurshid tells Outlook, “in an ideal situation, speaking as a principle, the answer is a definite no but then we have to be pragmatic and see the times we are living in. In these times, I personally feel, if Muslims have to shoulder the responsibility of secularism alone for some time to help build a better India, we must do so happily because it is in the service and best interest of the country.”