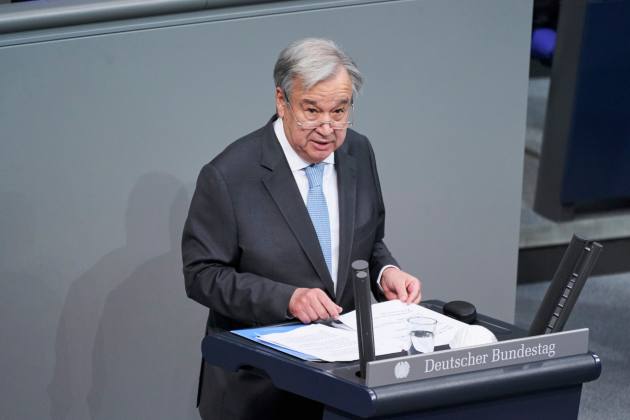 Confronted with its worst crisis since World War II, the UN -- which marked 75 years of its existence in 2020 -- mounted a comprehensive global response to combat the pandemic that saw India, 'the pharmacy of the world', leading from the front as it extended a helping hand to over 150 nations to fight the invisible enemy.

As nations across the world began closing their borders and shutting down businesses in early 2020 to control the spread of Covid-19, UN Secretary General Antonio Guterres said the pandemic was the “fifth horsemen” that added to the fury of the other four horsemen - highest global geo-strategic tensions in years, existential climate crisis, deep and growing global mistrust and the dark side of the digital world.

He described the Covid-19 pandemic as "the greatest crisis of our age" that plunged the world into an acute health and economic crisis, “the severity of which has not been seen in nearly a century".

"We face simultaneously an epochal health crisis, the biggest economic calamity and job losses since the Great Depression, and dangerous new threats to human rights. Covid-19 has laid bare the world's fragilities," Guterres said, adding that the pandemic wiped away the progress of decades.

The UN mounted a comprehensive global response to combat the pandemic.

In this unprecedented moment of crisis, India led from the front with Prime Minister Narendra Modi giving a strong assurance to the global community in his address to the first ever virtual high-level session of the General Assembly in September that as the largest vaccine producing country of the world, India's vaccine production and delivery capacity will be used to help all humanity in fighting this crisis.

"To tackle the health fall out during Covid, India has reached out to the world in real time and assisted more than 150 countries. We continue to do so in myriad ways,” India’s Permanent Representative to the UN, T S Tirumurti, told PTI.

India, recognised as a world leader in vaccines, produces 60% of vaccines globally. With a reputation as the "pharmacy of the world", the country is gearing up to tackle the pandemic on a war footing with a pipeline of several Covid-19 vaccines under different stages of development.

Vaccine candidates COVAXIN and ZyCoV-D are under phase 3 and phase 2 trials, while vaccine manufacturer Serum Institute of India is conducting final testing of the Oxford University-AstraZeneca COVISHIELD vaccine.

In the early months of the pandemic, India supplied anti-malarial drug hydroxychloroquine, identified as a possible treatment for Covid-19, to several countries, including the US.

India, however, questioned where the UN's "effective response" was as the world battled the pandemic.

Modi has asserted that reform in the responses, processes and in the very character of the UN is the "need of the hour" as he questioned for how long will India, the world’s largest democracy and home to 1.3 billion people, be kept out of the decision-making structures of the UN.

With the world heading into 2021 straddling the devastating impacts of Covid-19, Guterres warned that a vaccine alone cannot undo damage that will stretch across years, even decades to come.

He said the threats of rising poverty and the biggest global recession in eight decades are intergenerational impacts not due to Covid-19 alone. “They are the result of long-term fragilities, inequalities and injustices that have been exposed by the pandemic. It is time to reset.”

He also appreciated India's assistance to other nations during the pandemic.

India gave a clarion call to the global community to join hands to show leadership, solidarity and collaboration to deal with the pandemic. "We can respond best by collaboration, not confusion; preparation, not panic and coming together, not growing apart," Ministry of External Affairs Secretary (West) Vikas Swarup told the General Assembly.

The pandemic, which originated in the Chinese city of Wuhan almost a year ago, has so far killed 1.6 million people globally and infected over 76 million.

India stressed that the pandemic laid bare the gaps that exist in global cooperation and governance structures of multilateral organisations and underlined the urgent need for reformed multilateralism.

Reformed multilateralism, effective response to global terrorism and comprehensive approach to peace and security are among India's priorities as it prepares to sit in the most powerful UN organ -- the Security Council -- as a non-permanent member for a two-year term beginning January 1, 2021.

"India's presence in the Security Council is needed at this juncture when there are deep fissures between P-5 themselves and also between other countries. The UN is losing coherence and we hope to bring this back by focusing on issues of priority to all member states," Tirumurti said. The priorities include counter-terrorism and reformed multilateralism.

India, the endorsed candidate from the Asia-Pacific states, overwhelmingly won its UNSC election in June, garnering 184 votes out of the 192 ballots cast.

Modi has said as the world’s largest democracy, India "will always speak in support of peace, security and prosperity. India will not hesitate in raising its voice against the enemies of humanity, human race and human values -- these include terrorism, smuggling of illegal weapons, drugs and money-laundering".