The veteran leader's family has decided to 'fulfil his last wish by taking his ashes to Titabor and then to Brahmaputra and Barak Valleys, Upper and Lower Assam and the North Bank' 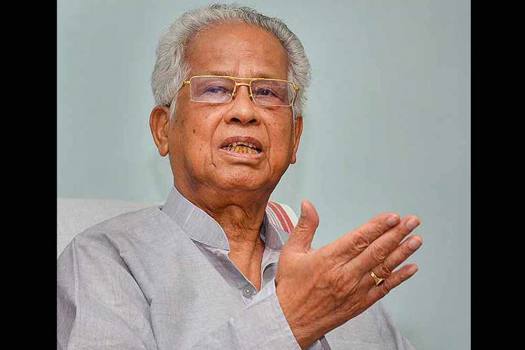 The ashes of former chief minister Tarun Gogoi, who was cremated earlier on Thursday, would be first taken to Titabor assembly constituency, which he had represented for four terms, and then to other parts of Assam, his son Gaurav Gogoi said.

During his final days at the hospital, the state's longest-serving chief minister had told the doctors that he wanted to visit Titabor, and then the other parts of the state, and call a press conference to tell people about the dreams that he had nurtured, Gaurav told reporters after performing the last rites of his father.

"He had a strong desire to visit his constituency, which he had not been able to do due to the illness, and then travel across the state to meet people and to understand their problems," the Lok Sabha MP from Kaliabor said.

The veteran leader's family has decided to "fulfil his last wish by taking his ashes to Titabor and then to Brahmaputra and Barak Valleys, Upper and Lower Assam and the North Bank", he said.

"My father may not be present with us but his ideals, dreams and aspirations for the youth, for the bright future of rural people and the well-being of all sections will continue to be with us. As a son, it will be my responsibility to fulfil the dreams that he had," the Lok Sabha Deputy Leader of the Congress said.

He thanked the people of the state for showering their love on his father and coming out in such large numbers to pay their last respects to him.

He also expressed his gratitude to party Chief Sonia Gandhi for her letter of condolence, leader Rahul Gandhi for personally coming to pay his homage and meeting his mother, AICC General Secretary and in-charge of Assam for attending the last rites, and everyone who helped ensure that necessary arrangements were made and rituals conducted smoothly.

There comes a time in one's life, "when we lose our guardians and this is the truth of life. In my case, I am not feeling sad but my heart and mind is at peace. I am sure that with all the love, honour, respect and blessings showered on my father by the people of the state, his soul will rest in peace," he added.