The curious case of Sumedh Saini, an ex-DGP on the run

The ex-DGP of Punjab who faces murder charges is absconding, leaving his Z+ security detail and the state police clueless 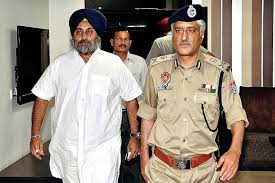 In the wake of no interim protection order from the Punjab and Haryana High Court, Former Punjab Police DGP Sumedh Singh Saini who is facing murder charges is now absconding, despite having Z plus security.

A High Court judge on Friday recused himself from the hearing of an anticipatory bail application moved by Saini in connection with the charges of a custodial death in 1991 while Saini was posted as SSP in Chandigarh. Justice Survir Sehgal, while recusing himself from the case, referred the matter to the Chief Justice for listing. “The matter will now be put before the Chief Justice on September 7 for listing before another Bench”,  Justice Sehgal told Public Prosecutor SS Narula.

Last week, the Punjab Police raided Saini’s house in sector-20 of Chandigarh beside his farm house and other locations in Punjab but could not trace him.

Saini had approached the High Court after his anticipatory bail application was rejected by the additional district and session judge in Mohali on September 1. Saini had separately approached the High Court seeking the quashing of the FIR and directions to declare the subsequent investigation against him by the police in the case as non-est factum.  In this case earlier this week, Justice Amol Tattan Singh too recused himself from hearing the matter.

Now that Saini’s security has been withdrawn and he is absconding,  his wife has showed safety concerns saying that there is a threat to the lives of the family members also.

Meanwhile a senior official of the Special Investigation Team (SIT) probing the case said that there had been no change whatsoever in the security personnel and the jammer vehicles, provided to the former DGP, who is a Z plus category protectee of the State government. “The fact was that Saini seemed to have left his Chandigarh residence without Punjab police security personnel and security vehicles, including the jammer vechicle, on his own, thus jeopardizing his  own security.” Said a senior official.

In May, on the basis of a fresh application by the victim’s brother Palwinder Singh Multani, the former DGP and six other accused were booked under section 364 (abduction in order to murder), 201 (disappearance of evidence), 344 (wrongful confinement), 330 (voluntary causing hurt to exhort confession) and 120B (criminal conspiracy) of the IPC. Later, murder charges under section 302 was added to the FIR, after two co-accused turned approvers. In their statement, they claimed to be eyewitnesses to the torture meted out to Balwant Singh Multani, a former employee of CITCO (Chandigarh Insustrial and Tourism Corporation), under the custody of Saini, who was then SSP of Chandigarh.

In his complaint, Palwinder Singh said his brother Balwant was picked up from his then residence in Mohali on December 11, 1991, and taken to the police station at sector 17 Chandigarh under the orders of SSP Saini. Despite all efforts to secure his release, the family failed to get him rescued due to the terror and influence of Saini”, said the complainant, adding that it was after Saini’s retirement in 2018, they gathered the courage to resume their efforts to fight for justice. But then the Chandigarh Police had claimed that Balwant escaped from the custody at Qadian in Gurdaspur district.

A Former DGP of Punjab, Sumedh Singh Saini has a rich history of policing cases dealing with both terrorism and corruption charges. He has a mixed reputation, being seen by some people as a firm upholder of the law and by others as a violator of human rights. His appointment in 2012, during the 2nd tenure of SAD-BJP led govt the made him then youngest DGP in India.

Nobody Dictates Or Interferes In My Working, says Himachal CM