Data released by the police this week revealed that 466 persons, both men and women, died due to suicide in Himachal Pradesh in the last six months, particularly February and July, 2020. 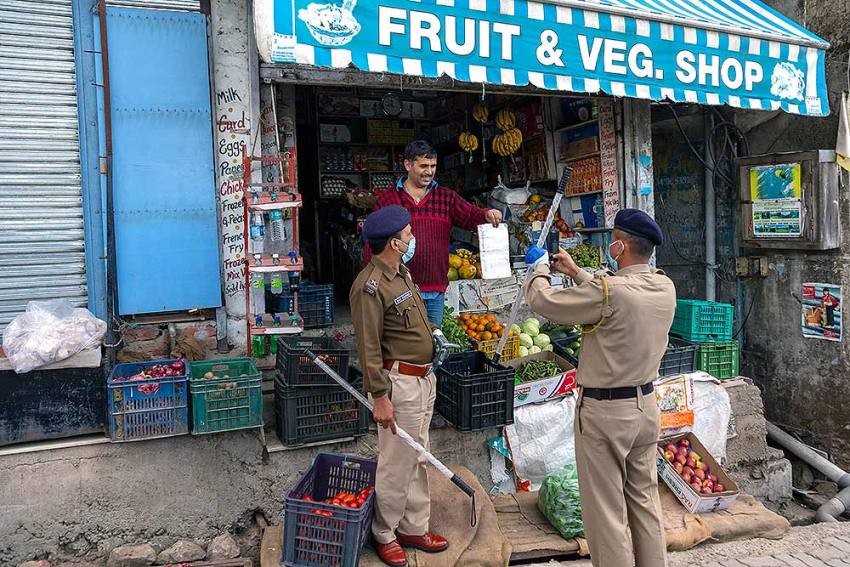 A shopkeeper shows his price list to a policeman who takes a photo of it on his mobile phone during the relaxation in curfew in Dharamsala.
AP Photo
Ashwani Sharma August 10, 2020 00:00 IST Suicide Rates Rise Exponentially In Himachal Pradesh As Economy Continues To Flutter Due To Covid 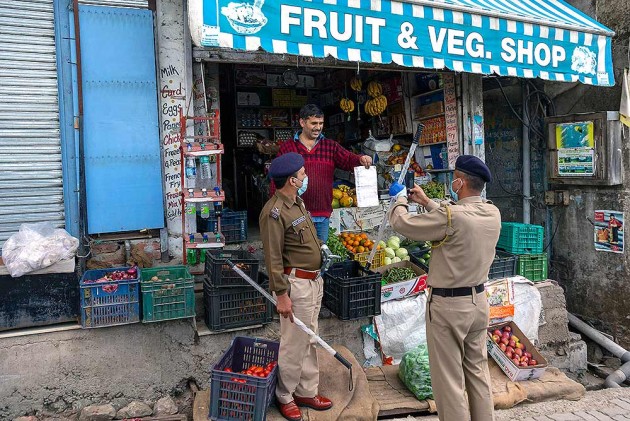 Pictures of a young couple, married barely one-and-a-half-year ago, hanging with a deodar tree in the forests of Rohru, Himachal Pradesh went viral on social media last month, sending shock waves across the state.

The couple committed suicide even as they tightly held on to each other before taking the extreme step. The police later recovered a suicide note that blamed elder brother and his wife for forcing them to take the extreme step – apparently due to a case of property dispute and family conflict.

In another incident, a Twenty-eight-year-old woman committed suicide at Khaniyana village in Kangra district on April 25 as her husband scolded her for venturing out during the Covid-19 pandemic and the resulting lockdown.

Another woman – Jaspreet Kaur, 33, took her life at her house in Shimla town after a tiff with her husband for neglecting their child, who is addicted to the mobile game ‘PUBG’.

The numerous cases have increased the suicide rate in Himachal Pradesh. Data released by the police this week revealed that 466 persons, both men and women, died due to suicide in Himachal Pradesh in the last six months, particularly February and July, 2020. Of these, 349 cases were reported in April, May, June and July.

The break-up also shows an increase in number of monthly suicides since January, which saw just 40 cases. But by end of June, the number had risen to 112 while in July, 101 persons died due to suicide. The number of females taking extreme steps is almost in the ratio of 60:40 as compared to males, which again shows a disturbing trend.

“Primary factor is isolation, both emotional and physical. Despite the overwhelming use of social media, real emotional connections were left wanting. Also, many people found it hard to deal with stress and anxiety related to Job loss, financial liabilities and career issues. Couple this with the extreme sense of vulnerability and you get a perfect recipe for mental health problems,” Says Dr Vikas Dogra, Professor, Journalism and Mass Communication, Himachal Pradesh University.

Profiling the victims on the basis of their age showed that those in the age brackets of 18-35 years (students and those in their early married life) and 35-50 years (those with troubled marriage and hectic professional life) are more vulnerable to taking the extreme step of suicide.

Sanjay Kundu, the Director General of police, said on an average, three persons are committing suicides every day in Himachal Pradesh, a state known for its peace and hospitable living.

Kundu says he had discussed the matter with Chief Minister Jai Ram Thakur, who has asked the police to do an analysis on case to case basis and find-out specific reasons before the state government red-flags the issue to various agencies.

Dr Sanjay Pathak, senior medical Superintendent at Himachal Hospital of Mental Health and Rehabilitation, Shimla believes that during the lockdown period many people committed suicides due to loss of avocations, anxiety and depression.

“I think we need to look at these cases deeply and address the issue. Many youths have lost jobs during the lockdown. Shutting down of businesses, rising debt and family tensions have also added to the compelling reasons,” he opines.

An employee at Baddi industrial area had committed suicide as the contractor did not pay his wages for two months of lockdown. A 36-year-old debt-ridden shopkeeper hanged himself in Kullu district as he had incurred losses at his cloth shop, which he was forced to shut due to the Covid-19 lockdown. He was unable to repay the loan taken from banks and individuals.

Dr Pathak talks about a helpline ‘104’ started by the department to provide counselling to affected citizens to deal with the stress and anxieties.

But, many also attribute it partially to drug and alcohol problem among youths. Teenagers, girls included, were found to have died due to suicide for not doing well in the studies, being scolded by parents, being denied pocket money or failure in love affair.

Superintendent of Shimla police, Umapati Jamwal, said “The police have done detailed investigations in some cases in Shimla district. Family conflict and alcoholism were factors in case of adult males. Whereas, in cases of females, atrocities committed against them, neglect, domestic violence and financial insecurity were some of the reasons. Nepali labourers, in state of excessive alcoholism, also impulsively end their lives.”