Akhilesh Yadav was trying to take a flight from Lucknow to Prayagarj to attend an event at the Allahabad University. 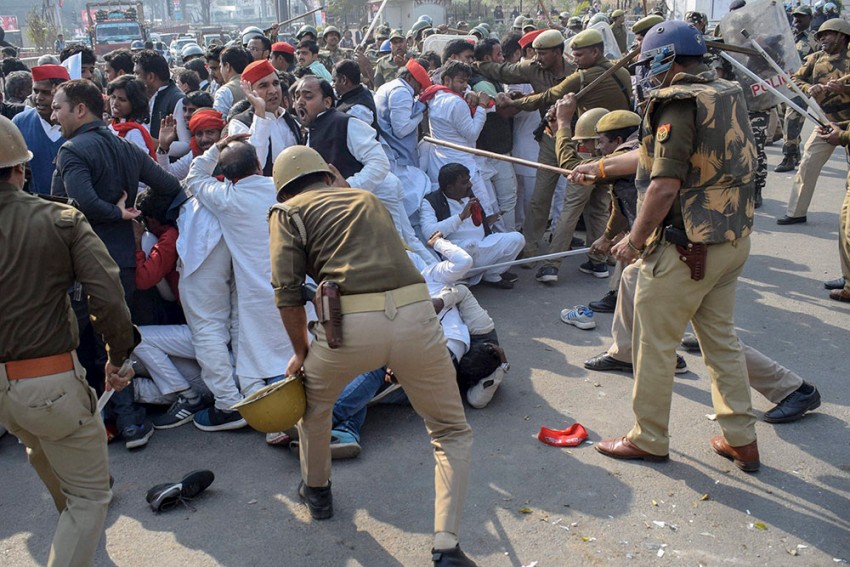 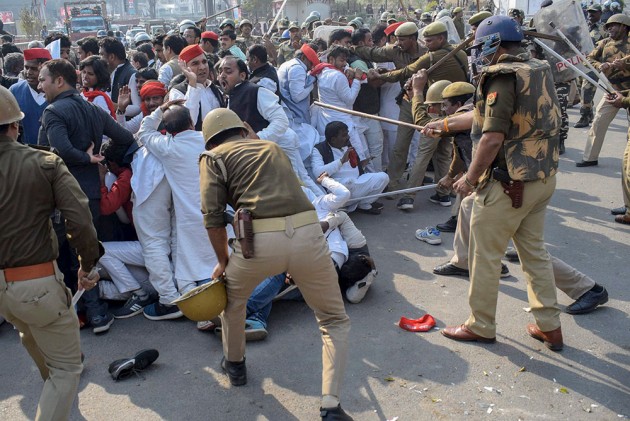 Samajwadi Party president and former Uttar Pradesh Chief Minister Akhilesh Yadav said on Tuesday he was stopped by authorities at Lucknow airport in a bid to prevent him from visiting Allahabad.

Yadav said he was to fly to Prayagraj, earlier known as Allahabad, from Chaudhary Charan Singh International Airport to attend an event at the Allahabad University.

Addressing a press conference in the evening, the Samajwadi Party chief alleged that the Centre was "involved" in preventing him from flying to Prayagraj.

"This is work of the Centre. I think government at the Centre is also involved in stopping me. The state police cannot enter airport as its security is in Centre's hand. Despite this police reached there and stopped me without any written order," he said.

"I haven't been given a reason why but it seems the general impression was that I would create a law and order problem. The CM has given a statement to this effect but they are using this as a cover to hide their nervousness because our youth have had enough," he claimed.

The SP chief said that had there been a genuine problem, the police would have objected, or asked for a change in his schedule and he asserted he would never do anything to endanger the safety of people and property.

After the news of his detention, protests broke out in Allahabad, Jaunpur, Jhansi, Kannauj, Balrampur, Jalaun and Gorakhpur, among other places, where SP supporters smashed windscreens of vehicles and clashed with the police.

Earlier, Chief Minister Yogi Adityanath told reporters outside the state Assembly that Yadav's visit could have triggered violence between rival student groups at the Allahabad University.

On being asked to comment on Adityanath's claim, Yadav said, "I was told I will spread hatred and violence. I challenge them to show even one such charge against me, compared to Chief Minister Yogi Adityanath who has so many charges against him. It is the beauty of our democracy that we are seeing a sitting CM with so many cases against them."

Earlier during the day, sharing a photo on Twitter, the former Chief Minister said, "I was prevented from boarding the airplane without any written orders. Currently detained at Lucknow airport.

It is clear how frightened the govt is by the oath ceremony of a student leader. The BJP knows that youth of our great country will not tolerate this injustice anymore!"

Photos shared by Yadav show a police officer standing at the stairs of the aircraft, blocking the path to boarding.

I was prevented from boarding the airplane without any written orders. Currently detained at Lucknow airport.

It is clear how frightened the govt is by the oath ceremony of a student leader. The BJP knows that youth of our great country will not tolerate this injustice anymore! pic.twitter.com/xtnpNWtQRd

Later, the Samajwadi Party chief released a statement over his detention, calling it "the remote control politics of two and a half men".

"But, to be stopped from speaking, from asking questions that are on everyone's lips- to be prevented from engaging with the youth is just another clear sign of how scared the government is," the statement said.

My statement on the negative and undemocratic politics behind my detention at Lucknow Airport. pic.twitter.com/dP7MvdjOcT

Commenting on Yadav's detention,  BSP supremo Mayawati said it was extremely condemnable and asked whether the ruling BJP was afraid of their alliance because of which it is "resorting to anti-democratic methods".

Mayawati described the episode as "an example of total dictatorship of BJP government".

"This is very unfortunate and this undemocratic step will be fought at all levels," she said.

"Is the BJP government at the Centre and in Uttar Pradesh so afraid of BSP-SP alliance that it is resorting to anti-democratic methods to curb our political activities," she asked.

The issue was also raised at the Uttar Pradesh legislature.

"The present regime is trying to kill democracy and stop our leader from visiting Allahabad," SP leader Narendra Verma said.

The members also trooped into the Well, prompting Speaker Hriday Narain Dixit to adjourn proceedings for 20 minutes. It was later extended for the entire Question Hour.

When the House reassembled, agitated SP members again rushed to the Well and sat on a dharna, shouting slogans against the Yogi Adityanath government.

BSP leader Lalji Verma also supported the SP members, saying "there is an anarchic government in the state which wants to suppress the voice of Opposition."