Home  »  Website  »  National  »  Silence Of The Abdullahs: Is Coronavirus A Cover?

Silence Of The Abdullahs: Is Coronavirus A Cover?

Some political observers feel the Abdullahs are using the Coronavirus as a cover. If the pandemic had not hit India and the world, they would have been under pressure to explain their position to the people of Jammu and Kashmir. 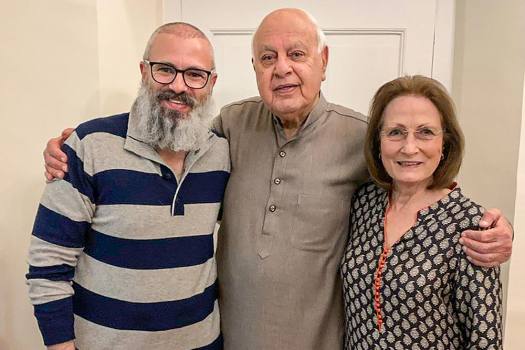 National Conference leader Omar Abdullah poses for a photograph with his father and party chief Farooq Abdullah and his mother Molly Abdullah after he was freed from detention.
PTI Photo
Naseer Ganai April 03, 2020 00:00 IST Silence Of The Abdullahs: Is Coronavirus A Cover?

Soon after his release from detention on March 24, the first thing former Chief Minister of Jammu and Kashmir Omar Abdullah did was change his bio-note on his Twitter handle. “Former PSA Political detinue, former CM of J&K state, former Union Minister, former MP, former MLA. Vice President JKNC. Tweets are my own,” Omar wrote. He seemed to indicate that unlike his father Farooq Abdullah, he would continue to talk about political issues. Farooq Abdullah had gone completely mum after his release.

Initially, Omar was voluble after his release, tweeting both political and lighter missives. For instance, he tweeted: 'On a lighter note if anyone wants tips on surviving quarantine or a lockdown I have months of experience at my disposal, perhaps a blog is in order.' But now he, too, seems to have followed his father's mantra of keeping silent.

Also Read: In A Different Kashmir, A Free Farooq Abdullah Chooses To Stay Mum On Politics For Now

Political observers had said it was the bargain the senior Abdullah had agreed to for his release. Political scientist Rekha Chowdhary, for instance, had said in a post, “in the political environment that exists now, withdrawal of his (Farooq Abdullah) detention order would not have been without the assurance that he is not going to be too critical of the government and its acts."

But now she has had a rethink. “They are doing the right thing by not talking about politics at this time. People are concerned about ventilators now not politics," says Chowdhary. A senior National Conference leader agrees. “I don’t think at this juncture, when the coronavirus crisis is upon us, talking about political issues would help,” he says.

But others feel the Abdullahs are using the coronavirus as a cover. If the pandemic had not hit India and the world, they would have been under pressure to explain their position. “They must be relieved. The NC leaders would call themselves Sher (lion), Sheikh Mohammad Abdullah was referred to as Sher-e- Kashmir (lion of Kashmir). The Abdullahs have turned into lambs and theirs is the silence of the lambs," says a politician from the opposite camp.

Ghulam Hassan Mir, a senior leader of the newly formed Apni Party says it's best to leave the Abdullahs alone for now. At least they are not parroting the NCs old line of autonomy for the state.  "They should not indulge in emotional politics and should talk about realistic politics. They should inform people about the new realities and this will help Kashmiris," he says. Over to the Abdullahs now.