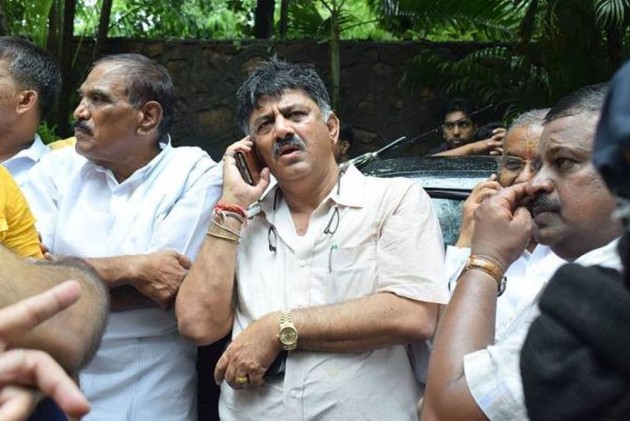 A bench comprising Justices R F Nariman and S Ravindra Bhat rejected the request of the Solicitor General, appearing for the Enforcement Directorate (ED), to issue a notice to the other side on the appeal.

Shivakumar was arrested by the ED on September 3.

He was in judicial custody as the trial court had denied him bail in the case.

The high court had granted him bail saying he "cannot tamper with the evidence as the documents are with the investigating agencies".

The ED had opposed his bail plea saying he was an influential person and he could tamper with evidence and influence witnesses if released.

Shivakumar, a seven-time MLA in Karnataka, was booked along with Haumanthaiah -- an employee at Karnataka Bhavan in New Delhi -- and others for alleged offences under the Prevention of Money Laundering Act (PMLA).

The case was based on a charge sheet filed by the Income Tax Department against them last year before a special court in Bengaluru on charges of alleged tax evasion and 'hawala' transactions worth crores or rupees.

The I-T department has accused Shivakumar and his alleged associate S K Sharma of indulging in transactions involving huge amounts of unaccounted money on a regular basis through 'hawala' channels with the help of three other accused.