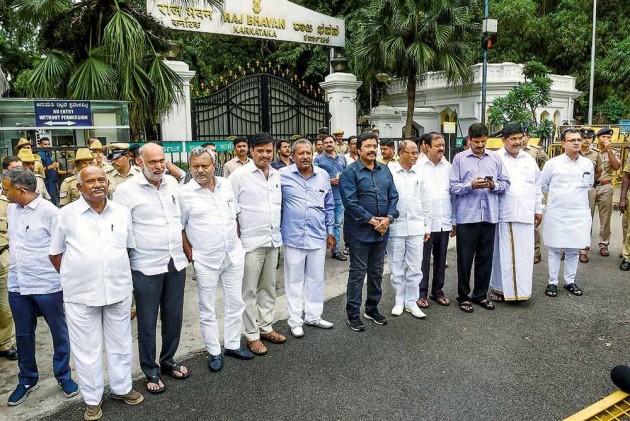 The rebel Karnataka Congress and Janata Dal-Secular (JD-S) legislators are en route to Bengaluru from Mumbai to abide by the Supreme Court's directives to appear before the Karnataka Assembly Speaker by 6 pm.

The rebel Karnataka MLAs said they would meet the state Assembly Speaker but would not withdraw their resignations.

Reacting to the apex court's directive, rebel MLA Byrathi Basavaraj said that they would meet the Karnataka Assembly speaker by 4 pm.

Asked whether the Bharatiya Janata Party (BJP) was behind their decision to resign from the Karnataka Assembly, Basavaraj said, "The BJP is not behind our decision. It has nothing to do with the BJP."

Earlier today, the Supreme Court asked the rebel Karnataka MLAs "to meet the Karnataka Assembly Speaker at 6 pm and submit their resignations if they so wish."

The apex court also said the Karnataka Speaker must take a decision today. The Court adjourned the hearing for tomorrow.

The legislators were lodged in Mumbai under tight security at the Hotel Renaissance for the past three days. They almost remained virtually incommunicado with their respective party leaders.

On Wednesday, the legislators sparked off a high-drama in Mumbai after they wrote to Police Commissioner Sanjay Barve, alleging that they received threats after learning that Karnataka leader D.K. Shivakumar and others were planning to storm the hotel premises.

In a day of fast-paced developments, police detained Shivakumar, his ministerial colleague, two legislators and Mumbai Congress leaders for several hours on Wednesday.

Late in the evening, Shivakumar and others were 'deported' to Karnataka while police enforced prohibitory orders around the hotel premises to pre-empt any action by the local Congress units.