Nafisa Attari was earlier sacked by Neerja Modi School in Udaipur for a WhatsApp status celebrating Pakistan's T-20 win, along with pictures of Pakistani players.

Rajasthan Police on Wednesday arrested Nafisa Attari, a private school teacher in Udaipur for posting WhatsApp status celebrating the victory of the Pakistan cricket team against India in the T20 World Cup on Sunday.

Nafisa had put out a picture of Pakistani players with the caption, "Jeeeet gayeeee "(They won) On Tuesday, a case was registered against her under IPC section 153B (imputations, assertions prejudicial to national integration) at the city’s Amba Mata Police Station. Police arrested her on Wednesday but released her later on bail against a security deposit of Rs 20,000. The SHO of Amba Mata police station Narpat Singh said, “We arrested her on Wednesday, booked her under IPC section 153B, and produced her before the court. She was later released on a bail.”

A day earlier, Neerja Modi School, where Attari worked, had sacked her for the WhatsApp status. Screenshots of the WhatsApp status went viral, leading to the school taking action against her by expelling her. The chairman of Neerja Modi School, Mahendra Sojatia, confirmed, “Yes, the school management has taken a decision to expel the teacher.” Members of Akhil Bharatiya Vidyarthi Parishad (ABVP), a student group affiliated with RSS, held a protest outside the school premises in Udaipur, demanding the suspension of the teacher. The ABVP members also hoisted an Indian flag as a mark of protest. 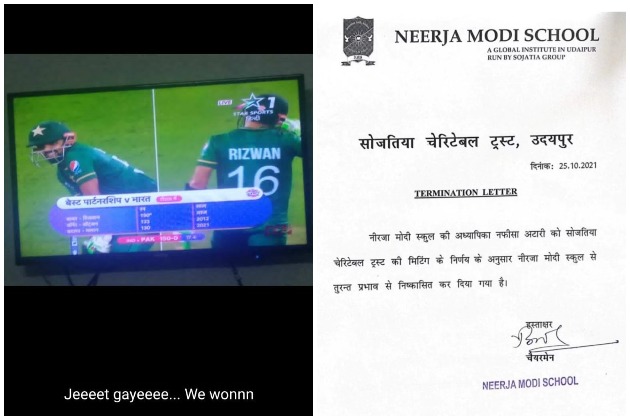 Soon after she was expelled from her job, Nafisa came out with an apology through a video statement. In it, she said she did not mean to hurt the sentiments of anyone. “I’m Indian and proud of my country. Someone asked me if I support Pakistan and I said “Yes”. My response was meant to be taken lightly, hence I included emojis in it. I did not intend to hurt anyone’s sentiments. I’m sorry if I have done so,” Nafisa said in her video statement. Attari added, “As soon as I realised the mistake, I deleted the status message.” She further said that she and her family, who were watching the match together, were divided into two groups supporting different teams, and that the status she had posted doesn’t mean she supports Pakistan.