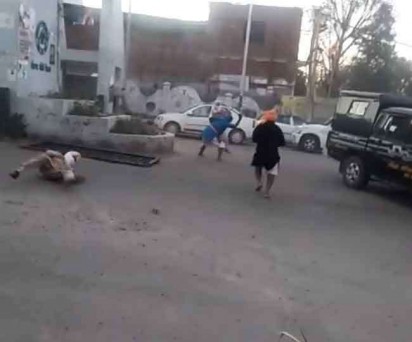 The photo shows a policeman lying on ground, injured, after being attacked by a group of armed men in Punjab
Harish Manav April 13, 2020 00:00 IST Punjab Police Arrest 3 For Provocative FB Post Defending Nihang Attack On Cops

In a swift action, the Punjab Police on Monday arrested three persons for provocative social media messages, promoting religious hatred, in the wake of the brutal Patiala attack on police personnel by a group of Nihangs.

These men, said the DGP, had been indulging in hate propaganda through the social media posts. Bhupinder Singh had posted his inflammatory interview to Apna Sanjha Punjab Facebook TV channel, in which he had defended the Nihang action, but had later removed it, said Gupta. The DGP said the police was also examining the legal options for taking action against the FB channel.

Bhullar and Davinder had also posted inflammatory and vicious statements on FB, lauding the Nihang action and provoking the Nihangs to come forward to launch more such attacks, said Gupta.

Warning of prompt and strict action against anyone found indulging in such hate propaganda and inciting violence against the police or any other section of the society, the DGP said nobody would be allowed to spread hatred or disturb the law and order in the state at any cost. The entire police force was working day and night to enforce the curfew and also provide relief to the needy in these trying circumstances, triggered by the spread of COVID-19, he pointed out.

The police would come down heavily on any violation of the curfew restrictions or any attempt to create trouble in the state, he warned, adding that Chief Minister Captain Amarinder Singh had also issued strict instructions to the Punjab Police in this regard. “We will not tolerate such acts against our police personnel,” the Chief Minister had declared yesterday after the Patiala assault.

The police had earlier arrested one Sudhir Suri of Amritsar and Akash Deep of Patiala for their communal & inflammatory statements and posts.