With polling for 19 of the state’s 40 Lok Sabha constituencies over, the RJD is confident that its grand alliance is set to score big when results are announced on May 23. 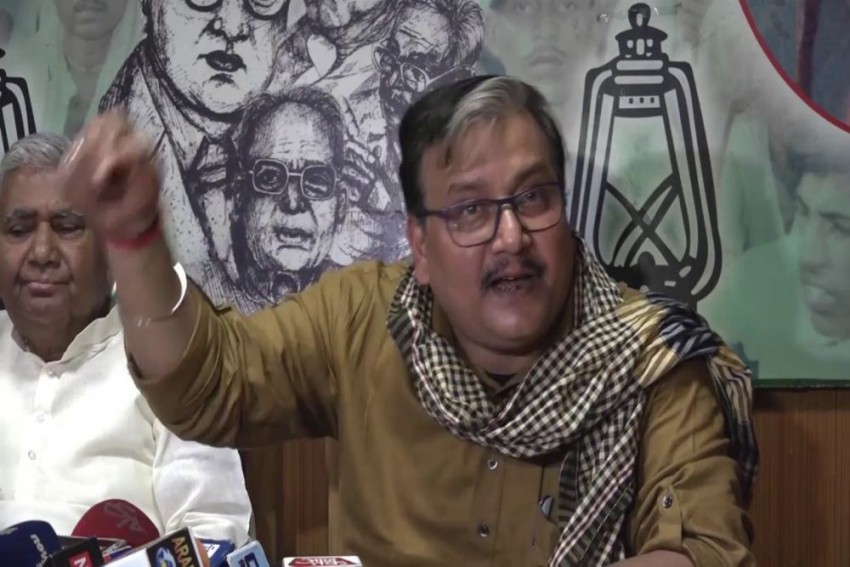 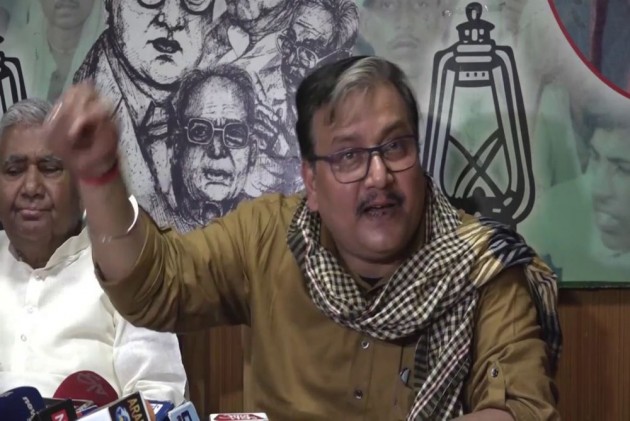 Bihar’s RJD-JD (U) - Congress alliance of 2015, which had halted the Narendra Modi tsunami, may have shattered in July 2017 with Nitish Kumar deserting it to revive his alliance with the BJP. But, the mahagathbandhan template has stayed, even expanded, in the state. In the run up to the Lok Sabha polls, Lalu Prasad Yadav’s RJD earned new allies – RLSP chief Upendra Kushwaha, Jitan Ram Manjhi’s HAM and Mukesh Saini’s VIP – while retaining its pact with the Congress. With polling for 19 of the state’s 40 Lok Sabha constituencies over, the RJD is confident that its grand alliance is set to score big when results are announced on May 23. The party’s Rajya Sabha MP, Prof. Manoj Jha, spoke to Outlook’s Puneet Nicholas Yadav on various aspects of the election battle in Bihar.

What are your impressions of the political scenario in Bihar?

Four phases are over, 19 seats have already gone to polls. The message is very clear. The hollow rhetorical position of Mr. Prime Minister is not gaining traction and that desperation shows on his face. He talks about him being from the lower caste but doesn’t talk about what he had promised in 2014. Any leader, when he or she, conspicuously avoids talking about the promises made in the previous election and clings to a narrative which has no traction on the ground, that tells you that the ground has shifted. There is a tectonic shift happening in Bihar. People are worried about everyday life issues and they don’t see the Prime Minister speaking about it. That is why this election I would consider that the signal is very clear, we are doing phenomenally great.

Bihar was the first state that stopped the Modi tsunami. The mahagathbandhan had swept the assembly polls. Now the alliances have changed. How does this play out?

I am amazed when I see people in the Delhi television studios looking at the arithmetic of the 2014 and 2015 elections. Things are not like that. The vote that Mukesh Saini, the son of Mallah, has – the boatman community, Nishad, Mallah, Nonia, Beldar, etc., people have not known how they vote and this vote is around 12 per cent. They are not counting this vote. They are not counting the Kushwaha-Kurmi community which was not with us earlier. They are not counting Jitan Ram Manjhi or the resurgence in the traditional Congress vote. Now you look at Nitish Kumar, if anyone appears hugely discredited, not even a shadow of himself, it is Nitish Kumar. Top BJP leadership has also realized that he has become a liability. In his rallies there are 400 police force and only 300 people. That tells you about what the carrying capacity of JD (U) is and who Nitish Kumar is. Put together the blocks on their side and on our side. Upendra Kushwaha, Jitan Ram Manjhi, Mukesh Saini have a natural alliance with us because these are social constituencies not simply political parties. I think people in Delhi are not looking at this factor and this might surprise everyone on May 23.

Though there is a JD (U) – BJP alliance, Nitish Kumar is nowhere to be seen during this election campaign.

Who can he blame? Only himself. For the first time in contemporary political history, I saw that we (the RJD-JD (U)-Congress alliance) fought on a common manifesto. It was a straight fight between MGB (mahagathbandhan) and the NDA. People voted for MGB. In spite of us having greater numbers, Lalu ji said he had made a commitment and Nitish will be the chief minister. People in Bihar believed that we voted the MGB on a manifesto. Nitish Kumar robbed that mandate and put it in the lap of the BJP and RSS. That, I believe, was the beginning of the demise of Nitish Kumar. Then he wanted to come back (to the mahagathbandhan) but our concern was how can we rely on a person whose left hand does not know what his right hand does. He has lost all credibility. Wait for May 23; there shall be massive desertion from his party and Nitish Kumar will be a footnote in contemporary Bihar history.

The Begusarai seat has seen a high-pitched election battle. During the alliance talks, Begusarai was a sticking point and finally you did not grant it to CPI’s Kanhaiya Kumar. Couldn’t you have been more generous towards Kanhaiya?

I’ll tell you very frankly. When you ask me a question wrapped in the cult of an individual, I think it is a replication of the Modi model. It’s a personality cult and I am surprised how the Left has fallen for it. People expected us to give up Begusarai. Tanveer (Tanveer Hassan, RJD candidate in Begusarai) had 4 lakh votes in 2014. Our cadre across all assembly constituencies was very keen that Tanveer must fight. He was in the constituency for the last five years. We have five MLAs (in Begusarai). What they (the Left) expected? That we should kill the idea of what our support base wants in Begusarai? I think it’s time for the CPI and CPM to reflect upon where they stand. CPI is a party of two panchayats in an assembly constituency in Begusarai. The CPM doesn’t exist anywhere. CPI-ML on the other hand has a history of people’s struggle. You won’t see the CPI and CPM fighting for the subaltern communities but CPI-ML has been fighting. When MGB won in 2015, CPI-ML won three MLAs and was at the second position in nine seats. The Left leadership is hugely disconnected with the ground realities.

Was Kanhaiya denied a ticket because Lalu Prasad did not want a challenge to Tejashwi’s leadership?

Tejashwi is running a political party in the absence of his father and is the leader of 81 MLAs. He has held over 130 rallies and is single-handedly criss-crossing Bihar. The Left should see who is getting votes. I mean it is good to have these theories here but they have no traction on the ground. Earlier I used to believe that rumour-mongering is the preserve of right-wing politics but the Left – till the last moment in the elections they resorted to tactics which were right-wing; spreading rumours that Tanveer has conceded, giving full page ads across all newspapers two days before polling. Who is paying all this money? And then they want us to believe that is Left politics. I am sorry but this is right-wing politics coming out of the Left.

This is one election where the RJD doesn’t have Lalu Prasad on the ground to mobilize RJD cadres. How much of an impact will that have?

It’s not just about the family or the party missing Lalu ji. Even the media and the people at large are missing him. I’ll tell you why. In last 30 years I have not seen a communicator like him. We use very complicated terms to reach out to people but he is a master of his craft. Tejashwi has taken on that role now and filling that void. But more importantly, it is the people of Bihar who are realizing why Lalu Prasad Yadav is deliberately being kept out and the message has reached the voters. The possible demise of NDA lies here.

Many believe that the RJD could have contested and won more seats in Bihar but is contesting on only 19 seats. You’ve given seats to allies that they possibly didn’t deserve and there is an impression that this could derail ambitions of the mahagathbandhan to defeat the BJP.

We were not only making a political alliance. We were stitching a social, community based alliance. When you build a community-based alliance, you need to be large hearted. Mukesh Saini is contesting for the first time under the banner of his party. If we had not given him three seats, the message would not have gone to the entire boatman community that this is our party. So is the case with Kushwaha and Manjhi. We wanted to build a robust, rainbow coalition.

But you broke your alliance with the Congress in the past because Lalu didn’t want to give it more than four seats. Now you have given the Congress nine seats.

We took three factors. What has been the historical trend of those constituencies? What is the support base’s demand? Winnability. In the negotiations, we discussed seat by seat and ultimately Congress got nine seats. Wait for the day. The Congress will have a wonderful strike rate. This wasn’t an overnight exercise. People asked why are you delaying it (finalizing the seat-sharing) – it was because we took into account a lot many factors which those outside the process didn’t realize and we are going to win across Bihar so handsomely that it is difficult to say whether the NDA will even get double figures.

In 2014, we saw a person-centric campaign by Narendra Modi and this election there seems to be a re-run of the same. Can the BJP’s campaign succeed again?

People of India are smarter than what political analysts think. They have a strong sense of till what time they should pose faith in a leader. Narendra Modi has been a failure on all fronts. Even his strongest supporter can’t defend him on unemployment, economy and agrarian distress. There lies the story. When Sakshi Maharaj said that there will not be any election after 2019; that scared many people. This election is a choice between whether there will be no election in the future or there will be elections. It is a choice between rule of law or rule by the whims of Modi and Amit Shah.

You have had the experience of Nitish Kumar breaking his alliance with the RJD and going back to the BJP. After May 23, are you absolutely certain that Upendra Kushwaha or Jitan Ram Manjhi who were earlier with the BJP will not desert you?

When people in this election chose sides, they chose sides after conscious deliberations. If Kushwaha ji left NDA, he has burnt all bridges. If Manjhi ji is here, he has decided on a principled commitment.

But that was said about Nitish Kumar too.

Nitish Kumar was a textbook example and I hope such examples don’t come back again. There is so much of anger and collective solidarity against the dictatorial style of Modi and Amit Shah. I will not be surprised if there is a coup within the BJP. Don’t discount that factor. People are waiting in BJP for their Achche Din and not the Achche Din of Modi and Amit Shah. They will be the first ones to raise the banner of revolt. They have suffered enough.

'Would Rather Kill Myself Than Help BJP,' Says Priyanka Gandhi