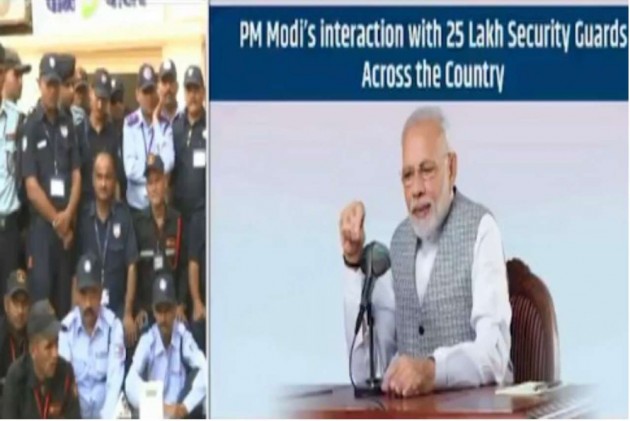 On March 20, to support the BJP’s ‘Main Bhi Chowkidar’ poll slogan, Prime Minister Narendra Modi held an ‘audio interaction’ with 25 lakh security guards across the country. Or at least that’s what reports in sections of the media would have people believe. Except that, what really seems to have happened, as it has now emerged, was that the whole thing was more of a gimmick orchestrated by a BJP MP.

In fact, the Central Association of Private Security Industry (CAPSI) - an apex body representing 22,000-odd companies in the sector which employs about 8.5 million private security guards – has termed the so-called interaction “a real fraud” played upon the “chowkidars”.

In a letter dated March 29 sent to the Prime Minister’s Office by CAPSI, a copy of which was accessed by Outlook, its chairman Kunwar Vikram Singh pointed out that the private security guard fraternity was quite excited on getting information that the PM would interact with them through an ‘audio bridge’, and they kept waiting for the event to start on the designated day.

PM Modi Is Leading Chowkidar Campaign, But Govt's Own Project To Train Security Guards Is Mired In Controversy 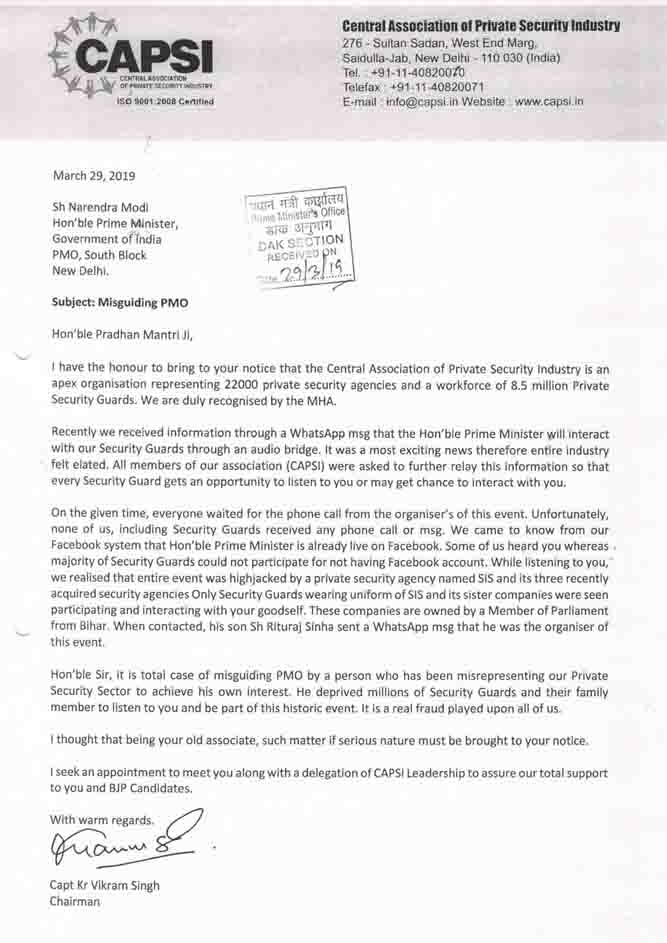 It was then discovered that the ‘audio interaction’ was actually happening through a Facebook live stream, which, the letter points out, could not even be accessed by most security guards since they don’t have accounts on Facebook.

What was of even more serious concern, CAPSCI says, was the fact that the entire event was actually "hijacked" by a security firm founded by a BJP MP, RK Sinha, and being run by his son Rituraj Sinha, and its three recently-acquired companies. This firm goes under the name Security and Intelligence Services (SIS).

The letter says that Rituraj Sinha admitted, in a message to a WhatsApp group of CAPSI members, that he organised the whole event.

Outlook tried to speak to Sinha but he didn’t respond.

The letter alleged that Sinha, due to his proximity to the Prime Minister, misguided the PMO and arranged the PM’s interaction with about 500 guards of his own company and its sister concerns.

“He deprived millions of security guards and their family members to listen to you and be a part of this historic event,” Singh writes in his letter to the PM, alleging that it was a “real fraud played upon all other guards”.

When contacted, Singh told Outlook that he wrote to the PM to express the pain and anguish of lakhs of private guards who were left disappointed on not being able to even listen to the PM, let alone interact with him.

“A few of them were even hoping to get direct calls from the PM, as they were given to understand the same,” says Singh, adding that he has requested for an appointment with the PM so that he can apprise him of the manipulation that his own member of the party has played on him.