Modi and Xi will have around six-hours of one-on-one free-wheeling talks, officials said. 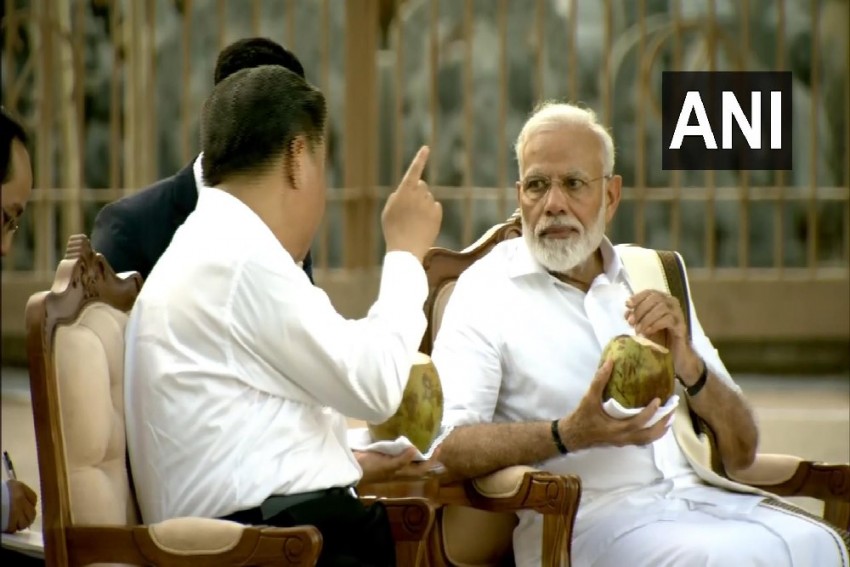 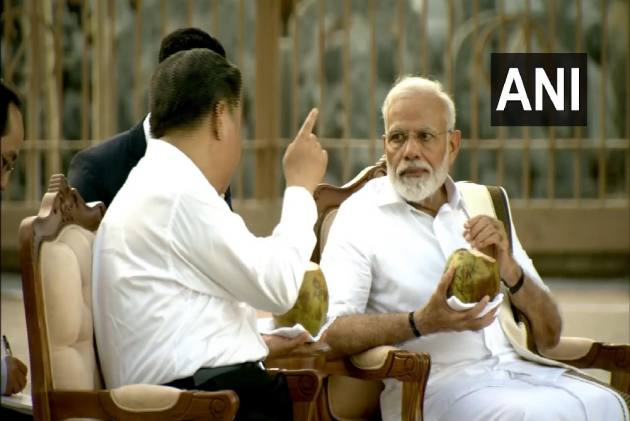 In the backdrop of the seventh-century monument of Pancha Ratha, overlooking the Coromandel Coast of Bay of Bengal, Prime Minister Narendra Modi and Chinese President Xi Jinping on Friday took a stroll and sipped fresh coconut water in a relaxed informal setting, creating positive atmospherics in bilateral ties strained over the Kashmir issue.

Dressed in a Tamil attire of Veshti (dhoti), white shirt and an angavastram, Modi played the perfect host and took Xi for a guided tour of the famous world heritage sites of Arjuna's Penance, Krishna's Butterball, the Pancha Ratha and Shore temple.

The prime minister explained to the Chinese leader the historical significance of the monuments and Xi was seen showing a keen interest in the monuments built during the Pallava dynasty in this coastal town which had historical links with China's Fujian province.

Modi and Xi, assisted by one translator from each side, sat down for around 15 minutes at Pancha Ratha complex, an example of monolithic Indian rock-cut architecture, and engaged in intense talks while sipping coconut water - images reflecting warmth in personal chemistry between the two leaders of two emerging economies.

From Pancha Ratha, the two leaders visited the beautifully lit-up Shore temple - a symbol of cultural heritage of the Pallava dynasty. After spending some time together, Modi and Xi were joined by top delegates of both sides.

Minutes later, the two leaders witnessed a cultural performance in the backdrop of the Shore temple.

A brief cultural ceremony reflecting Tamil Nadu's cultural heritage was organised at the airport to welcome the visiting leader.

Shortly after Xi's aircraft touched down in Chennai, government sources said the two leaders are expected to issue some directions at the end of the summit on Saturday as they did after the first edition of new format of engagement in Chinese city of Wuhan last year.

The two leaders will have around six-hours of one-on-one free-wheeling talks, officials said.

On Saturday morning, Modi and Xi will have a comprehensive one-on-one meeting to be followed by delegation-level talks. Both sides will, then, issue separate statements on the outcome of the summit.

"Both sides know that a lot is riding on the relationship and this is reflected in the summit being held on schedule despite speculation of its postponement in recent weeks," said a senior official on condition of anonymity.

A China-Pakistan joint statement issued after talks said China is paying "close attention" to the situation in Kashmir and that the issue is a dispute left from history, and should be properly and peacefully resolved based on the UN Charter.

The comments angered India as it asserted that Jammu and Kashmir is an integral part of the country and China is well aware of New Delhi's position.

Officials on both sides said the focus of the Modi-Xi summit would be to insulate the bilateral trade and development cooperation from differences on Kashmir and vexed boundary issue.

They said ways to bolster counter-terror cooperation, trade and enhancing cooperation between militaries of the two countries along the 3,500 KM border will be key focus of the talks.

This is the second edition of the informal summit between Modi and Xi. The first informal between the two leaders was held in picturesque Chinese lake city of Wuhan in April 2018, months after a 73-day face off between the armies of the two countries in Doklam tri-juction raised fears of a war between the two Asian giants.

Mamallapuram, a town with strong trade linkages with China's Fujian province, has been spruced up and brought under un unprecedented security cover – in the process inconveniencing local people as well as tourists.

After Murshidabad Killings, BJP To Meet President, Amit Shah Over 'Breakdown' Of Law And Order In Bengal