The Opposition party also demanded that PM Modi should immediately announce the suspension of the three 'anti-agriculture' laws. 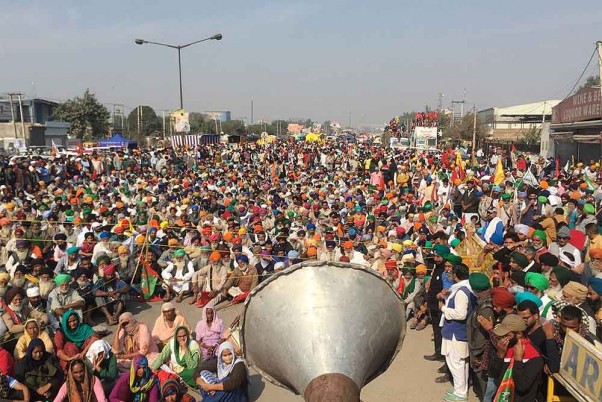 Hitting out at Prime Minister Narendra Modi for reiterating that the new agri laws are beneficial for farmers, the Congress on Sunday said the insistence in support of the legislations shows that the government is "drunk with power" and is rigid even in reconsidering the laws.

The Opposition party also demanded that Prime Minister Modi should immediately announce the suspension of the three "anti-agriculture" laws.

"The prime minister's obduracy, arrogance and rigidity in dealing with 62 crore farmers and farm labourers of India is writ large by his insistence today in the 'Mann ki Baat' that the three anti-farmer, anti-agricultre laws, forcibly passed in an illegal and unconstitutional manner, by Parliament, are correct," Congress' chief spokesperson Randeep Surjewala said at a press conference at the AICC headquarters here.

"For the prime minister to say that these three laws are absolutely right when lakhs and lakhs of farmers are sitting around Delhi agitating, demanding their withdrawal, shows that the Modi government is drunk with power and Prime Minister Modi does not care about the welfare of the farmers and farm labourers of India," he said.

It shows that a government "drunk with power" is rigid even in re-contemplating and reconsidering the three "anti-agriculture black laws".

Surjewala's remarks came hours after Prime Minister Modi, in his monthly 'Mann ki Baat' broadcast, asserted that these reforms have opened doors of new opportunities for farmers and bestowed on them new rights.

Modi also said the farm laws have begun mitigating the troubles of farmers in a short period of time since their enactment in September as he cited the example of a Maharashtra farmer who used their provisions to get the money a trader had promised but not paid to him in time.

Surjewala also hit out at Union Home Minister Amit Shah for attending a political event in Hyderabad but not reaching out to farmers immediately.

"If the home minister of India has time to travel 1,200 km to Hyderabad to attend a public meeting, why does Amit Shah does not have the time to go 15 km to the borders of Delhi and talk to the agitating farmers, why is it that the agriculture minister has taken out a date of December 3 before which no conversation can be held, have they consulted an astrologer for this purpose," the Congress leader said.

Posing several questions to the Modi government, Surjewala asked why "12,000 FIRs have been lodged against farmers" and why is that that no dialogue is taking place with them.

He accused the BJP leaders and chief ministers of branding farmers as "terrorists" and asked why is it that select TV channels "aided and abetted by the Modi government are out to prove 62 crore farmers are anti-nationals".

Surjewala alleged that the three farm laws tantamount to finishing the minimum support price mechanism which he said "will be a death knell for the interest of the farmers".

"But prime minister has bitten more than he can chew because when 62 crore farmers rise in unison, the 'Delhi darbar' will be unseated and that is not a warning, that is a challenge to the prime minister," he said.

The Congress demands that Prime Minister Modi should immediately announce the suspension of the three anti-farming laws and all the "12,000 cases" against farmers be unconditionally withdrawn, Surjewala said.

He said the prime minister and Haryana Chief Minister Manohar Lal Khattar should apologise for the treatment meted out to farmers and the PM should personally speak with the delegation of farmers.

After spending another night in cold, thousands of farmers continued to protest against the Centre's new agri laws on the fourth consecutive day on Sunday staying put at the Singhu and Tikri border points, with farmer leaders deliberating upon their future course of action about proposed talks with the government.

The three farm laws are - The Farmers’ Produce Trade and Commerce (Promotion and Facilitation); The Farmers (Empowerment and Protection) Agreement of Price Assurance; and Farm Services and The Essential Commodities (Amendment).

Farmers say they are apprehensive that the laws will pave way for the dismantling of the minimum support price system, leaving them at the "mercy" of big corporates.